Shop - UNICORN : The Memoir of a Muslim Drag Queen 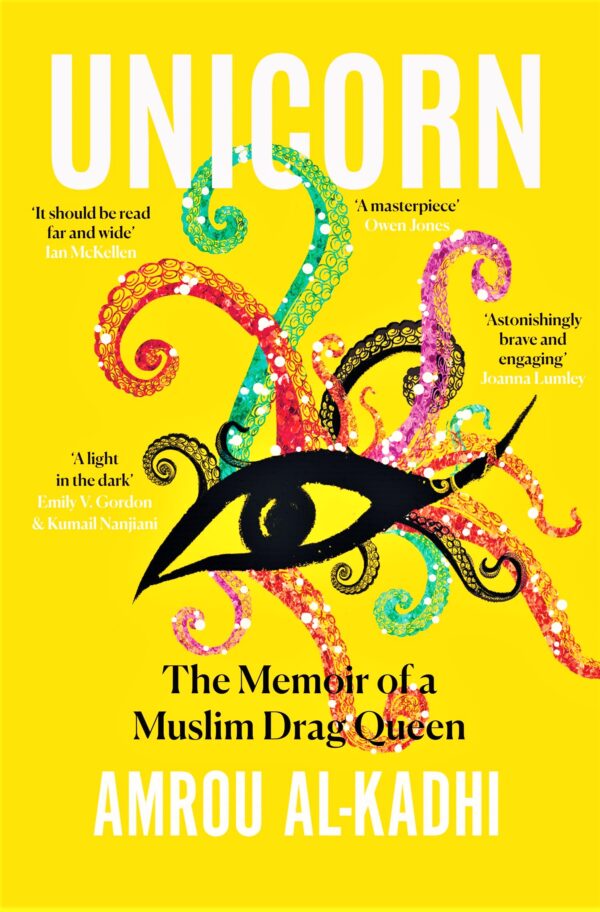 UNICORN : The Memoir of a Muslim Drag Queen

TRUTH : 13 Reasons To Question Everything You Are Told (Sean-12)

ONE MORE THING : Stories And Other Stories

A Painful Journey From Shame To Pride And Everything In Between

A heartbreaking and hilarious memoir about the author’s journey from a god-fearing Muslim boy to a proud, queer drag queen and also a fight to be true to himself.

This is a brilliant book. It’s heartbreaking, funny and beautifully written. Following the story of Amrou (or Glamrou when in drag), the memoir is an exploration of conflicting identities: Muslim, queer, non-binary, Arab, drag queen. With an unflinching gaze, Amrou examines their life from childhood until the present, focusing particularly on their relationship with Mama (role model and inspiration) and with friends and partners.

The Eton-educated, non-binary British Iraqi had always struggled with their identity, until they discovered drag. Yet the 29 year old says the performances come at a high price. Amrou knew they were gay when, aged ten, they first laid eyes on Macaulay Culkin in Home Alone. It was love at first sight. From that moment on, Amrou began searching in all the wrong places for ways to make their divided self whole again.

My name is Amrou Al-Kadhi – by day. By night, I am Glamrou, an empowered, confident and acerbic drag queen who wears seven-inch heels and says the things that nobody else dares to.

Growing up in a strict Iraqi-British Muslim household, it didn’t take long for me to realise I was different. When I was ten years old, I announced to my family that I was in love with Macaulay Culkin in Home Alone. The resultant fallout might best be described as something like the Iraqi version of Jeremy Kyle. And that was just the beginning.

This is the story of how I got from there to here. You’ll read about my teenage obsession with marine biology, and how fluid aquatic life helped me understand my non-binary gender identity. You’ll read about my scholarship at Eton college, during which I wondered if I could forge a new identity as a British aristocrat (spoiler alert: it didn’t work). You’ll read about how I discovered the transformative powers of drag while at Cambridge university; about how I suffered a massive breakdown after I left, and very nearly lost my mind; and about how, after years of rage towards it, I finally began to understand Islam in a new, queer way.

Most of all, this is a book about my mother, my first love, the most beautiful and glamorous woman I’ve ever known, the unknowing inspiration for my career as a drag queen – and a fierce, vociferous critic of anything that transgresses normal gender boundaries. It’s about how we lost and found each other, about forgiveness, understanding, hope – and the life-long search for belonging.

Life as a Unicorn is a hilarious yet devastating story of a search for belonging, following the painful and surprising process of transforming from a god-fearing Muslim boy to a queer drag queen, strutting the stage in seven-inch heels and saying the things nobody else dares to …

Amrou Al-Khadhi writes a remarkably poignant, profoundly moving and unflinching memoir of his challenging life coming from an Iraqi Muslim conservative family to become Glamrou, an exuberant, confident, acerbic, gay drag queen, saying all the things that Amrou himself cannot.

It begins with a performance in Edinburgh that is to prove pivotal in re-evaluating himself in terms of his religious faith, family and sense of identity, when a group of hajib wearing Muslim women in the front row result in him falling apart backstage.

Amrou and Rafy are twin brothers, with Amrou growing up close to his beloved fashion conscious mother and all things feminine, and Rafy closer to his father, and all things masculine, such as football.

In this memoir, he reflects, warts and all, on growing up constantly seeking the attention and love of his mother, the hostility to who he is and the policing of his sexuality by his family, attending Eton, and going to Cambridge, where he helped establish the drag troupe, Denim and the character of Glamrou, and his mental health issues.

Amrou outlines his traumatic and damaging years at Eton with its racism, bullying, Islamaphobia, and some of its controlling and manipulative students that reinforced his personal sense of failure, worthlessness and fuel his growing self hatred, where his dreams to identify as a English gentleman are destined to burn to ashes right from the start.

He portrays his experiences with drugs and chemsex, giving the reader a well thought out, painful but insightful look at what being a man entails, masculinity, and the gay community, with its well known homophobia, racism, the often problematic perceptions of drag queens, and the surrounding issues of power and control, and its cultural biases against Islam.

Amrou brings a meaningful level of context and critique to their own story – not simply describing the extraordinary experiences of their life but the meaning and reasoning behind their actions. A justified level of criticism is directed at their family as well as the patriarchal society and Islamophobia in Britain, but also at how Amrou participated in that prejudice after internalizing these sentiments.

This self-critique shows an admirable level of maturity and understanding. There’s also something so lively and playful about Amrou’s tale which finds humour in the many missteps and confusion there has been along the way while taking seriously the blistering pain of growing up queer and misunderstood.

It is with a sense of relief that we read of how Rafy helped Amrou and his parents come to terms with each other and reconnect, It was particularly touched by how Amrou slowly becomes aware of the pressures that his mother faced with his father, and of the partriarchal system that deny women the right to be who they are.

There was so much sadness in this book. Most upsetting was how Amrou’s parents reacted with such emotional cruelty. They’re not bad people but their cultural background and respectable position in society encouraged them to reject their son’s way of life.

On a positive note, Mama in particular is not distant at all by the end. Elements of wry humour throughout the book mean you won’t always have tears in your eyes, but really this is as much a painful story as it is an empowering one.

This is an inspirational read, smart, thought provoking, and fascinating at how Amrou shifts his perspectives on Islam, to see how it incorporated all that he is and belonged to him, an integral part of him as he comes to own it. It was so thankful to see how he returned to his family roots, in particular his mother, and came to understand her better.

It is such an absorbing and emotional story which carries a heartening message that connections can be found in the most unexpected places. This is a memoir so worth reading, there is so much to learn from it, so much more than just being a gay muslim drag queen, ultimately it is about the complexities of what it is to be human. Highly recommended.

Amrou Al-Kadhi is the founder of drag troupe Denim and has several TV shows currently in development. Amrou has written an episode for Kumail Nanjiani & Emily V. Gordon’s upcoming series for Apple (US), Little America, as well as for BBC America’s hotly anticipated series, The Watch. Amrou has written and directed four short films and has features in development with Film4, the BFI and BBC films. Their journalism has appeared in the Guardian, the Independent, Gay Times, Attitude, CNN and Little White Lies, among other publications. Unicorn is Amrou’s first book.