Shop - THIS IDEA MUST DIE : Scientific Theories That Are Blocking Progress 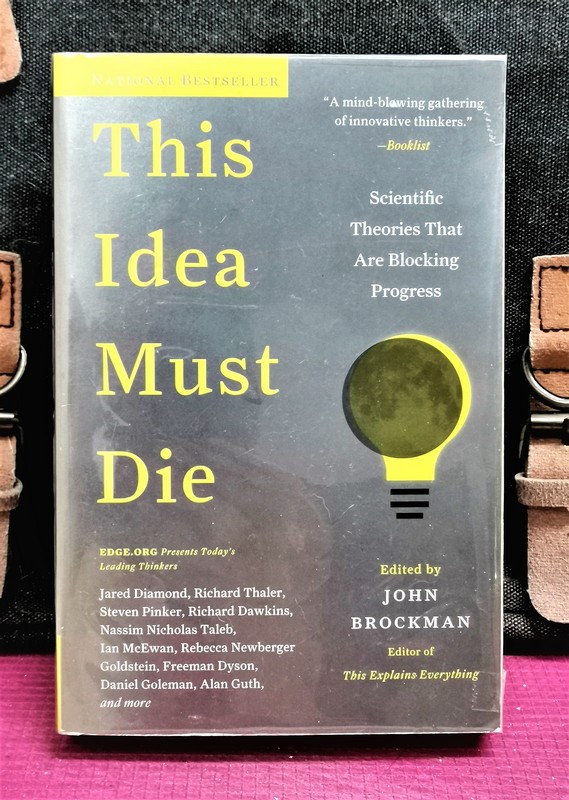 THIS IDEA MUST DIE : Scientific Theories That Are Blocking Progress

Essays Identify Old Ideas That May Be Stalling Scientific Progress

“Science advances by a series of funerals”

Sometimes, old ideas have to be put to bed before new ones can flourish. With that in mind, he asked researchers, journalists and other science enthusiasts to weigh in on which established theories need to go.

Hence, Brockman, founder of the Edge Foundation, has compiled a series of humorous and thought-provoking short essays from a wide array of scientists, science writers, and assorted academics. Reporting from the cutting edge of scientific discovery, today’s visionary thinkers target the greatest roadblocks to innovation.

The bestselling editor of This Explains Everything brings together 175 of the world’s most brilliant minds to tackle Edge.org’s 2014 question: What scientific idea has become a relic blocking human progress?

Few truly new ideas are developed without first abandoning old ones. In the past, discoveries often had to wait for the rise of the next generation to see questions in a new light and let go of old truisms. Today, in a world that is defined by a rapid rate of change, staying on the cutting edge has as much to do with shedding outdated notions as adopting new ones.

Each year, John Brockman, publisher of Edge.org—”>The world’s smartest website
” (The Guardian)—challenges some of the world’s greatest scientists, artists, and philosophers to answer a provocative question crucial to our time.

In 2014 he asked 175 brilliant minds to ponder: What scientific idea needs to be put aside in order to make room for new ideas to advance? The answers are as surprising as they are illuminating. In :
● Jared Diamond explores the diverse ways that new ideas emerge
● Nassim Nicholas Taleb takes down the standard deviation
● Steven Pinker dismantles the working theory of human behavior
● Richard Dawkins renounces essentialism
● Sherry Turkle reevaluates our expectations of artificial intelligence
● Geoffrey West challenges the concept of a “Theory of Everything”
● Andrei Linde suggests that our universe and its laws may not be as unique as we think
● Martin Rees explains why scientific understanding is a limitless goal
● Nina Jablonski argues to rid ourselves of the concept of race
● Alan Guth rethinks the origins of the universe
● Hans Ulrich Obrist warns against glorifying unlimited economic growth

Some ideas cited in the book are so annoying that we would be better off without them, even though they are true. Take “brain plasticity”. This was a real thing once upon a time, but the phrase spread promiscuously into so many corners of neuroscience that no one really knows what it means any more.

Other ideas, especially in the more anthropocentrically inclined sciences of economics and computer science, reflect more our natural bent for binary oppositions and good stories than they reveal real things about the world. This is where things get very interesting indeed, making Brockman’s latest book essential, as well as enjoyable, reading.

Many of the responses offer tweaks to theories to better fit new discoveries. A psychologist points out that sadness and other “negative” emotions are not inherently bad, that they can help sharpen analytical thinking and enhance memory (SN: 11/2/13, p. 18). Other essays call for more radical changes. Laboratory mice make lousy stand-ins for people when developing new drugs, argues an oncologist.

It’s time to stop using them as furry human surrogates, she says. And a number of physicists would be happy to toss out string theory for good. “What we’ve learned is that this is an empty idea,” one physicist writes. “It predicts nothing about anything.”

Some of the essays tackle broader subjects, suggesting ways scientists can improve how they design experiments, crunch numbers and publish papers. Other writers lament poor communication between scientists and the general public, especially when misconceptions allow old theories to linger in the media long after they’ve been debunked. Take, for example, the notion of nature versus nurture — it still crops up in politics and the press, even though biologists have long known that genetics and environment are inextricably intertwined.

A few of the arguments are bound to be controversial. For example, a journalist asserts that the information gleaned from massive particle accelerators isn’t worth their equally massive price tags. And while Brockman’s question inspired some thought-provoking responses, the short essays can provide only a brief overview of complex problems. Readers will want to do some research of their own before deciding which, if any, of these ideas really requires a funeral.

Profound, engaging, thoughtful, and groundbreaking, This Idea Must Die will change your perceptions and understanding of our world today . . . and tomorrow.

New science has a difficult time. As physicist Max Planck said long ago, a good idea does not automatically replace a bad one; “opponents eventually die and a new generation grows up that is familiar with it.”

In his latest compendium, Brockman (What Should We Be Worried About?: Real Scenarios that Keep Scientists Up at Night, 2014, etc.), publisher of the online science salon, Edge.com, asked 175 scientists, philosophers and intellectuals for ideas that have outlived their usefulness.

At one to four pages, these are thoughtful essays that answer the question when they’re not doing the opposite (defending the author’s life’s work) or wandering off to answer a different question. There are the usual suspects. Free will, Malthusianism, racism, IQ tests and religion do not do well.

Mostly, the contributors hate simple explanations. Scientists studying the brain insist that it’s not a computer, that the left-brain–right-brain dichotomy is silly, and that studying neurological activity won’t explain consciousness because it’s an illusion.

Some ideas were never true: Rationality is not a major feature of human behavior. Some debates (nature vs. nurture) are nonsense. Occasionally, the news is good. Altruism is not necessarily self-sacrifice. We benefit as individuals, and most of us experience pleasure when we help others.

Finally, novelist Ian McEwan disparages the book’s theme, pointing out that you never know when you’ll need an old idea. “It might rise again one day to enhance a perspective the present cannot imagine.” No one wants to retire Shakespeare. Other contributors include A.C. Grayling, Richard Dawkins, John McWhorter, Sherry Turkle and Jared Diamond.

Although they often beat dead or nonexistent horses, these ingenious cerebral tidbits will stimulate, provoke and confuse (in a good way) intelligent readers.

John Brockman is an American literary agent and author specializing in scientific literature. He established the Edge Foundation, an organization that brings together leading edge thinkers across a broad range of scientific and technical fields. He is author and editor of several books, including: The Third Culture (1995); The Greatest Inventions of the Past 2000 Years (2000); The Next Fifty Years (2002) and The New Humanists (2003). He has the distinction of being the only person to have been profiled on Page One of the “Science Times” (1997) and the “Arts & Leisure” (1966), both supplements of The New York Times.