Shop - The Year of Fear : Machine Gun Kelly and the Manhunt That Changed the Nation 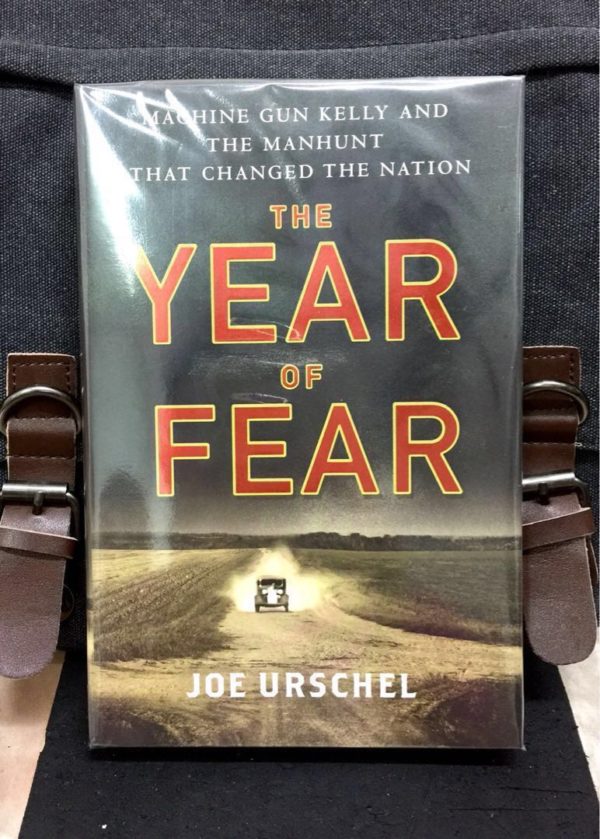 The Year of Fear : Machine Gun Kelly and the Manhunt That Changed the Nation

WHITNEY HOUSTON : The Voice, The Music, The Inspiration

How Much Is Enough? : Money and the Good Life
Joe Urschel
Brand-new, Hardcover

A True Story of Legendary Kidnapping That Lead To The Birth Of F.B.I

This New York Times & Washington Post bestseller in hardcover edition is a bran-new book and nicely wrapped with protective book-wrapper. The original new book is sold at usual price RM105.55. Now here Only at RM20.

It’s 1933, the year of fear, and Prohibition has given rise to the American gangster–now infamous names like Bonnie and Clyde and John Dillinger. Bank robberies at gunpoint are commonplace and kidnapping for ransom is the scourge of a lawless nation.

With local cops unauthorized to cross state lines in pursuit and no national police force, safety for kidnappers is just a short trip on back roads they know well from their bootlegging days.

Gangster George “Machine Gun” Kelly and his wife, Kathryn, are some of the most celebrated criminals of the Great Depression.

With gin-running operations facing extinction and bank vaults with dwindling stores of cash, Kelly sets his sights on the easy-money racket of kidnapping. His target: rich oilman, Charles Urschel.

Enter J. Edgar Hoover, a desperate Justice Department bureaucrat who badly needs a successful prosecution to impress the new administration and save his job. Hoover’s agents are given the sole authority to chase kidnappers across state lines and when Kelly bungles the snatch job, Hoover senses his big opportunity.

What follows is a thrilling 20,000 mile chase over the back roads of Depression-era America, crossing 16 state lines, and generating headlines across America along the way–a historical mystery/thriller for the ages.

Joe Urschel’s The Year of Fear is a thrilling true crime story of gangsters and lawmen and how an obscure federal bureaucrat used this now legendary kidnapping case to launch the FBI.

When George ” Machine Gun” Kelly and his gang captured oil magnate Charles Urschel , they not only ignited a madcap manhunt but also altered the course of American law enforcement history.

The author effectively traces how Charles Urschel’s wife’s immediate call to a newly established federal hotline led to young J. Edgar Hoover’s most successful investigation, and the birth of the FBI.

Urschel makes clear how much of that success in the search for Kelly and his cohorts was due to the victim’s incredible sangfroid while a captive and his remarkable memory for details, including the distances between buildings on the farm where he was held.

Federal law enforcement and what would be known as the FBI under J. Edgar Hoover was largely toothless at the time. Agents didn’t even carry weapons and Hoover’s job was in peril. That all changed with a spate of kidnappings on the heels of the famous Lindbergh Kidnapping. Members of wealthy families were often abducted and held for ransom, as was Urschel mentioned above.

With a public outcry for intervention and the sanction of FDR, the feds were given greater muscle and latitude in pursuing the criminals.

In describing the exciting chase and eventually capture of Kelly in prose that reads like a novel, the author shows how it elevated Hoover to national prominence and how he was be the unassailable agency dictator for the ensuing decades.

The effects would also spill over into the movie industry, where Hoover would use the levers of power to alter how criminals and law enforcement would be portrayed. Police (and particularly the FBI) would be shown in a much more favorable light and crooks would lose some of their anti-hero luster.

Kelly was eventually apprehended and the trial was stacked against him and his accomplices, leading to the certain guilty verdicts, regardless of their role in the kidnapping.

His confinement leads the reader down another entertaining trail of the narrative. Alcatraz had recently opened and Kelly and some other high profile prisoners were transported via a lengthy and unpleasant train ride to their destination.

Once he settled in at the new maximum security prison, Kelly would join the notorious Al Capone in establishing the Alcatraz Prison band featuring Capone on banjo and Kelly on drums.

The book has a number of such delightful anecdotes, is fast-paced and never loses the momentum, and is deft at exploring the many implications of this watershed crime story in American criminal annals.

KIRKUS REVIEW：
The colorful story of George “Machine Gun” Kelly (1895-1954), a Depression-era kidnapping, and the rise of J. Edgar Hoover and his G-men.

In 1933, the year after the famous Lindbergh baby kidnapping, oilman Charles Urschel (no relation to the author) was abducted from his Oklahoma home and held for nine days. After Urschel’s release in exchange for a $200,000 ransom, the kidnapping turned into “a national melodrama that…played out over the nation’s radio networks and on the pages of its newspapers.”

The notorious Kelly and his gangster-moll wife, Kathryn, were pursued in a frantic manhunt coordinated by the ambitious Hoover, who, at 36, had just become head of the U.S. Department of Justice’s new Bureau of Investigation.

In this action-packed debut, author Urschel, the former managing editor of USA Today who now directs the National Law Enforcement Museum in Washington, D.C., offers a vivid re-creation of the massive, multistate manhunt that led to the capture and imprisonment of America’s “new Public Enemy Number One.”

Sometimes overly detailed and containing liberal quotations from contemporary newspaper accounts, with prose matching its tough-guy, B-movie aura (“She snapped the waistband closed with a definite click, like the sound of a .38 slug sliding into its chamber”), the book captures the rampant criminality of the 1930s and the public’s yearning for a return to law and order.

The author packs the pages with shootouts, bank robbers, and corrupt cops. With the passage of the Lindbergh law, making it a federal felony to take a kidnapping victim across state lines, the self-promoting Hoover was poised to stop Kelly and show that his agents had the makings of a federal police force. His bureau became the FBI in 1935.

An entertaining slice of the fabled (and familiar) gangster epoch.

About the Author
JOE URSCHEL is the former Executive Director of the National Law Enforcement Museum in Washington, DC. Urschel is also a former managing editor of USA TODAY, where he served as a senior correspondent and columnist and has worked for the Detroit Free Press as a reporter, critic, and editor. His journalism honors include awards from the National Association of Newspaper Columnists, the National Association of Sunday and Feature Editors, and an Emmy. He lives in Virginia.

Be the first to review “The Year of Fear : Machine Gun Kelly and the Manhunt That Changed the Nation” Cancel reply