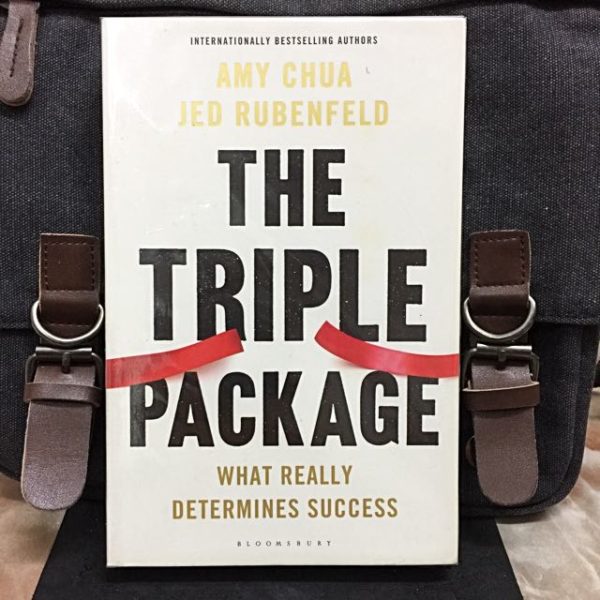 uncovering The Path to Success

This internationally bestselling paperback is a bran-new book and nicely wrapped with protective book-wrapper. The original new book is sold at usual price RM68.50. Now here Only at RM15.

Why do Jews win so many Nobel Prizes and Pulitzer Prizes?

Why are Mormons running the business and finance sectors?

Why do the children of even impoverished and poorly educated Chinese immigrants excel so remarkably at school?

It may be taboo to say it, but some cultural groups starkly outperform others.

The bestselling husband and wife team Amy Chua, author of Battle Hymn of the Tiger Mother, and Jed Rubenfeld, author of The Interpretation of Murder, reveal the three essential components of success – its hidden spurs, inner dynamics and its potentially damaging costs – showing how, ultimately, when properly understood and harnessed, the Triple Package can put anyone on their chosen path to success.

“The discipline will always be found most valuable,” Samuel Smiles wrote in Self-Help, “which is acquired by resisting small present gratifications to secure a prospective greater and higher one.” This is just one of many points on which the Victorian moralist and his spiritual successor, Amy Chua, are in perfect agreement.

“The present moment by itself is too small, too hollow,” Chua concludes in her latest self-help briefing, The Triple Package: What Really Determines Success, co-written with her husband and fellow Yale professor Jed Rubenfeld. “We all need a future, something beyond and greater than our own present gratification, at which to aim or to which we feel we’ve contributed.” Maybe the popularity of the acronym Yolo really does mean there are millions of people for whom this insight will constitute, as Chua believes, a kind of epiphany.

For stoics who have trudged doggedly towards the final pages of The Triple Package, an ability to defer pleasure may well be what kept them going. But if Chua’s homiletic provides a humdrum conclusion to a book that has been promoted as wildly controversial and surprising, well, as Smiles modestly admitted in 1859, the secret of worldly success is not, in fact, all that obscure, “as the proverbs of every nation abundantly testify”.

Not to worry, Chua and Rubenfeld soothe inferior types, lots of things about the triple package aren’t nice to be around: “If insecurity is a spur to Jewish success, it comes at a high price.” Perhaps a greater deterrent for individuals thinking of taking the triple package route to success, for that is the ostensible point of this exercise, is a self-help programme that self-combusts as soon as it starts to work. There’s a design flaw, even for people with the right blood type. What happens to the status-conscious Iranians or “famously entrepreneurial” Lebanese once success allows these titans to conquer the insecurity that forms, the authors insist, a crucial element of the triple package? Then again, Amy Chua has done all right without it.

About the Author
Amy Chua is the John M. Duff Professor of Law at Yale Law School. She is the author of three books. Her first book, World on Fire, a New York Times bestseller, was selected by the Economist as one of the best books of 2003. She is also the author of the international sensation, Battle Hymn of the Tiger Mother. In 2011 Amy was listed as one of Time magazine’s 100 most influential people in the world.

Jed Rubenfeld is the Robert R. Slaughter Professor of Law at Yale Law School. He is also the author of the bestselling Richard and Judy Best Read The Interpretation of Murder and The Death of Instinct.

Be the first to review “The Triple Package : What Really Determines Success” Cancel reply