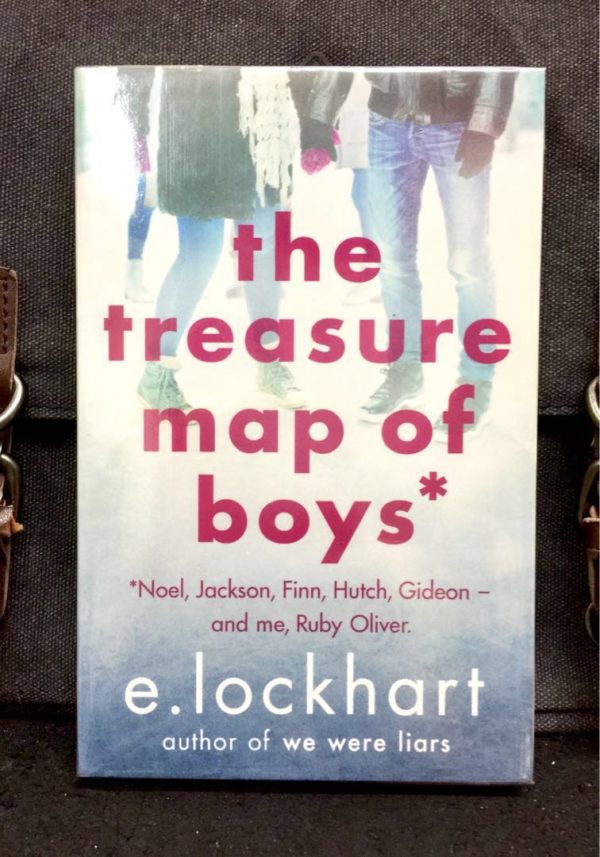 From E. Lockhart, author of the highly acclaimed, New York Times bestseller We Were Liars, which John Green called “utterly unforgettable,” comes The Treasure Map of Boys, the third book in the uproarious and heartwarming Ruby Oliver novels.

E. Lockhart offers a hilarious and realistic look at the trials and tribulations of being a teenager in her third Ruby Oliver novel. Find out what the real treasure is in Ruby’s life as she creates a treasure map of people she cares for and who return her feelings.

Ruby is back at Tate Prep, and it’s her thirty-seventh week in the state of Noboyfriend.

Her panic attacks are bad, her love life is even worse, and what’s more:

● Noel is writing her notes, Jackson is giving her frogs,

● Gideon is helping her cook, and Finn is making her brownies.

● Rumors are flying, and Ruby’s already-sucky reputation is heading downhill.

Not only that, she’s also: running a bake sale, learning the secrets of heavymetal therapy, encountering some seriously smelly feet, defending the rights of pygmy goats, and bodyguarding Noel from unwanted advances.

In this companion novel to The Boyfriend List and The Boy Book, Ruby struggles to secure some sort of mental health, to understand what constitutes a real friendship, and to find true love—if such a thing exists.

“The Treasure Map of Boys” is the third book about Ruby Oliver, a 16-year old girl unsure of what and who she wants in her life.

The Treasure Map of Boys continues the saga of Ruby Oliver and her journey in the state of “noboyfriend.” In the previous books The Boyfriend List and The Boy Book, Ruby has just started therapy because of her panic attacks and is learning to live life with just a few friends after losing all of her friends sophomore year.

In The Treasure Map of Boys, Ruby finds herself falling for Noel, but knows she shouldn’t because one of her only friends Nora likes him.

She struggles with old feelings for her ex boyfriend Jackson and becomes even more confused when boys like Finn and Gideon begin to flirt with her.

In summary, Ruby is completely confused and feels like her life is being ruled by these different boys.

Ruby’s life is messy and stressful and she always seems to be trying to figure out how to deal with her overbearing parents, ex-boyfriend, potential boyfriends, her on and off friends, and undeserved reputation of a roly-poly slut.

Her knowledge of the inner works of a teenage girl’s mind is profound and portrayal of Ruby is extremely realistic, albeit often painfully so.

In The Treasure Map Of Boys, Ruby’s aim is to be a good friend, control her panic attacks , and find true love, if such a thing exists.

Smart, funny, neurotic Ruby Oliver (from The Boy Book and The Boyfriend List ) is back, still struggling with confusing boys, former friends who now shun her and, of course, panic attacks.

When her shrink asks her to create a treasure map showing “positive relationships with [her] peer group,” Ruby again focuses on the boys in her life—like Jackson, her first boyfriend, who cheated on her with her former best friend but now may want her back.

In the process, she overlooks some of the true gems surrounding her. Fans will continue to root for the authentic if self-centered narrator as she relates both the hilarious and painful moments of her life (which sometimes coincide, such as when her mother comments on her breasts and her back pimples while they are in a Nordstrom changing room).

Readers may get occasionally annoyed by Ruby’s emotional upheavals, but they will appreciate her honest insights about the good and bad in everyone—including “hyperverbal and reasonably good looking” people like her who “get confused about what and whom they want”—and about the possibility of loving them anyway.

About the Author
E. Lockhart is the author of the highly acclaimed New York Times bestseller We Were Liars and the Ruby Oliver quartet (The Boyfriend List, The Boy Book, The Treasure Map of Boys, and Real Live Boyfriends), as well as Fly on the Wall, Dramarama, and How to Be Bad (the last with Sarah Mlynowski and Lauren Myracle). Her novel The Disreputable History of Frankie Landau-Banks was a Michael L. Printz Award Honor Book, a finalist for the National Book Award, and winner of a Cybils Award for Best Young Adult Novel. She lives in Brooklyn, New York.

Be the first to review “THE TREASURE MAP OF BOYS : Noel, Jackson, Finn, Hutch, Gideon – And Me , Ruby Oliver” Cancel reply