Shop - The Stuff: Unlock Your Power to Overcome Challenges, Soar, and Succeed 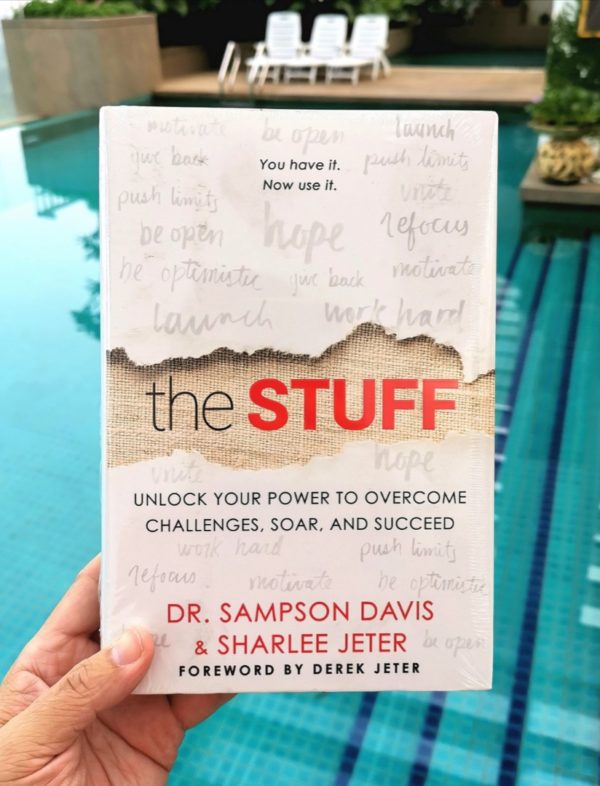 The Stuff: Unlock Your Power to Overcome Challenges, Soar, and Succeed

How to Kill a Unicorn : How the World’s Hottest Innovation Factory Builds Bold Ideas That Make It to

This International / New York Times Bestseller in Hardcover edition is a bran-new book and still wrapped with new book plastic seal. The original new book is sold at usual price RM119.07. Now here Only at RM28.

When people face tragedy and challenges in life, what helps them to persevere?

Co-authors Dr. Sampson Davis and Sharlee Jeter attempt to answer that question in their new book: “The Stuff: Unlock Your Power to Overcome Challenges, Soar, and Succeed.

Everyone has difficult moments in life. But everyone also has the Stuff to overcome hardships, to survive and thrive.

Learn how to better access and hone the eleven core elements of the Stuff and be inspired by the real-world stories of triumph in this practical book by New York Times bestselling author Dr. Sampson Davis ( The Pact, Living and Dying in Brick City) and Sharlee Jeter (Turn 2 Foundation).

Everyone has those moments in life when they’re truly tested, when they wonder if they have the strength to overcome the challenges before them.

We’ve all heard stories of people who have risen up in the face of the unimaginable. But not everyone believes that they have what it takes to do the same.

However, what we need to realize our own potential—to fight for what we want our lives to be—already resides within each of us. You already have the Stuff. Learning how to develop and harness it is the key.

Survivors themselves, Dr. Sampson Davis and Sharlee Jeter have created The Stuff Movement, interviewing dozens of people to find the common threads that enabled them to triumph over their challenges.

Through the powerful stories of people who overcame cancer, poverty, toxic relationships, racism, violence, career roadblocks, and other obstacles big and small— The Stuff highlights eleven core elements that will help you not only survive but thrive in spite of life’s difficulties.

“A lot of people don’t realize that they have it. Like I didn’t. When we first did this project, he was telling me that I had this inner fortitude when he knew my story going through cancer in college. So it’s really – we would really like to tell people that don’t know about it that they do have it in them,” Jeter said.

One of the book’s pieces of advice to help in unlocking “the stuff” is to write a motivational statement.

“Whatever your mantra is, if you don’t have one, you can use one. I use the three Ds – dedication, determination, and discipline.

These are ironclad and they are applicable to any situation you’re going through. So borrow someone’s if you don’t have one, or come up with your own.

Put it on post-its, put it on your mirror – your bathroom mirror, your desk, doors, wherever you want to put it in the house that gets you going,” Davis said.

These elements are as easy to understand as they are to enact—presented in plain talk, without judgment, and with compassion for the everyday challenges people face.

As Dr. Davis and Sharlee share stories of the amazing people who’ve shown their Stuff, you’ll find that unearthing the same Stuff within yourself is a process as rewarding as it is important—and you’ll never say you can’t do it again.

Read the book, and join the conversation at TheStuffMovement.com.

In short, “The Stuff” is essentially a collection and discussion of heartwarming and moving real-life stories in which the common theme is overcoming obstacles.

Dr Sampson and Ms Jeter use simple, familiar, and encouraging language to nudge their readers towards “launching” their own successes and overcoming obstacles of their own.

All these keywords incorporate the empowering needed stories of The Stuff, vital humans, hearts at battle with themselves with all the terrible things thrown their ways, obstacles overcome, trauma endured and moving forward with greatness, the stuff, the greatness of souls, the stuff of real super heroes, giving back and paying forward all clearly layered out in essential human truth work.

One story of courage and greatness was of Sean Swarner, he had beaten cancer twice and along with his brother he established a non-profit organisation called The Cancer Climber Association.

On May 16 2002, with just one lung and odds stacked against him, he climbed with his brother successfully to summit of Mount Everest with a tribute flag inscribed with the names of cancer sufferers.

In the Foreward Derek Jeter says :
“The individuals profiled in this book are incredible, and how they overcame seemingly insurmountable obstacles, stayed so hopeful, kept charge of their lives, and remained resilient in the face of trauma and tragedy can provide all of us with tremendous insight.

Stories of triumph energize us to become better people.”

I do agree with this. these are memorable stories, memorable characters , ones of which the reader shall have engraved upon their hearts and minds.

Word of caution these narratives may evoke a reality check upon ones ruminations on life and humanity.

Sharlee Jeter is the president of the Turn 2 Foundation, which was established by her brother, baseball legend Derek Jeter. The Foundation has successfully channeled fundraising power into results as demonstrated by its signature initiative, Jeter’s Leaders, a leadership development program for high school students. Sharlee also oversees the children’s division of Jeter Publishing, which has published New York Times bestsellers The Contract and its follow up, Hit & Miss. Born and raised in Kalamazoo, Michigan, Sharlee currently resides in Brooklyn, New York, with her son Jalen.

Dr. Sampson Davis is an emergency room physician, public speaker, philanthropist, and New York Times bestselling author. In 2000, he helped found The Three Doctors Foundation, which offers a series of free public programs focused on health, education, leadership, and mentoring. Dr. Davis was honored in 2000 with the Essence Lifetime Achievement Award as well as named one of their forty most inspirational African Americans in the country. He is the youngest physician to receive the National Medical Association highest honor and was honored on national television with the 2009 BET Awards. Dr. Davis has coauthored New York Times bestselling books, The Pact, We Beat the Street, The Bond, and Living and Dying in Brick City: An ER Doctor Returns Home.

Marcus Brotherton is a New York Timesbestselling author and collaborative writer known for his books with high-profile public figures, humanitarians, inspirational leaders, and military personnel. He has authored or coauthored more than twenty-five books and substantively edited more than thirty-five others. Marcus’s books include the widely acclaimed Shifty’s War, We Who Are Alive & Remain, A Company of Heroes, and Feast for Thieves.

Be the first to review “The Stuff: Unlock Your Power to Overcome Challenges, Soar, and Succeed” Cancel reply

Foreword : Derek Jeter
● Chapter 1 : The Question Everybody Asks
● Chapter 2 : Choose to Hope
● Chapter 3 : Forge Your Motivation Statement
● Chapter 4 : You Must Launch
● Chapter 5: Develop Your Team
● Chapter 6 : Push Your Limits
● Chapter 7 : Refuse to Give In to Fear
● Chapter 8 : Focus Your Rage
● Chapter 9 : Lean Into Hard Work
●.Chapter 10 :.Stay Open to Unforeseen Inspiration
● Chapter 11 : Flip Negatives to Positives
● Chapter 12 : Be a Giver
● Postscript: You’ve Already Got What It Takes
Acknowledgments
Notes