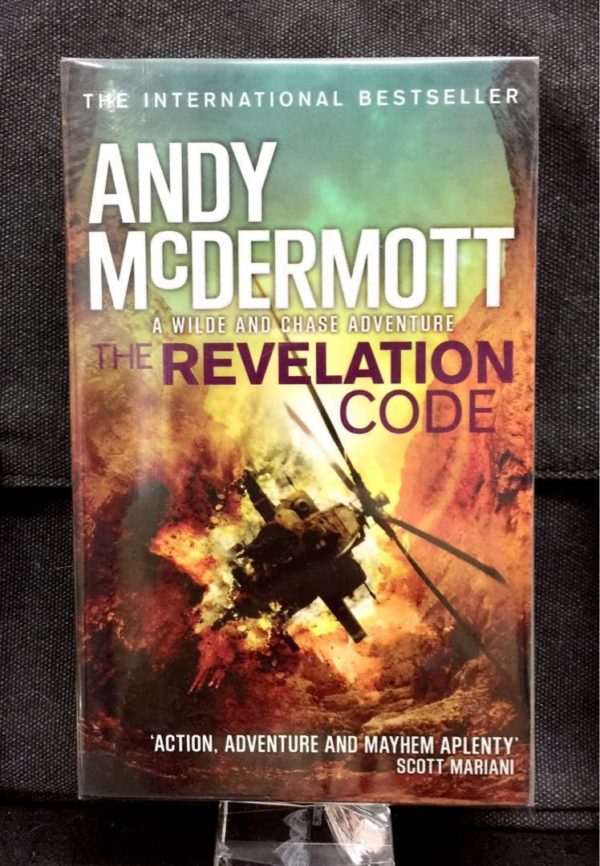 This International Bestselling Fiction in paperback edition is a bran-new book and nicely wrapped with protective book-wrapper. The original new book is sold at usual price RM35.91. Now here Only at RM12.

The Bible’s last book hides a secret that could end the world.

2002 – Southern Iraq
A CIA covert operation in the desert uncovers ancient ruins concealing a humanoid statue, with six wings and the face of a lion.

Team member Ezekiel Cross is convinced that it represents one of four angels prophesied in the Book of Revelation, and when the agents are attacked by Iraqi forces, leaving Cross the only survivor, he steals it to begin his own mission from God …

Present Day – New York
Depressed following the death of a friend, Nina Wilde has been focusing her energies on her pregnancy, rather than the archaeological discoveries for which she is renowned. But adventure still finds her – when she’s kidnapped by religious cultists intending to force her to locate the remaining angels!

Held prisoner in a strange village, Nina engages in a battle of wits against her captors, knowing her only hope of rescue is for her husband Eddie Chase to find the other statues first. But with a ruthless maniac determined to fulfil Revelation’s prophecy, time is running out. Only by keeping the angels out of the cultists’ hands can Nina and Eddie prevent the coming apocalypse … but what price will they have to pay?

In the heart of Iraq, on the eve of Operation Iraqi Freedom, a CIA special forces unit met with Arab rebels near long-hidden ancient ruins, a place from which the Americans were direly warned to stay away. But team member Ezekiel Cross didn’t listen and made an astounding discovery—one worth killing for.

Now Cross is a ruthless cult leader on an ominous mission. Convinced that he’s unlocked the secrets of the Bible’s Book of Revelation, he’s determined to gather four stone angels that will trigger God’s promised End of Days. And he’s not alone.

A former U.S. president, with a vision of all-out religious warfare, plays a role in the dark plot. But while Cross may have the clues to tracking down the remaining angels, he hasn’t been able to match them to real-world locations. For that he has coerced famed archaeologist Nina Wilde into assisting him, using her husband, ex–special forces soldier Eddie Chase, as collateral.

With Eddie held hostage, Nina is forced to recover relics of untold power from Rome to Israel. She must find a way to halt Cross’s mad quest, because the last piece of the puzzle is at hand—and with it comes the most terrifying revelation of all.

A cult leader is determined to bring about a biblical apocalypse, and when archaeologist Nina Wilde is kidnapped to further his plans, it’s up to her husband Eddie Chase to throw a spanner in the works.

Archaeologist Nina Wilde and her husband, ex-SAS soldier Eddie Chase, are back in another of their hair-raising adventures, mixing fact and fiction into an explosive blend of action and entertainment.

The only difference is that Nina is pregnant, and has her baby to think of as she gets dragged wholly against her will into yet more archaeological scrapes, this time pitted against a fundamentalist cult with a dastardly plan to wreak havoc. After all, no Boys’ or Girls’ Own Adventure would be complete without a dastardly plan of some sort!

I must admit that it took me a little while to warm to Nina Wilde in this long-running series, whereas I clicked almost instantly with Yorkshireman-and-proud-of-it Eddie. He’s tough, inventive, irreverent and says ‘ay up’ a lot. Nina was a slower burn for me, and I found it harder to get a handle on her.

But I’m a convert now. She’s had her fair share of problems, losing a lot of friends to violent deaths in her high-profile career, leaving her seeing a therapist in an attempt to get her head back together after the death of one in particular. Nina’s sharp, intelligent and very loyal, but now, with a baby on board, she’s hoping for a calmer life.

Naturally that hope goes spectacularly wrong when she’s kidnapped by a crazy cultist who wants her to lead him to three of the four angels prophesised in the Book of Revelation.

And he doesn’t just want the statues to parade at a Sunday school gathering. He has something a little more apocalyptic in mind, naturally. With Nina’s whereabouts unknown, Eddie has to use all his considerable ingenuity to track down her captors.

Andy McDermott writes a bloody good adventure yarn. His characters positively jump off the page, but they’re always real people, even the villains with the moustache-twirling tendencies.

The book is littered with biblical clues and references and even the most outlandish parts of the stories never manage to destroy my ability to suspend disbelief. But I wouldn’t advise anyone to play a drinking game where you take a shot every time a helicopter gets destroyed or you’ll be out for the count pretty fast.

You can guarantee the arrival of an Apache gunship spells trouble, and not just for the people on the receiving end of its missiles.

The Revelation Code is fast, furious and always cinematic in its many chase scenes (no pun intended!).

About the Author
Andy McDermott is a former journalist and movie critic who now writes novels full-time following the international success of his debut thriller, The Hunt for Atlantis, which has been sold around the world in more than twenty languages. He is also the author of The Tomb of Hercules, The Secret of Excalibur, The Covenant of Genesis, The Pyramid of Doom, The Sacred Vault, Empire of Gold, Return to Atlantis, The Shadow Protocol, The Valhalla Prophecy, Kingdom of Darkness, and The Revelation Code. He lives in Bournemouth, England, with his wife and son.

Be the first to review “The Revelation Code” Cancel reply