Shop - The Rest Of Us Just Live Here 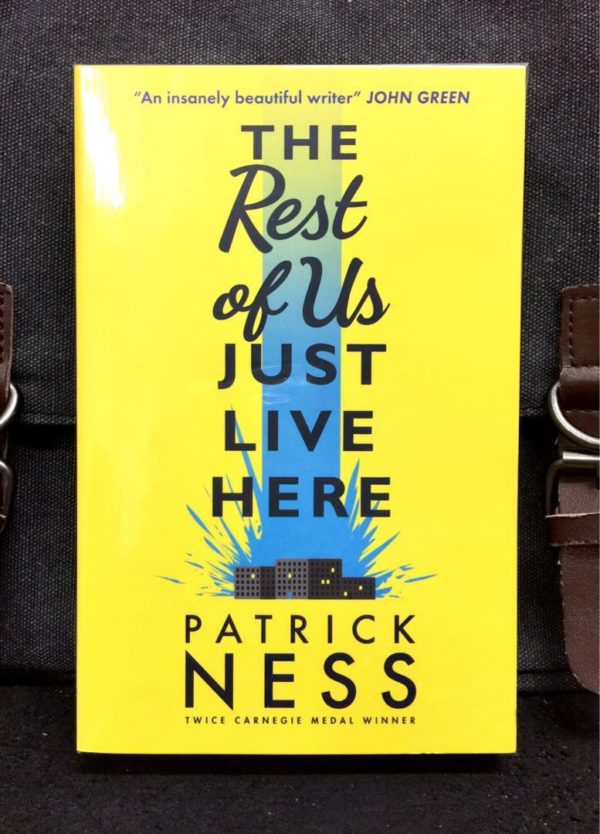 The Rest Of Us Just Live Here

This twice Carnegie Medal Winner Author novel in paperback edition is a bran-new book and still wrapped with new-book plastic wrapper. The original new book is sold at usual price RM39.90. Now here Only at RM12

What if you aren’t the Chosen One?

The one who’s supposed to fight the zombies, or the soul-eating ghosts, or whatever the heck this new thing is, with the blue lights and the death?

What if you’re like Mikey? Who just wants to graduate and go to prom and maybe finally work up the courage to ask Henna out before someone goes and blows up the high school. Again.

Because sometimes there are problems bigger than this week’s end of the world, and sometimes you just have to find the extraordinary in your ordinary life.

Even if your best friend is worshipped by mountain lions…

This is a novel about a group of friends who wants to have a normal life. They just want to graduate before the school blows up. Mysterious and paranormal things get in their way, but they did all they could to succeed.

What was most striking to readers were the fact that Ness managed to incorporate a lot of serious issues in this novel.

It was supposed to be a fun novel, but it was both fun and eye opening. He tackled multiple issues like depression, anxiety, and more. The novel was a mixture of laughter and sadness. Near the end was the part of sadness creeping in.

The plot was light and straightforward. The premise didn’t wander off from its promise, so it’s not disappointing in that aspect. The plot was too simple though. Ness could’ve added more interesting elements.

As a conclusion, I think the book’s main goal is to impart the insight of living your life to the fullest, in a cliche-or-not way. Which you shouldn’t forget that even you aren’t a hero that will save the world, you are the hero of your life. You are extraordinary and most importantly, you are loved. By many.

“Not everyone has to be the Chosen One. Not everyone has to be the guy who saves the world. Most people just have to live their lives the best they can, doing things that are great for them, having great friends, trying to make their lives better, loving people properly. All the while knowing that the world makes no sense but trying to find a way to be happy anyway.”

When you are reading a run-of-the-mill fantasy novel with protagonists that are a “Chosen One” (You know the ones, Harry Potter, Percy Jackson, Divergent, and billions others out there), have you ever wondered, “Hmm, what would the normal people of this world be doing at this moment?”

This brilliant novel by Patrick Ness can definitely offer an answer to that question. Even though in all of the chapters’ beginnings there’s always a snippet of the story involving the Chosen One(s), the main story follows the people who only want to graduate before somebody blows up the high school (again).

This book mainly follows the story of four individuals, first there’s Mikey, just your average 18-year-old high school senior who just wants to graduate properly and maybe ask his friend Henna (who’s also one of the four main characters) out before he graduates.

Mikey lives in a small city in America, the story of this book begins just a few weeks before Prom, where Mikey is struggling to express his feelings to Henna, Mikey also suffers an anxiety disorder, but that’s not the end of Mikey’s problems, his mother is currently running for a position in the government against Jared’s father, who Mikey actually admires.

Meanwhile his and Mel’s own father is an alcohol addict who rarely goes to work. And, as if things are not complicated enough already, Mel herself suffers from Anorexia (A disease that causes someone to have excessive fear of gaining weight), and she almost died a few years prior because of it (also, because of it, she’s now in the same class as Mikey, she should’ve graduated a year early.)
Mikey, despite of his anxiety disorder, has a very sarcastic sense of humor, he acts protectively for his family.

His relationship with his mother is a little… complicated, she always wants a higher position in the government, but deep inside, Mikey wishes that she would just settle down for a bit.

Mikey also often feels like the odd one out in his group of friends, and Ness’ execution in expressing these things was really eloquent and just… good, it definitely made Mikey a more relatable character.

Meanwhile Jared and Mikey are planning to move to the same city after high school, because they’re both accepted in two different universities that are very close to each other.

Mikey himself is actually very worried that both of them will just drift off after graduation, inner struggles like these are one of the things that really made me appreciate the book, Ness definitely knows what he’s doing in that aspect.

In the beginning of every chapters, there’s a little summary of what the Chosen Ones (They’re called “Indie Kids” in this book) has done in order to repel the alien invasion happening in the background.

Even without being the book’s main focus, you can tell Ness actually put an effort in this, sure, it’s probably the most cliched story I’ve ever read, but that’s sort of the point, and even so, it’s still quite interesting to read.

Because these little snippets give the readers a quick glance of the epic disaster that’s happening in the background of the story, I also think that it’s a clever way to remind ourselves of , well, ourselves, or our own life, we live in our own different stories, with background of world-scale events that can be either a disaster or a miracle, that (like it or not) we can’t really affect, and sometimes that’s okay.

These characters live in the fringe of dangerous and exciting things but they all got their own personal problems that, to them, are more important than just, “Shit, the world is ending tomorrow.”, I feel like this is probably the main attraction of the book, by using characters to view a certain (cliche) event from a different point of view, Patrick Ness has managed to create something truly unique in the genre, in the midst of all the “Chosen One” YA novels, this really came as a fresh addition to the genre and definitely sets the novel apart from other YA fantasy books.

And speaking of genres, it really isn’t fair to just call this novel a “fantasy” novel, it really challenges the conventional boundary of genres, and to be honest, I think this book really has it all, from science fiction, to romance, to thriller, to fantasy, this book has got a little of each.

As I’ve previously stated, Ness made the end-of-the-world drama the background of some very human stories, and because of the snippets in the epigraph, the readers are the only ones who knows the full story, none of the characters do, which makes the crossover between the main characters and the “Chosen Ones” really interesting to read.

Also, all the characters in this novel felt… complex, nobody felt like they only exists just to advance the plot forward, which is a problem I normally see in YA books. Even the characters that seemed unimportant, like some random tattoo artists that only graced a couple of pages, have their own complex thoughts and opinions of things, and I really appreciate that, made the book felt more real.

Meanwhile, on the prose itself, it was fine, I guess, the kind of language used I think is perfect for the targeted audience, not too flowery but definitely not too simplistic. And the dialogues flows really well too, all the conversations sound natural and plausible.

In the end, The Rest of Us Just Live Here is a book about the worry, hope and anxiety that come with the end of teenage years and the arrival of adulthood, and all the doubt that comes with it.

In writing this book, Patrick Ness has created something unique, a book that felt “real” in a weird way, yes, there’s a mountain lion god, yes, there are zombie cops and mysterious blue light from space, but that’s not the point of this book.

This book was really different that anything else I’ve ever read, and that’s not a bad thing at all.

About the Author
Patrick Ness is best known for his books for young adults, including the Chaos Walking trilogy and More Than This. Twice in a row — for Monsters of Men and A Monster Calls — he won the Carnegie Medal, the oldest and most prestigious book award for children’s writing in the UK. A Monster Calls was also the first book ever to simultaneously win the Carnegie Medal and the Kate Greenaway Medal for illustration. Ness has taught creative writing at Oxford University and is a literary critic for the Guardian. Born in Virginia, he lives in London.