Shop - The Mosaic Principle : the Six Dimensions Of A Remarkable Life And Career 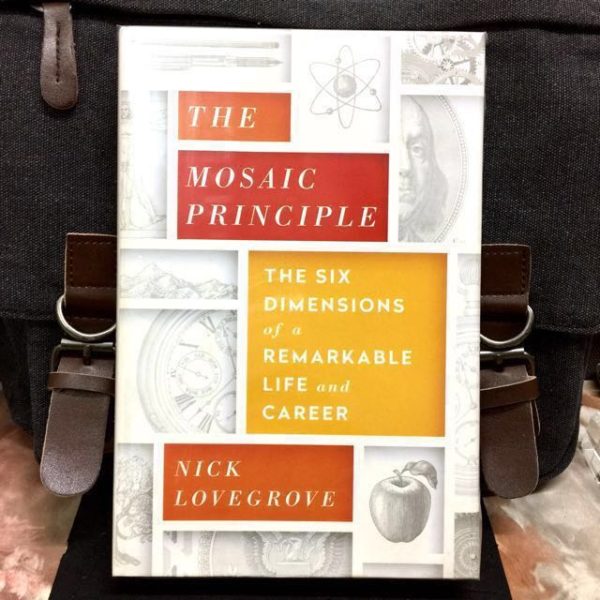 The Mosaic Principle : the Six Dimensions Of A Remarkable Life And Career

The Secrets of Word-of-Mouth Marketing: How to Trigger Exponential Sales Through Runaway Word of Mou

Messy : How To Be Creative And Resilient In A Tidy-Minded World
Nick Lovegrove
BRAND NEW, HARDCOVER

This Financial Times and International bestseller in hardcover edition is a bran-new book and nicely wrapped with protective book-wrapper. The original new book is sold at usual price RM138.81 (Hardcover). Now here Only at RM32

This inspiring book takes the broad view of professional success and personal fulfilment: a new inspirational model for a successful, diversified life.

Life – personally and professionally – is lived to the fullest as a mosaic, encompassing a rich and complex set of diverse experiences that provide purpose, meaning, happiness, and success.

Yet, the pressures of modern society push us toward narrower focus and deeper specialization in our lives and careers.

Our pursuit of specific expertise risks us becoming isolated from those different from us; our lack of shared experience fosters suspicion and conflict.

The world is an increasingly interconnected place; in work as in life, we need a broad range of experiences to widen our knowledge, perform our best and feel most fulfilled.

But in education and business there is the growing feeling that we are being led down a rabbit hole of narrow expertise, forced to specialise or shuttled into niche positions that don’t make use of our wider talents.

● businesspeople and government officials who persistently distrust and demonize each other;

● a fortunate swath of society with professional and financial security, increasingly isolated from those left behind;

● and community leaders who struggle to relate to and connect with the communities they serve.

In every walk of life we have allowed ourselves to be pushed into self-defining cocoons from which it is difficult to break out.

Nick Lovegrove’s compelling vision provides the way out of this contemporary trap.

He supplies vivid portraits of those who get it right (such as Paul Farmer, the physician whose broad and imaginative choices bring health and hope to the world’s poorest people) and those who get it deeply wrong (such as Jeffrey Skilling, the former CEO of Enron) and connects their experiences with a blueprint of six skills – a moral compass, transferrable skills, contextual intelligence, prepared mind, intellectual thread, and extended network.

The Mosaic Principle will help you to succeed in an ever-changing, more complex, and diverse world, and build a more remarkable and fulfilling life.

In The Mosaic Principle, Nick Lovegrove encourages us to take the broad view, showing how we can develop the mosaic of skills we need to make the most of ourselves and our careers, to the benefit of all.

Drawing on more than three decades of personal experience across sectors, and examining the inspiring stories of extraordinary people, historical and contemporary, Lovegrove sets out the six dimensions of the successful generalist, skills that provide the ways and means for taking unorthodox steps to encourage us to live broader, better lives.

Ditch the corporate ladder and approach your career as Odysseus might, with brilliance, guile and versatility. This is the plea from author Nick Lovegrove in The Mosaic Principle: The Six Dimensions of a Successful Life & Career. In this part-philosophical, part-practical career guide, Lovegrove rails against businesses’ demands for greater specialisms, which tend to bind people into working lives of narrow experience.

Not only does this leave us unfulfilled, he says, but companies lack sufficient staff with the perspective to solve complex problems.

“The world is increasingly obsessed with the power of narrow, specialist expertise,” argues Lovegrove, “but if we always shape our lives that way then we all too easily become one-trick ponies.”

He says such individuals not only lose something of what makes them special but they also lack the transferable skills to succeed in a complex and diverse world.

Lovegrove’s remedy is for people to allow themselves the freedom to explore their intellectual interests throughout a wide-ranging career.

As working lives lengthen, so does the opportunity to meander across sectors and industries, leading to a deeper knowledge. This mosaic of skills and experience can then be pieced together: in this way, an interest in environmental law could take someone from private practice representing companies dealing with government regulation, to a government department while also working with environmental charities.

However, the high-flying individuals used as examples by Lovegrove are no wandering hippies. Take Dr Paul Farmer. He is professor of both medicine and anthropology at Harvard, a physician at a Boston hospital, and co-founder of Partners in Health, a not-for-profit for which he spends half the year working in Haiti.

And Jeff Seabright, who started in US federal government and led President Bill Clinton’s task force for climate change before moving to Texaco, Coca-Cola and Unilever.

While Lovegrove’s book aims to convey the virtues of breadth in building a life and career, he points out that it “should not be taken as a recipe for ‘randomness’, for the professional dilettante, [or] for being a ‘jack-of-all-trades and master of none’”.

A successful working person should aim to be a hybrid with both breadth and depth, which will give would-be employers a reason to call them.

Lovegrove has come up with “six dimensions” based on interviews with 200 people who have achieved this tricky balance. The dimensions are: applying your moral compass; defining an intellectual thread; developing transferable skills; investing in contextual intelligence; building an extended network, and having a prepared mind.

Lovegrove’s approach can be viewed as a T-shape, where the vertical stroke of the T is a deep expertise in subject matter, while the horizontal stroke is the ability to work outside a core area.

Lesser mortals can learn from the successes of Lovegrove’s overachievers. He argues that everyone should have the confidence and freedom to follow less linear and blinkered career paths, and this rings true.

The Mosaic Principle provides the bridge between the established portfolio career model that might straddle business, third sector and government, and the millennial, gig-economy, freelance model.

While senior executives have always sought to add strings to their bow by taking non-executive directorships, or becoming a consultant and building a portfolio career, Lovegrove’s book legitimises this approach for those in the middle years of a career, those who do not have the confidence of the younger, millennial generation to step off the corporate ladder and pursue their own odyssey.

About Author:
Nick Lovegrove is a veteran consultant, executive coach, and writer. He is currently the US managing partner of the Brunswick Group, a global corporate advisory firm. He previously spent more than thirty years of his career at McKinsey & Company, where he became a senior partner in the London Office, and then the managing partner of the Washington, DC Office. He took time out of his McKinsey career to serve as a strategic advisor to British prime minister Tony Blair; and he has worked with multiple organizations in the business, government and non-profit sectors. Nick has been a senior fellow at Harvard University’s John F. Kennedy School of Government; a senior fellow in the Global Economy program of the Brookings Institution; and a visiting lecturer at Oxford University’s Blavatnik School of Government. He is a graduate of Oxford and Harvard universities, and has an MBA from INSEAD in France.

Nick is the author of The Mosaic Principle: The Six Dimensions of a Remarkable Life and Career, which will be published by Public Affairs in the US on November 1, 2016 and by Profile Books in the UK on January 26, 2017.

Nick lives in Washington, D.C. with his wife Alyssa and their four children.

Be the first to review “The Mosaic Principle : the Six Dimensions Of A Remarkable Life And Career” Cancel reply