Shop - THE MAGICIAN’S NEPHEW : The Chronicles of Narnia Book 1 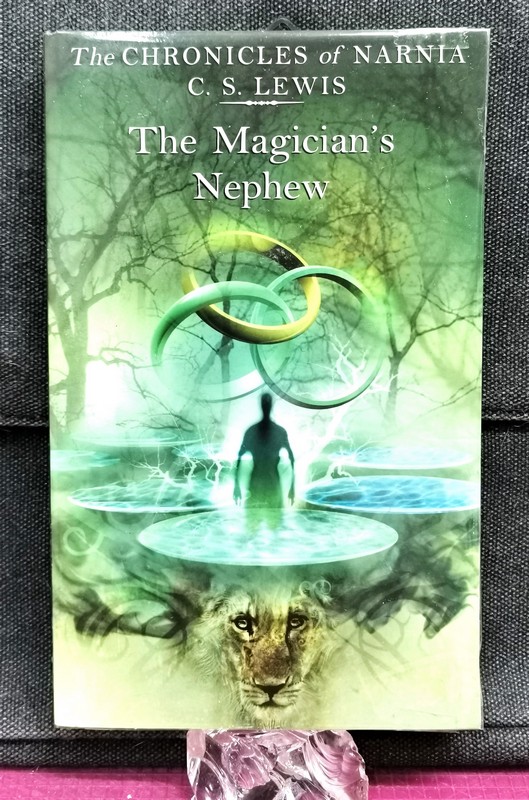 THE MAGICIAN’S NEPHEW : The Chronicles of Narnia Book 1

SECRETS OF THE MARKETING MASTERS : What The Best Marketers Do – And Why It Works

THE LAWS OF DISRUPTION : Harnessing the New Forces that Govern Life and Business in the Digital Age

The Story Details The First Trip To Narnia by Digory Kirke

Narnia… where Talking Beasts walk… where a witch waits… where a new world is about to be born.

The Magician’s Nephew is a fantasy children’s novel by C. S. Lewis, published in 1955 by The Bodley Head. It is the sixth published of seven novels in The Chronicles of Narnia (1950–1956).

In the first book of The Chronicles of Narnia, C.S. Lewis shows us how it all began — the glorious birth of Narnia at the hand of its unforgettable King. It is followed by six more books that collectively tell the history of a world that has become as real as our own.

The frame story, set in England, features two children ensnared in experimental travel via “the wood between the worlds”. Thus, the novel shows Narnia and our middle-aged world to be only two of many in a multiverse, which changes as some worlds begin and others end. It also explains the origin of foreign elements in Narnia, not only the lamp-post but also the White Witch and a human king and queen.

On a daring quest to save a life, two friends are hurled into another world, where an evil sorceress seeks to enslave them. But then the lion Aslan’s song weaves itself into the fabric of a new land, a land that will be known as Narnia. And in Narnia, all things are possible.

The story begins in London during the summer of 1900. Two children, Digory and Polly, meet while playing in the adjacent gardens of a row of terraced houses. They decide to explore the abandoned attic beyond Digory’s house, but do not walk far enough, and find themselves in Uncle Andrew’s study. Uncle Andrew tricks Polly into touching a yellow magic ring, causing her to vanish.

Then he explains to Digory that he has been dabbling in magic, and that the rings allow travel between one world and another. He blackmails Digory into taking another yellow ring to follow wherever Polly has gone, and two green rings so that they both can return.

Digory finds himself transported to a sleepy woodland with an almost narcotic effect; he finds Polly nearby. The woodland is filled with pools. Digory and Polly surmise that the wood is not really a proper world at all but a “Wood between the Worlds”, similar to the attic that links their houses back in England, and that each pool leads to a separate universe.

They decide to explore a different world before returning to England, and jump into one of the nearby pools. They then find themselves in a desolate abandoned city of the ancient world of Charn. Inside the ruined palace, they discover statues of Charn’s former kings and queens, which degenerate from the fair and wise to the unhappy and cruel. They find a bell with a hammer and an inscription inviting the finder to strike the bell.

Despite protests from Polly, Digory rings the bell. This awakens the last of the statues, a witch queen named Jadis, who—to avoid defeat in battle—had deliberately killed every living thing in Charn by speaking the “Deplorable Word”. As the only survivor left in her world, she placed herself in an enchanted sleep that would only be broken by someone ringing the bell.

The children recognise Jadis as evil and attempt to flee, but she follows them back to England by clinging to them as they clutch their rings. In England, she discovers that her magical powers do not work, although she retains her superhuman strength. Dismissing Uncle Andrew as a poor magician, she enslaves him and orders him to fetch her a “chariot”—a hansom cab—so she can set about conquering Earth.

They leave, and she attracts attention by robbing a jewellery store in London. The police chase after her cab, until she crashes at the foot of the Kirke house. Jadis breaks off and tears an iron rod from a nearby lamp-post, using it to fight off police and onlookers when they mock her.

When Jadis threatens the crowd, Polly and Digory grab her and put on their rings to take her out of their world – along with Uncle Andrew, Frank the cab-driver, and Frank’s horse, Strawberry, who were all touching each other when the children grabbed their rings.

In the Wood between the Worlds, Strawberry, looking to drink from one of the ponds, accidentally brings everyone into another world: a dark, empty void. At first, Digory believes it to be Charn, but Jadis recognises it as a world not yet created.

They then all witness the creation of a new world by the lion Aslan, who brings stars, plants, and animals into existence as he sings. Jadis, as terrified by his singing as the others are attracted to it, tries to kill Aslan with the iron rod; but it rebounds harmlessly off him, and in the creative soil of the new world it sprouts into a growing lamp-post. Jadis flees in terror.

Aslan gives some animals the power of speech, commanding them to use it for justice and merriment or else risk becoming regular animals once again. Aslan confronts Digory with his responsibility for bringing Jadis into his young world, and tells Digory he must atone by helping to protect the new land of Narnia from her evil.

Aslan transforms the cabbie’s horse into a winged horse called Fledge, and Digory and Polly fly on him to a distant garden high in the mountains. Digory’s task is to take an apple from a tree in this garden and plant it in Narnia. At the garden Digory finds a sign warning not to steal from the garden.

Digory picks one of the apples for his mission, but their overpowering smell tempts him. Jadis appears, having herself eaten an apple to become immortal, leaving her with pale white skin. She tempts Digory either to eat an apple himself and join her in immortality, or steal one to take back to Earth to heal his dying mother.

Digory resists, knowing his mother would never condone theft, but hesitates. He sees through the Witch’s ploy when she suggests he leave Polly behind – not knowing Polly can get away by her own ring. Foiled, the Witch departs for the North, and taunts Digory for his refusal to eat the apple and gain immortality.

Digory returns to Narnia and plants the apple, which grows into a mature tree behind them while the coronation proceeds. Aslan tells Digory how the tree works – anyone who steals the apples gets their heart’s desire, but in a form that makes it unlikeable. In the Witch’s case, she has achieved immortality, but it only means eternal misery because of her evil heart.

Moreover, the magic apples are now a horror to her, such that the apple tree will repel her for centuries to come, but not forever. With Aslan’s permission, Digory then takes an apple from the new tree to heal his mother. Aslan returns Digory, Polly, and Uncle Andrew to England. Frank and his wife, Helen (transported from England by Aslan) stay to rule Narnia as its first King and Queen. The Narnian creatures live in peace and joy, and neither the Witch nor any other enemy will come to trouble Narnia for many hundreds of years.

Digory’s apple restores his mother’s health as his father returns for good after being away on business in India, and he and Polly remain lifelong friends. Uncle Andrew reforms and gives up magic, but still enjoys bragging about his adventures with the Witch.

Digory plants the apple’s core with Uncle Andrew’s rings in the back yard of his aunt’s home in London, and it grows into a large tree. Soon afterwards, Digory’s family inherits a mansion in the country, and many years later the apple tree blows down in a storm. Digory, now a middle-aged professor, has its wood made into a wardrobe, setting up the events in The Lion, the Witch and the Wardrobe.

This is a stand-alone novel, but if you want to journey back to Narnia, read The Lion, the Witch and the Wardrobe, the second book in The Chronicles of Narnia.

Clive Staples Lewis (1898-1963) was one of the intellectual giants of the twentieth century and arguably one of the most influential writers of his day. He was a Fellow and Tutor in English Literature at Oxford University until 1954, when he was unanimously elected to the Chair of Medieval and Renaissance Literature at Cambridge University, a position he held until his retirement. He wrote more than thirty books, allowing him to reach a vast audience, and his works continue to attract thousands of new readers every year. His most distinguished and popular accomplishments include Out of the Silent Planet, The Great Divorce, The Screwtape Letters, and the universally acknowledged classics The Chronicles of Narnia. To date, the Narnia books have sold over 100 million copies and have been transformed into three major motion pictures.