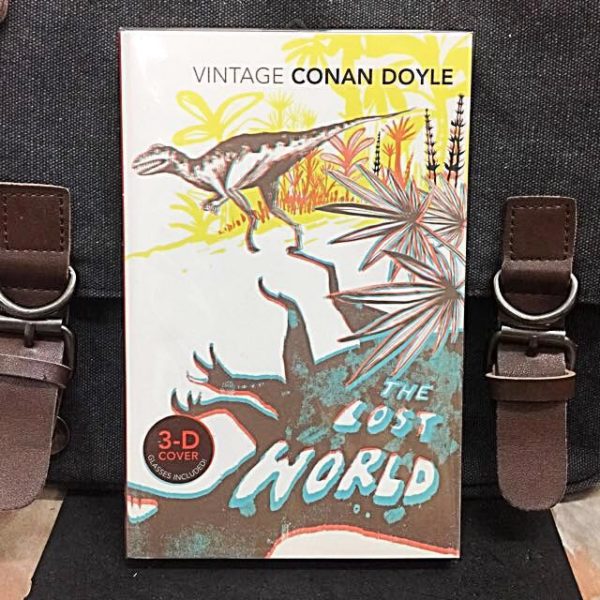 This 70 years of timeless bestseller in paperback edition is a bran-new book. The original new book is sold at usual price RM67.50. Now here Only at RM12.

The Lost World is a novel released in 1912 by Sir Arthur Conan Doyle concerning an expedition to a plateau in the Amazon basin of South America where prehistoric animals (dinosaurs and other extinct creatures) still survive. It was originally published serially in the popular Strand Magazine and illustrated by New-Zealand-born artist Harry Rountree during the months of April–November 1912.

Arthur Conan Doyle’s ‘The Lost World‘ is the source and origin of all modern dinosaur books and films – an adventure story with everything.

Dangerous crises abound, in several exotic locations, with a host of strange and terrifying beasts and the occasional damsel in distress thrown in for good measure.

But behind all the derring-do, Conan Doyle is gently satirising the idea of Science as a pure discipline, unsullied by thoughts of personal gain; and ridiculing the close-minded, hide-bound intellectuals who possess the qualifications, but not the courage, to search diligently for the truth.

The notorious Professor Challenger claims that dinosaurs still walk the earth. When the press and the scientific community ridicule him, Challenger vows to show them proof. And so he sets off for South America, accompanied by a big game hunter, a scientist and a young reporter eager to impress the woman he loves.

On a remote plateau in the middle of impenetrable jungle, they discover the impossible truth, but must battle monsters and men before they can bring their testimony home.

The character of Professor Challenger was introduced in this book. The novel also describes a war between indigenous people and a vicious tribe of ape-like creatures.

Edward Malone, a reporter for the Daily Gazette, goes to his news editor, McArdle, to procure a dangerous and adventurous mission to impress the woman he loves, Gladys Hungerton.

He is sent to interview Professor George Edward Challenger, who has assaulted four or five other journalists, to determine if his claims about his trip to South America are true. After assaulting Malone, Challenger reveals his discovery of dinosaurs in South America.

Having been ridiculed for years, he invites Malone on a trip to prove his story, along with Professor Summerlee and Lord John Roxton, an adventurer who knows the Amazon and several years prior to the events of the book helped end slavery by robber barons in South America.

They reach the plateau with the aid of Indian guides, who are superstitiously scared of the area. One of these Indians, Gomez, is the brother of a man that Roxton killed the last time he was in South America.

When the expedition manages to get onto the plateau, Gomez destroys their bridge, trapping them. Their “devoted negro” Zambo remains at the base, but is unable to prevent the rest of the Indians from leaving.

Deciding to investigate the lost world, they are attacked by pterodactyls in a swamp, and Roxton finds some blue clay in which he takes a great interest.

After exploring the plateau and having some adventures in which the expedition narrowly escapes being killed by dinosaurs, Challenger, Summerlee, and Roxton are captured by a race of ape-men. While in the ape-men’s village, they find out that there is also a tribe of humans (calling themselves Accala) inhabiting the other side of the plateau, with whom the ape-men (called Doda by the Accala) are at war. Roxton manages to escape and team up with Malone to mount a rescue.

They arrive just in time to prevent the execution of one of the professors and several other humans, including a young man who turns out to be a prince of sorts among the Accala. The rescued Accala then take the party to their tribe. With the help of the expediton’s firepower, the Accala defeat the ape-men, taking control of the whole plateau.

After witnessing the power of their guns, the human tribe does not want the expedition to leave, and tries to keep them on the plateau. Challenger first plans to fashion a series of balloons to carry the party off the plateau. However, with the help from the young prince of the Accala whom they had saved, the expedition finally discovers a tunnel that leads to the outside, where they meet up with Zambo and a large rescue party.

Upon returning to England, they present their report, which include pictures and a newspaper report by Edward. However, many detractors continue to dismiss the expedition’s account, much as they had Challenger’s original story. Having anticipated this, Challenger shows them a live pterodactyl as proof, which then escapes and flies out into the Atlantic Ocean.

When the four of them have dinner, Roxton shows them why he was so interested in the blue clay. It contains diamonds, about £200,000 worth, to be split between them. Challenger plans to open a private museum, Summerlee plans to retire and categorise fossils, and Roxton plans to go back to the lost world. Malone returns to his love, Gladys, only to find that she had married a clerk while he was away. With nothing keeping him in London, he volunteers to be part of Roxton’s second trip.

Amazon Review
Forget the Michael Crichton book (and Spielberg movie) that copied the title. This is the original: the terror-adventure tale of The Lost World. Writing not long after dinosaurs first invaded the popular imagination, Sir Arthur Conan Doyle spins a yarn about an expedition of two scientists, a big-game hunter and a journalist (the narrator) to a volcanic plateau high over the vast Amazon rain forest. The bickering of the professors (a type Doyle knew well from his medical training) serves as witty contrast to the wonders of flora and fauna they encounter, building toward a dramatic moonlit chase scene with a Tyrannosaurus Rex. And the character of Professor George E. Challenger is second only to Sherlock Holmes in the outrageous force of his personality: he’s a big man with an even bigger ego, and if you can grit your teeth through his racist behaviour towards the natives, he’s a lot of fun.

Be the first to review “The lost world” Cancel reply