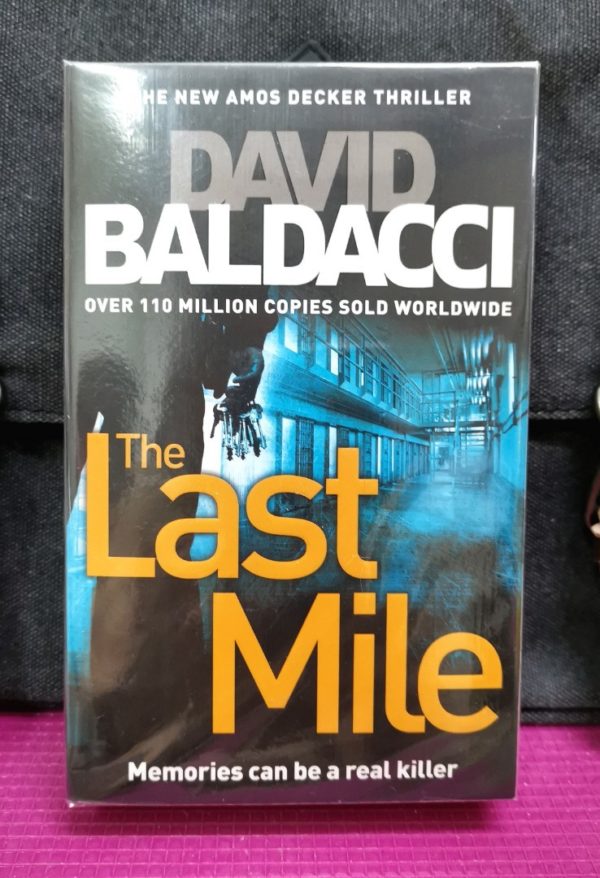 A gripping thriller from David Baldacci, The Last Mile is perfect for fans of Lee Child and James Patterson.

Memories can be a real killer.

When a convicted killer is saved by another man’s confession, Amos Decker, now an FBI special task force detective, must find the truth in this “utterly absorbing” #1 New York Times bestseller (Associated Press).

Convicted murderer Melvin Mars is counting down the last hours before his execution–for the violent killing of his parents twenty years earlier–when he’s granted an unexpected reprieve. Another man has confessed to the crime.

Amos Decker, newly hired on an FBI special task force, takes an interest in Mars’s case after discovering the striking similarities to his own life: Both men were talented football players with promising careers cut short by tragedy.

Both men’s families were brutally murdered. And in both cases, another suspect came forward, years after the killing, to confess to the crime. A suspect who may or may not have been telling the truth.

The confession has the potential to make Melvin Mars–guilty or not–a free man. Who wants Mars out of prison? And why now?

But when a member of Decker’s team disappears, it becomes clear that something much larger–and more sinister–than just one convicted criminal’s life hangs in the balance.

Decker will need all of his extraordinary brainpower to stop an innocent man from being executed.

Melvin Mars awaits his fate on Death Row. He was one of America’s most promising football stars until, aged twenty, he was arrested and convicted for the murder of his parents just as he was due to begin a very lucrative contract with the NFL.

When Amos Decker, newly appointed special agent with the FBI, hears the news that Melvin was saved in the final seconds before his execution because someone has confessed to the killings, he persuades his boss to allow him to carry out an investigation into the Mars murders.

There are facts about the case which don’t add up, and as the investigation deepens, Decker and his team uncover layer upon layer of lies and deception which are rooted at a time in American history which most would rather forget, but some seem keen to remember.

There is someone out there with a lot to hide, and a secret that everyone is looking for. A race against time ensues because, when revealed, that information threatens to tear apart the corridors of power at the very highest level.

The case proves to be life-changing for both Mars and Decker in ways that neither could ever have imagined.

The Last Mile is the second in the Amos Decker series, following Memory Man.

When readers first met Amos Decker, he was a socially inept giant mired in the past; his wife, daughter, and brother-in-law were brutally murdered in Decker’s own home.

Living out of a tiny motel room and working as a private investigator, Decker finally solved their murders and helped the FBI put a relentless killer to bed.

The team reports for their first day of duty and almost immediately travels from Quantico to Texas to work the case of a former NFL shoo-in, Melvin Mars, who—on the brink of the pro football draft—was arrested, charged, and convicted of killing his parents.

But on the eve of Mars’ execution, another man in another state, also on death row, confesses to killing the pair. Upon their arrival in Texas, the team from Quantico finds the case against Mars makes less and less sense.

When readers first met Decker, he was maladjusted and brilliant, his NFL career cut short by a vicious hit that altered his life and left him with perfect recall. And it was his incredible memory that solved his cases.

This new, improved, vanilla Decker is less interesting than the damaged hero Baldacci first introduced. And while the case starts out with plenty of potential, Decker’s incredible memory really isn’t flexed much here, so it’s ultimately solved by ordinary detective work.

Riddled with implausible situations and light on the research, this plodding tale is for die-hard Baldacci fans only.

About the Author
David Baldacci is a global #1 bestselling author, and one of the world’s favorite storytellers. His books are published in over 45 languages and in more than 80 countries, with over 130 million worldwide sales. His works have been adapted for both feature film and television. David Baldacci is also the cofounder, along with his wife, of the Wish You Well Foundation, a nonprofit organization dedicated to supporting literacy efforts across America.

Be the first to review “The Last Mile” Cancel reply