Shop - THE GREAT DEGENERATION : How Institutions Decay and Economies Die 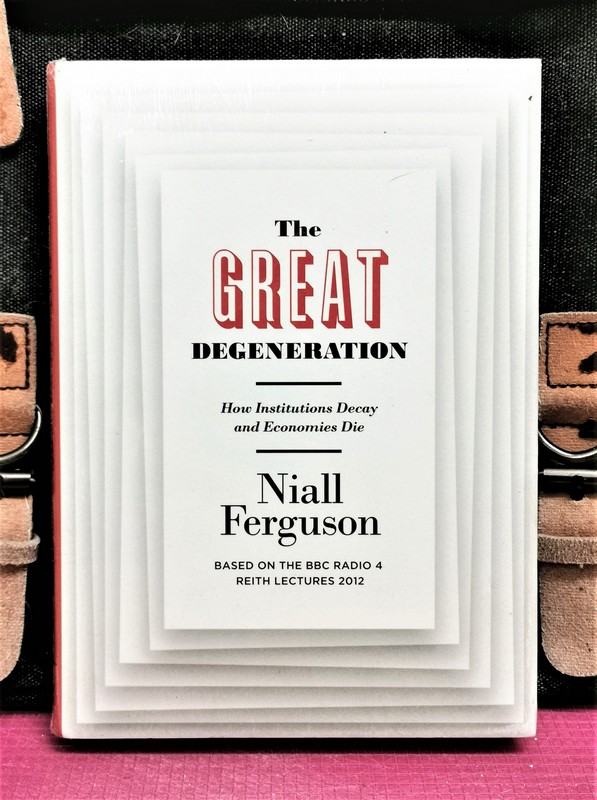 THE GREAT DEGENERATION : How Institutions Decay and Economies Die

HOW NOT TO SELL : Why You Can’t Close The Deal and How To Fix It

The Great Degeneration: How Institutions Decay and Economies Die is a 2013 book by the British historian Niall Ferguson, in which the author argues that following the conclusion of World War II, the economic and political supremacy of Western Europe and North America is fading rapidly. He believes that the West is in decline.

Ferguson describes an “institutional malaise” that is threatening 500 years of development in the West. Financial Times reviewer Samuel Brittan said the book offers “an informative and enjoyable read.” From the bestselling author of The Ascent of Money and The Square and the Tower, a searching and provocative examination of the widespread institutional rot that threatens our collective future

What causes rich countries to lose their way?

The decline of the West is something that has long been prophesied. Symptoms of decline are all around us today: slowing growth, crushing debts, increasing inequality, aging populations, antisocial behavior.

But what exactly has gone wrong?

The answer, Niall Ferguson argues in The Great Degeneration, is that our institutions—the intricate frameworks within which a society can flourish or fail—are degenerating. With characteristic verve and historical insight, Ferguson analyzes the causes of this stagnation and its profound consequences for the future of the West.

Niall Ferguson puts forward the argument that the failure of West’s ability to recover from the great recession has less to do with simply focusing on the Band-aid solutions of stimulus, austerity, low interest rates, etc, and more to do with a complexity of regulation that tends to mire nations well-advanced in the cultivation of democratic institutions.

The Great Degeneration is an incisive indictment of an era of negligence and complacency—and to arrest the breakdown of our civilization, Ferguson warns, will take heroic leadership and radical reform. Representative government, the free market, the rule of law and civil society: these were once the four pillars of West European and North American societies.

It was these institutions, rather than any geographical or climatic advantages, that set the West on the path to global dominance after around 1500. In our time, however, these institutions have deteriorated in disturbing ways.

In their search to understand the rise and fall of local, regional, and national economies, economists have in recent decades focused increased attention on the workings and saliency of noneconomic factors such as values and institutions.

On one level, this attention marks a growing recognition, at least by some parts (but by no means all) of the economics profession, concerning the limits of approaches based heavily on the mathematics and econometrics that continue to overpopulate so much of contemporary economics literature. But it also reflects many economists’ willingness to take into account the insights attained through other disciplines.

This book suggests that four institutions are critical to what the founders called ” happiness.” He argues that each is in a state of decline and concludes those declines have long term consequences. Institutions are key to economic growth – he names The Four :
1. Democracy,
2. Capitalism,
3. The Rule of Law
4. Civil Society.

Our democracies have broken the contract between the generations by heaping IOUs on our children and grandchildren. Our markets are increasingly distorted by over-complex regulations that are in fact the disease of which they purport to be the cure. The rule of law has metamorphosed into the rule of lawyers. And civil society has degenerated into uncivil society, where we lazily expect all our problems to be solved by the state.

The Degeneration of the West a powerful – and in places polemical – indictment of an era of negligence and complacency. While the Arab world struggles to adopt democracy, and while China struggles to move from economic liberalization to the rule of law, Europeans and Americans alike are frittering away the institutional inheritance of centuries. To arrest the degeneration of the West’s once dominant civilization, Ferguson warns, will take heroic leadership and radical reform.

This book is based on Niall Ferguson’s 2012 BBC Reith Lectures, which were broadcast under the title The Rule of Law and Its Enemies.

Our current financial crisis is a model example of badly designed regulation and unintended consequences run amok. Ferguson guides us through five major policy decisions that set the United States on the course it finds itself on now.

Firstly, bank executives had their own wealth linked to institutional profits through shares and options, leading to a distortion of growth in many firms. Secondly, financial regulations eased to allow corporations to assess their own risk and set their own capital holdings, meaning that the same people who determined risk and liquidity also had personal gains to consider.

Thirdly, central banks adopted the bad habit of quickly intervening to cut interest rates whenever the economy needed a kick. But instead of rebalancing equilibrium when the economy picked up steam, they held off on raising rates to avoid raising inflation. We see the fallout low interest rates everywhere: low productivity, no incentive to save, great temptation to over-borrow, anemic growth. At the same time, core inflation has been artificially subdued by leaving out the cost of food and energy. So prices have skyrocketed around the world on items that affect most ordinary people — the very standard of inflation — without creating inflationary bubbles on paper.

Add to this already dangerous mix Congress approved legislation encouraging greater home ownership for lower-income families, setting up a framework for sub-prime mortgages on the back of government-sponsored lenders Freddie Mac and Fannie Mae. Then top it all off with a Chinese government eager to keep its own manufacturing sector competitive by spending trillions of its currency on American bonds, giving the U.S. an enormous line of credit to spend almost as quickly as it received.

The economy is as delicate and self-perpetuating as an ecosystem, Ferguson brilliantly argues, the most complex creation man has ever managed. We are now facing a “complexity catastrophe”, a point where it is frankly impossible to see the whole machine at work and respond accordingly. Our regulatory bodies need to take this into account, even though it is politically unwise advice. Otherwise, the author contends, we are doomed to exacerbate the inequities between Jean-Jacques Rousseau’s sovereign and its people, and beyond that our generation and those to come.

Niall Ferguson is one of the world’s most renowned historians. He is the author of Paper and Iron, The House of Rothschild, The Pity of War, The Cash Nexus, Empire, Colossus, The War of the World, The Ascent of Money, High Financier, Civilization, The Great Degeneration, Kissinger, 1923-1968: The Idealist, and The Square and the Tower. He is Senior Fellow at the Hoover Institution, Stanford University, and a Visiting Professor at Tsinghua University, Beijing. His many awards include the Benjamin Franklin Prize for Public Service (2010), the Hayek Prize for Lifetime Achievement (2012) and the Ludwig Erhard Prize for Economic Journalism (2013).