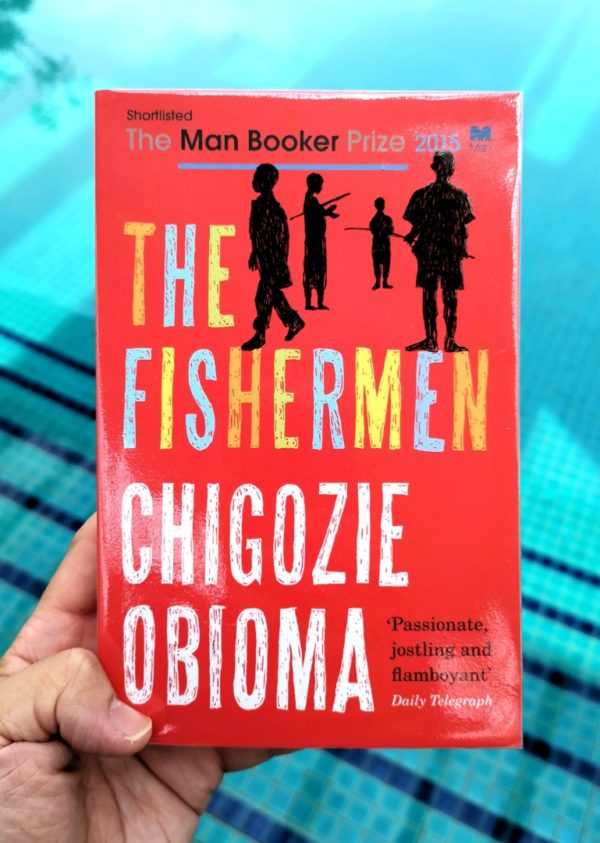 ★★ Winner of the 2015 FT/Oppenheimer Emerging Voices Award for Fiction ★★

★★ Finalist for the 2015 Center for Fiction First Novel Prize ★★

★★ Longlisted for the 2015 Etisalat Prize for Literature ★★

Named a Best Book of the Year on more than a dozen lists, including the New York Times Book Review, Wall Street Journal, Washington Post, and NPR

The Fishermen is the debut novel by Nigerian author Chigozie Obioma, published in 2015.

In a Nigerian town in the mid 1990’s, four brothers encounter a madman whose mystic prophecy of violence threatens the core of their close-knit family.

A striking debut novel about an unforgettable childhood, by a Nigerian writer the New York Times has crowned “the heir to Chinua Achebe.”

The novel follows four brothers in a quiet neighbourhood of a Nigerian town, who are given a violent prophecy which shakes their family to the core. It is set in the 1990s, during the rule of Sani Abacha.

Four brothers, Ikenna, Boja, Obembe, and Benjamin, begin to fish at the Omi-Ala river near their home in a quiet neighbourhood of the city of Akure in Nigeria, despite being forbidden from doing so by their parents, as the river is heavily polluted.

On one of their fishing trips, they encounter a local madman, Abulu, who follows them shouting the name of Ikenna, the oldest brother.

The other children flee, but the four brothers stop to listen, as Abulu shouts a series of prophecies: that Ikenna will become blind, mute, crippled.

He finishes by prophesying that Ikenna will be killed by a fisherman. Ikenna thinks this means that one of his brothers will kill him, and he gradually turns against them. The prophecy undoes the family and the expectations the brothers’ parents have for them.

Told from the point of view of nine year old Benjamin, the youngest of four brothers, THE FISHERMEN is the Cain and Abel-esque story of an unforgettable childhood in 1990’s Nigeria, in the small town of Akure.

When their strict father has to travel to a distant city for work, the brothers take advantage of his extended absence to skip school and go fishing.

At the ominous, forbidden nearby river, they meet a dangerous local madman who persuades the oldest of the boys that he is destined to be killed by one of his siblings.

What happens next is an almost mythic event whose impact-both tragic and redemptive-will transcend the lives and imaginations of its characters and its readers.

Dazzling and viscerally powerful,The Fishermen never leaves Akure but the story it tells has enormous universal appeal. Seen through the prism of one family’s destiny, this is an essential novel about Africa with all of its contradictions-economic, political, and religious-and the epic beauty of its own culture.

With this bold debut, Chigozie Obioma emerges as one of the most original new voices of modern African literature, echoing its older generation’s masterful storytelling with a contemporary fearlessness and purpose.

There is richness and beauty in the details of this story – the daily life and interactions of the family set against the political and social backdrop of Nigeria in the late 90’s. Ben describes each member of his family as an animal, often a bird, and poetically describes how that family member embodies that animal’s characteristics.
———————————————————————-
Review From The Medium : by Sokuma Theophilus

This story is a typical plotted story of how a tragedy disrupts the homeostasis of its characters.

A family of seven; a seemingly happy family with clearly defined hierarchy. The Father was the man of the house. His words stood.

The Father was the typical Nigerian Father; charting the trajectory of his children’s lives, making sure they have the best so they could end up being the best.

He was a leader. An eagle, like Obioma described him. His wife, the falcon was by his side, nagging him some times and acquiescing to him at other times.

The story however focuses on the first four siblings; Ikenna the sparrow, Boja the fungus (I still have an issue with this metaphor used for Boja), Obembe the search dog, and Benjamin the moth.

(There are two other siblings, the egrets, but don’t really play much central role in the plot of the story. Their significance however is gleamed towards the end of the story as they become “the wool-white birds that appear in flocks after a storm, their wings unspotted, their lives unscathed”. They I believe became the lungs through which the parents breathe. They sailed peacefully through a storm without waking up)

Chigiozie Obioma introduces the story with a line “We were fishermen”, which makes you think more about the title of the book and why the author chose this title. You start asking questions. They were fishermen but are no more. What happened? The story sucks you in from the first line.

Here we have Benjamin, the fourth of the six siblings narrating the story in the past tense (This is not a big deal really but for me it is. A significant one).

I loved the well defined role each sibling had. They had over the years come to know who is meant to do what and how to relate with each other; a sort of synergistic hierarchy (that’s if this phrase exists). Ikenna, of course was the leader and Boja was sort of his right hand man. (But how that changed in a blink of an eye. Sadly)

Benjamin is the youngest of the four siblings, just nine years of age at the time the narration kicked off. We get to know this narration is occurring at later period. Long after the hurricane, tsunami and every thing disastrous happened.

A disaster involving a supposedly cursed river and the act of fishing (Being Fishermen). He talks about the transfer their father got to Yola, a state in Northern Nigeria and how the morning of their father’s departure was the last time the family was together as one.

These subtle lines creates a sense of anticipation in you and makes you wonder about what happened exactly.

☞ Did the brothers leave each other?

☞ Did they travel out or did the family get torn apart?

☞ What exactly did the narrator mean?

I would commend Obioma for this. At every point of the story, my mind was trying to figure out what exactly would happen next.

The story was set in Akure. We have an Igbo family living in a Yoruba land. We get to see the beauty of living in a city that you won’t consider to be your roots based ethnic differences.

We get to see the siblings wielding language as a weapon and vehicle; Speaking English, Yoruba and Igbo well depending on the context and the gravity of the issue at hand.

The parents were also warriors of language, how one Language is appropriate for scolding and another for giving of advice hidden in proverbs. We see how one language falls off easily in a fit of range.

Multilingualism offers you the ability to be expressive across various contexts. How one language seems more fit than another to drive home a point.

The story is a harrowing tale of how the seams of family gets torn apart. The characters that acquaint themselves with you in the first few pages are not the same characters that close the door against you once you are finished with the book. You could picture them with their wrinkles and tears as the words dry up from the pages.

In this story, we see how a prophecy from a mad man, whose prophecies were believed to always come to pass disrupts a family. We get to see the much damage fear can cause, how it can lead you to be disillusioned and become paranoid.

We get to see how this fear becomes a catalyst for a chain reaction which inevitably brings the prophecy to pass (I’m trying hard not to drop spoilers).

At some point Obioma makes you hope. He makes you believe that the prophecy wouldn’t come to pass. He makes you shed tears for Ikenna who was the object of the doomed prophecy.

You get to observe the metamorphosis of Ikenna and how fear and paranoia stemming from the prophecy riddled the seams of this metamorphosis with botched edges.

An albeit evil one. You get to see how fear and paranoia destroyed a once happy and closely knitted sibling relationship.

You see how two close brothers become enemies and how accumulated rage brings the prophecy to pass. At the point of the prophecy getting fulfilled my heart broke. I had to stop reading to wipe my tears. I didn’t know what to think after that.

The first tragedy was a butterfly effect that led to further tragedy. A sort of slippery slope where everything kept going wrong; the non existent spiders the mother kept seeing.

Her cradling of grief and the birthing of miles and miles of distance from self and reality; depersonalization or derealization?, the metamorphosis of Obembe, the silence lurking behind the curtains, the further tearing of the seams of siblinghood.

I also loved Obioma’s use of words. How he painted an otherwise gruesome scene into a beautiful image, sparing you the pain of the occurrence and at the same time captivating you.

You end up cradling your grief, and getting awed by the magnificence of language and how words hold so much depth when knitted together. If you’re like me, your brain would release endorphins and probably dopamine.

☞ Who would describe suicide in such beautiful way?

☞ Who would describe death in such beautiful way?

☞ Who describes suicide in such peaceful ☞ language?

It made me think and feel and become aware (I’m a sucker for beautifully sculpted sentences).

It sort of felt like when two substances come into contact in an act of creation. Or when the wind carries substances on its back in an act of ascension? or was it a transcendental moment? Making death seem so weak.

Like slipping out of a garment with an aura of tranquility:

✔ escaping to freedom on the wings of forever?

✔ a communion with the substance of the universe?

✔ Can death be peaceful and attractive? Obioma made me think so!

This book is a must read!

There are many things I would love to say about this book but this is a review and not a dissertation.

The book covers themes like loss, family relationships, vengeance. I loved that I saw bits of myself in the siblings. It made me think about the collective unconscious of the human race. If it does exist.

Some books make an impression on your heart. The words carry in them a flame that sears itself into your soul. This is good story telling.

About the Author
CHIGOZIE OBIOMA was born in 1986 in Akure, Nigeria. His short stories have appeared in the Virginia Quarterly Review and New Madrid. He was a Fall 2012 OMI Fellow at Ledig House, New York. He has lived in Nigeria, Cyprus and Turkey, and currently resides in the United States, where he has completed an MFA in Creative Writing at the University of Michigan. The Fishermen is his first novel.

Be the first to review “The Fishermen” Cancel reply