Shop - The Empire of Night 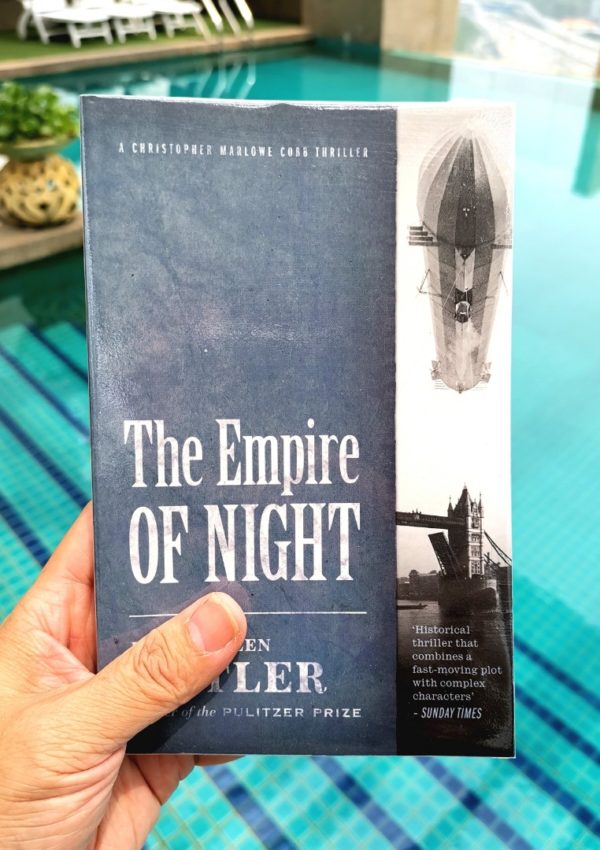 The Empire of Night

START WITH WHY : How Great Leaders Inspire Everyone To Take Action

In the first two books of his acclaimed Christopher Marlowe Cobb series, The Hot Country and The Star of Istanbul, Pulitzer Prize winner Robert Olen Butler captured the hearts of historical crime fiction fans with the artfulness of his World War I settings and his charismatic leading man, a Chicago journalist recruited by American intelligence.

In The Empire of Night, it is 1915, and President Woodrow Wilson is still assessing the war’s threat to the United States.

After proving himself during the Lusitania mission, Kit is now a full-blown spy, working undercover in a castle on the Kentish coast owned by a suspected British government mole named Sir Albert Stockman.

And Kit is again thrown together with a female spy- his own mother, the beautiful and mercurial Isabel Cobb, who also happens to be a world-famous stage actress.

Starring in a touring production of Hamlet, Isabel’s offstage role is to keep tabs on the supposed mole, an ardent fan of hers, while Kit tries to figure out Stockman’s secret agenda.

Following his mother and her escort from the relative safety of Britain into the lion’s den of Berlin, Kit must remain in character, even under the very nose of the Kaiser.

Empire of the Night is the third book in the Christopher ‘Kit’ Marlowe Cobb spy thriller series from the excellent writer Robert Olen Butler.

Butler once again has researched and written an exciting story that draws you, some may accuse him of being formulaic, but one thing this book is; is predictable.

There are once again nods to some historic figures some of whom you will have heard of such as Einstein and others such as Dr Fritz Haber you may not have heard of.

Kit Cobb is back in London at the Tavistock Hotel, where the United States have placed their journalist come spy when required.

While little over 150 miles away the First Battle of Ypres has taken place and London night life seems to be continuing apace. Cobb has received a ticket from his mother to see her play Hamlet while they are both in London.

He is later informed that he and his mother are working together to spy on Sir Albert Stockman a Member of Parliament for a Kent constituency and suspected traitor.

Cobb has been given a back story of being a journalist who is writing for a pro-German American newspaper that is focusing on the work of Isobel Cobb.

He is invited along with his mother for a weekend to spend the weekend at the home of Sir Albert Stockman.

He takes the opportunity to search for evidence either for or against Stockman as to whether he is a traitor or not. When one of his employees is murdered he disappears along with Isobel Cobb in the night.

Then begins his real work as an American spy as he is sent to Berlin to spy on Albert Stockman and find out what he is doing.

So begins the many twists in the story as he has to somehow stay ahead of Stockman, find out what he wants to do or is going to do.

As well as find out why Stockman has such an interest in the Zeppelins that have been bombing London during the course of the war.

What we get is an introduction to the thoughts of the Germans towards their enemy the English and how the blockade was affecting the people of Germany.

He also finds not everyone is supportive of the Kaiser but who he can trust is another matter. He also needs to stay as close as he can to Stockman without being caught or suspected to be an American spy.

At the same time we see Cobb’s relationship with his mother develop further and how they need each other to stay alive.

Robert Olen Butler has written an excellent spy thriller that has the right amounts of twists while remaining a pacey story, and avoiding the usual spy clichés.

His research is second to none, especially when he mentions a beer that has not been brewed in nearly 75 years which shows how far he is willing to go to make sure the lives are reflective of the period.

An excellent spy thriller that is not predictable but enjoyable from beginning to end.

Strong characters and a vivid sense of place make this third installment in the Cobb series a winner.

Intrigue and the romance of adventure pace this historical thriller by Robert Olen Butler. It is the third installment in his series featuring journalist/spy Christopher Marlowe Cobb, set in the administration of Woodrow Wilson — a period unfamiliar to most American readers, but so important in creating the world we live in.

After sending Cobb to Mexico during their civil war and Wilson’s invasion of Vera Cruz in The Hot Country, and then to wartime Europe in The Star of Istanbul, this newest adventure places Cobb in a London under siege from bombardment by Germany’s zeppelins.

Now working outright as a spy for the U.S. government, the intrepid Cobb is assigned to investigate suspected treason by a British baronet of German ancestry. The twist this time is that his partner in the mission is his own mother, the famous stage actress Isabel Cobb.

Butler, who won a Pulitzer Prize for his short-story collection A Good Scent from a Strange Mountain, writes prose that is at once tight and fluid, disciplined in a way that clears all obstacles for the reader. His vivid descriptions of London and wartime Germany are as atmospheric as anything by Alan Furst, but without the murkiness.

The first-person narration by Kit, as Cobb is known, reveals a sympathetic if volatile protagonist who is often ambivalent about his role as a spy.

This self-doubt comes to a head when he is pitted against German soldiers, whom he admires for their bravery and integrity despite a mission that puts them all on a collision course.

In this book, too, Cobb faces the delicate issue of working with his mother. Butler pulls off the challenging task of how an adult son deals with his parent’s love life without being cloying or descending into dangerous Oedipal territory.

Isabel Cobb is involved, in fact, because the suspected baronet, Sir Albert Stockman, is a big fan of hers, and his seduction is part of the Cobbs’ mission to unmask him.

Their investigation leads them to follow Stockman from his estate on the Dover coast to Berlin and then to the zeppelin air bases in western Germany to find out his deadly secret.

With Kit posing as a German-American journalist sympathetic to the German cause in the war — America did not enter the conflict until later — both Cobbs develop a relationship with Stockman that keeps him from being just a two-dimensional villain.

Butler expands the confines of the thriller genre to illuminate the ambiguities of war, the good in evil, and the evil in good.

There is never a question in Kit’s mind as to which side he is on, and no amount of doubt hinders him in completing his mission. But war, treachery, and espionage inevitably pose some moral dilemmas.

Butler established his literary reputation as a Vietnam veteran who could depict the moral ambiguity of that conflict. He also comes from a theatrical heritage and studied theater himself, so he brings a lot of authority to his narrative.

The plot moves along at a good pace, though there is perhaps a bit too much second-guessing of a look, a smile, a slip of the tongue. There is some busyness that could also have been cut — this 400-page book might have been better if it were 50 pages shorter.

Also, unaccountably, Butler likes to dwell on his characters’ smoking, which may be part of creating period authenticity, but which would not have been missed had there been less of it.

Butler has some fun bringing the young Albert Einstein into the picture as a German-Jewish scientist disaffected with his native country, but enduring it — and being endured by the Berlin establishment — for the sake of his research.

Einstein supplies a critical clue to Kit in unraveling the mystery behind Stockman’s secretive dealings in Germany.

As with those set in England, every detail of the scenes in Germany rings true, immersing the reader in a credible and authentic narrative from start to finish.

Not least, the focus on zeppelins enhances the sense of adventure, as these massive airships never fail to capture the imagination. While films from “Indiana Jones and the Last Crusade” to “The Rocketeer” depict the Nazis’ use of zeppelins, they were a novel factor in the earlier war, as well.

This is the drama Butler brings to life so vividly in this newest Cobb thriller, making it a satisfying read for any fan of the genre.

About the Author
Robert Olen Butler is the Pulitzer Prize-winning author of over a dozen novels, including Hell, A Small Hotel, and two previous installments of the Christopher Marlowe Cobb series, The Hot Country and The Star of Istanbul. He is also the author of six short collections and a book on the creative process, From Where You Dream. He has twice won a National Magazine Award in Fiction and received the 2013 F. Scott Fitzgerald Award for Outstanding Achievement in American Literature. He teaches creative writing at Florida State University.

Be the first to review “The Empire of Night” Cancel reply