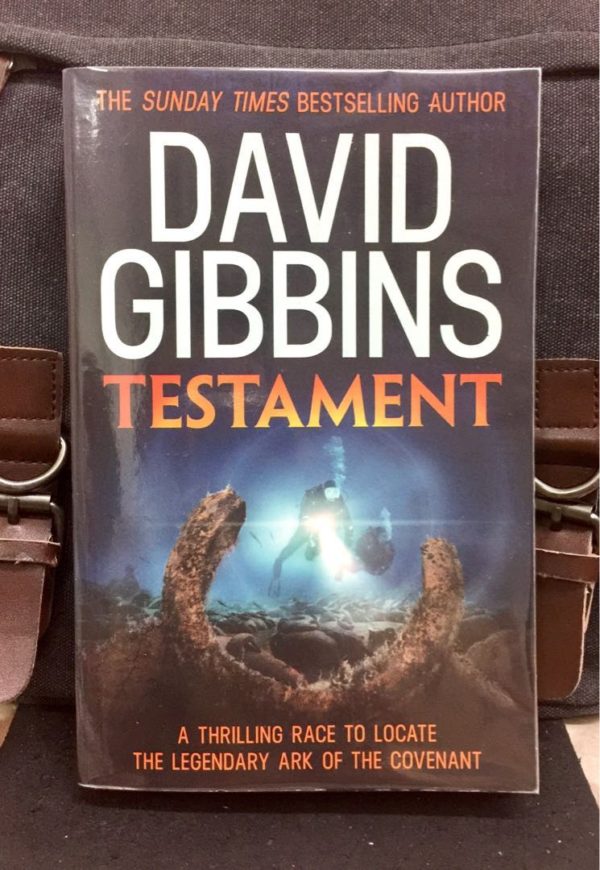 Looptail : How One Company Changed the World by Reinventing Business

This Sunday Times Bestselling author’s novel in paperback edition is a bran-new book and nicely wrapped with protective book-wrapper. The original new book is sold at usual price RM71.91. Now here Only at RM13.

From the author of the bestselling ATLANTIS comes a thrilling novel of buried secrets, age-old mysteries and a conspiracy surrounding the fabled Ark of the Covenant.

‘What do you get if you cross Indiana Jones with Dan Brown? Answer: David Gibbins’ Mirror

585 BC The ancient world is in meltdown. The Babylonians have ravaged the Holy Land, and Jerusalem has fallen.

In desperation the priests of the Temple look to the greatest navigators the world has ever known to save their treasures, to take them to places of concealment where they will await the time of revelation.

On a far distant shore, after a voyage more astonishing than any ever undertaken before, a Phoenician named Hanno flees for his life from a terrifying enemy, hoping against hope that his extraordinary cargo will reach the mountain fastness in time, the place the prophets called the Chariot of Fire …

1943 In the darkest days of the Second World War, Allied codebreakers play a game of life and death with merchant shipping and Nazi U-boats in the north Atlantic.

For a select few under the direct command of Churchill, the stakes are even higher, a top-secret exchange of deadly materials between the Nazis and the Japanese that must be stopped at all costs. Yet even they know nothing of the ancient artefact hidden on board a ship whose fate they have just sealed …

Present-day Marine archaeologist Jack Howard and his friend Costas undertake one of the most perilous dives of their lives, hunting for Nazi gold in a wreck perched on the edge of the continental shelf.

What they glimpse there, in the moments before a cataclysm that nearly destroys them, sets Jack on one of the most extraordinary trails he has ever followed – to a Phoenician shipwreck off England, to a Second World War codebreaker with an amazing story to tell, to the ruins of ancient Carthage – where Jack’s colleague Maurice Hiebermeyer has made one of the most bizarre discoveries of his career – and to the account of a Victorian expedition against a mad king in the mountains of Ethiopia.

He pieces together the truth of one of the greatest ancient voyages of discovery, one whose true purpose he could scarcely have imagined.

Yet none of that can prepare Jack for the shocking modern-day reality he encounters when he seeks the prize – in a place of desolation where life is worth no more than the value of a ransom, but where the quest leads him on another mission, to a deadly Nazi cargo that must be kept from the terrorists at all costs.

In a world where the shadow of war is as dark as it was when the Babylonians ravaged the land, Jack must fuse past and present as he never has done before in a terrifying final showdown where the future of humanity itself is at stake. .

David Gibbins is one of those authors who lives his books, in many ways he is Jack Howard, and because of this the books brim with passion and experience for the subject.

Jack Howard’s world has moved on from the catastrophic events in Pharaoh and Pyramid, No longer able to access Egypt he and his people continue to search for the next great discovery, mapping their discoveries and searching for the truth behind them and the great people of the past involved, where the ghosts of the past meet the present.

One of the greatest successes of this series for me is how the author creates links between ancient nations and the modern world, showing how none of them existed in isolation, how they traded, lived and expended their borders, how they interacted and lived and worshiped and how those echos live on today.

By this book Jack Howard has created a support team to cover all possible needs, be they translations of manuscripts, to engineering to diving and weapons expertise.

All of this the author manages to portray in a totally believable scenario, however fantastic the discovery may seem, the level of detail coupled with the keen eye for reality and research make for a book unlike others of its type and genre, it feels real.

Blending 4 time periods and time slipping to each gives a sense of immediacy and intimacy to each period and really makes the reader part of each moment of the tale and its importance in the over all story arc.

The part of the tale from ancient Carthage lends the story an epic and yet melancholy quality, but the determined approach from Jack Howard gives the reader the edge of the seat desire to see their achievements reach the light of day.

Testament is the latest in the Jack Howard series from David Gibbins, who uses his real world experience as an archaeologist to write thrilling historical novels.

David Gibbins knows his stuff: his history, archaeology, and his diving. He pieces these all together to create an incredible adventure for his readers. In this regard, he is second to none.

About the Author
DAVID GIBBINS is the New York Times bestselling author of several previous historical adventure novels that have sold over two million copies and are published in twenty-nine languages, including Atlantis, Crusader Gold, and The lost Tomb. He taught archaeology, ancient history and art history as a university lecturer, before turning to writing fiction full-time. He lives in London and Canada.

Be the first to review “Testament” Cancel reply