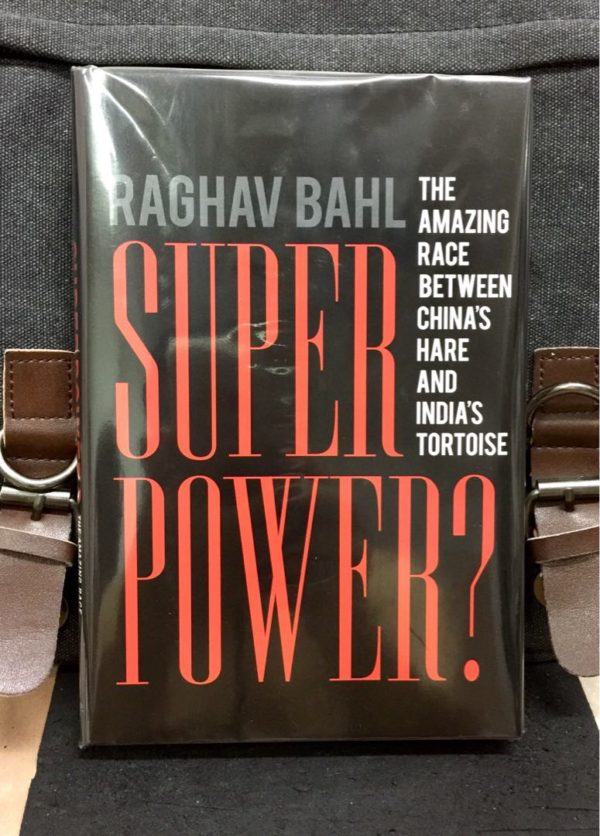 SUPERPOWER ? : The Amazing Race Between China’s Hare and India’s Tortoise

THE WISEST ONE IN THE ROOM : How To Harness Psychology’s Most Powerful Insights

IS INDIA READY FOR SUPERPOWER STATUS OR TOO FAR BEHIND CHINA TO EVER CATCH UP ?

India and China are the two of the greatest emerging economies world is witnessing today. Ever wondered what we know about the two countries?

● What point of inflections happened due to which both of these economies differed?

● What past decisions by both the countries have carved the today’s economies?

● What things are currently happening in these two economies?

● What will be their role in shaping the future? How will they do it?

● Is India ready for superpower status or too far behind China to ever catch up?

In his career as one of India’s leading journalists and entrepreneurs, Raghav Bahl has often faced this question, and many others, from bewildered visitors:

● Why are Indian regulations so weak and confusing?

● How come your hotels are world class, but the roads leading to them are so potholed?

●Why don’t you lower your voice when you make fun of your politicians?

● Why do you control the price of oil and cable TV?

Clearly there’s a huge difference in how India and its arch-rival China work on the ground. China is spectacularly effective in building infrastructure and is now reinvesting almost half its GDP.

Meanwhile, India is still a “promising” economy: more than half its GDP is consumed by its billion-plus people, yet India has some unique advantages: Half its population is under twenty-five, giving it a strong demographic edge; 350 million Indians understand English, making it the largest English-speaking country in the world; and it’s the world’s largest democracy.

In the race to superpower status, who is more likely to win: China’s hare or India’s tortoise? Bahl argues that the winner might not be determined by who is investing more and growing faster today but by something more intangible: who has superior innovative skills and more entrepreneurial savvy.

He notes that China and India were both quick to recover from the financial crisis, but China’s rebound was accompanied by huge debt and deflation, with weak demand.

India’s turnaround was sturdier, with lower debt and modest inflation. So India’s GDP grew twice as fast as China’s for a few quarters-the first time that had happened in nearly three decades.

And in contrast to China’s Yuan, which is pummeled for being artificially undervalued, India’s rupee largely floats against world currencies. In the end, it might come down to one deciding factor: can India fix its governance before China repairs its politics?

With insights into the two countries’ histories, politics, economies and cultures, this is a well-written, fully documented, comprehensive account of the race to become the next global superpower. For anyone looking to understand China, India and the future of the world economy, this is the book to read.

While his book’s title is posed as a question, Bahl, who credits himself with helping to bring such American media brands as CNBC, CNN, MTV, and Forbes into India, is clearly arguing India’s case as a superpower counterpart to its “non-identical twin,” China.

Bahl openly admires China’s white-hot pace of development and its seemingly unlimited financial reserves, but he points to India’s resilient democratic institutions, its relatively young population (median age: 25.3), and its fiscal prudence in resisting the economic forces that ultimately devastated so many of the world’s economies in September 2008.

Bahl’s cheerleading for India can wear thin, and he does not address such mitigating issues as India’s conflict with Pakistan and the possible environmental damage of a more developed India. Still, his book will clear up a lot of misperceptions about the nature of his country’s socioeconomic path.

The book gives a very comprehensive view of both of these economies and takes you on a ride right from the early independence days till now and somewhat gives a glance of future of these economies. An amazing read for beginners particularly the ones who are treading into economics just now. Will be an eye opener for many people who don’t clearly know how the businesses are done in both these economies. Supplement it along with some documentaries and TED talks and you can broaden your horizon.

Bahl, founder and managing director of India’s largest TV news network, compares the superpower prospects of India and China in this meticulously researched but unevenly written study. Contrasting their foreign and domestic policies, cultures, and geographies, Bahl measures their potential for economic growth.

Though China doubles its economy every eight years and “spends billion every day to develop world class infrastructure,” India has its own advantages: it is the world’s largest democracy, 350 million of its people speak English, half its population is under 25, and it boasts a “robust judicial system.”

Furthermore, India impressed the world with its resilience to the global economic crisis, rebounding with modest inflation, while China experienced deflation and a huge debt. But Bahl warns that India’s dithering government could obstruct its potential, lamenting its failure to improve India’s crumbling infrastructure while China’s “democratic dictatorship” could stymie growth by discouraging innovation.

Though the book offers valuable insights into the motivations of the world’s two most populous countries, it could have been more tightly edited to eliminate repetition, clichés, and some awkward–occasionally bombastic–phrasing (“India’s macroeconomics was beginning to allure”).

About the Author
Raghav Bahl is the founder, controlling shareholder and managing director of Network 18, India’s largest television news and business network. It broadcasts content from CNN and CNBC and also publishes Forbes India. Bahl has negotiated joint ventures with U.S. media giants such as NBC Universal, Viacom, Time Warner and Forbes. In just seventeen years since its creation, Network 18 has grown its market capitalization to more than $750 million.

Among his many honors, Bahl was hailed as a Global Leader of Tomorrow by the World Economic Forum and selected by Ernst & Young as Entrepreneur of the Year for Business Transformation in 2007.

Be the first to review “SUPERPOWER ? : The Amazing Race Between China’s Hare and India’s Tortoise” Cancel reply