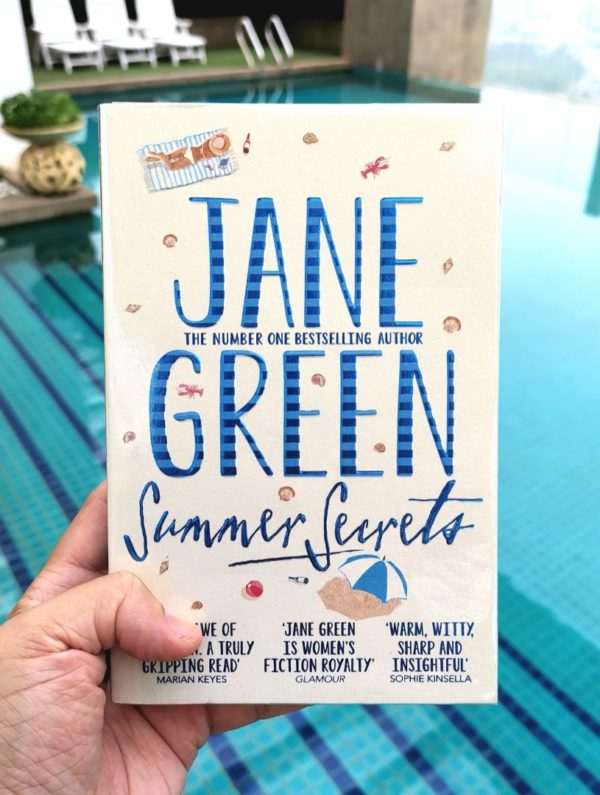 Told with Jane Green’s keen eye for detailing the emotional landscape of the heart, Summer Secrets is at once a compelling drama and a beautifully rendered portrait of relationships, betrayals, and forgiveness.

Cat was living the party life in London, drinking and partying every night. Everything changes for the 20-year-old when she discovers that the father she never knew was living in Nantucket.

Now in her 30s, Cat is sober, but divorced and desperately trying to make up the time she lost with her daughter.

Cat is forced to face the past and the fateful events of one summer night many years ago. Cat learns that confronting the events will impact her future in ways she could have never imagined.

When a shocking family secret is revealed, twenty-something journalist Cat Coombs finds herself falling into a dark spiral.

Wild, glamorous nights out in London and raging hangovers the next day become her norm, leading to a terrible mistake one night while visiting family in America, on the island of Nantucket.

It’s a mistake for which she can’t forgive herself. When she returns home, she confronts the unavoidable reality of her life and knows it’s time to grow up.

But she doesn’t know if she’ll ever be able to earn the forgiveness of the people she hurt.

As the years pass, Cat grows into her forties, a struggling single mother, coping with a new-found sobriety and determined to finally make amends.

Traveling back to her past, to the family she left behind on Nantucket all those years ago, she may be able to earn their forgiveness, but in doing so she may risk losing the very people she loves the most.

Jane Green delivers her second blockbuster novel of 2015, a story of one woman struggling to right the wrongs of her past, with even more complications in the present.

June, 1998: At twenty seven, Catherine Coombs, also known as Cat, is struggling. She lives in London, works as a journalist, and parties hard.

Her lunchtimes consist of several glasses of wine at the bar downstairs in the office, her evenings much the same, swigging the free booze and eating the free food at a different launch or party every night.

When she discovers the identity of the father she never knew she had, it sends her into a spiral. She makes mistakes that cost her the budding friendship of the only women who have ever welcomed her. And nothing is ever the same after that.

June, 2014: Cat has finally come to the end of herself. She no longer drinks. She wants to make amends to those she has hurt. Her quest takes her to Nantucket, to the gorgeous summer community where the women she once called family still live.

Despite her sins, will they welcome her again? What Cat doesn’t realize is that these women, her real father’s daughters, have secrets of their own.

As the past collides with the present, Cat must confront the darkest things in her own life and uncover the depths of someone’s need for revenge.

Catherine Coombs, a.k.a, Cat, a British woman, loves her English life style and her job as a journalist, as she can indulge herself in free booze either during the lunch times or in some launch events.

And one sudden day, she learns the truth behind the identity of her real father and how she got the genes of alcoholism into her. And that summer destroys quite a few blossoming family bonds of Cat because of her drinking problem and throws her into a downward spiral.

Few years down the line, Cat has realized that she has lost everyone she loved because of her alcoholism, her family, her husband, the custody of her children, her new family, and she is ready to make amends for the troubles and pain that she have caused in the lives of those people. Will she be forgiven? Will she finally give up her drinking?

This is the first ever time that I read anything by this author, since I’m not much of a contemporary women’s fiction fan, and surprisingly this book held me right at the very start and kept me gripped pretty much all the time, till the very end.

The best part of this women’s fiction book is that the characters are believable and their problems are genuine and so their demeanor thus making the story rather realistic.

Although a women’s fiction never fall short in projecting some stereotypical characters, Jane Green’s book too featured some cliched characters and highly fictional moments which are often cheesy and mostly vague.

The author’s writing style is is eloquent and charming that will make the readers comprehend better with the story line.

Also the prose is made emphatic as well as poignant by the author which will help the readers to feel for the characters and their stories.

The narrative is emotional yet entertaining and often light-hearted, making sure that the readers will not only shed a drop of tear or two, but will also have a good laugh. The pacing is really swift as the author unravels the story gradually through layers and with through depth.

The characters from the book are well-etched out from realism and are made very striking. The main character, Cat, is a flawed to the core human being, whose drinking problem is the center of this story line, her downfall is vividly arrested by the author with sensitivity and care, only to make sure that the readers feel sympathetic towards this character.

The only sad part is that the readers will fail to find where this woman found any strength or solid resolution to put an end to her drinking problem, because AA meetings are not the only solution to cure a person from his/her drinking problems. The rest of the characters are kind of okay.

In a nutshell, the story is captivating and is perfect for a beach read as the story is light, funny, summery, sassy and equally evocative.

Before sobriety, Catherine “Cat” Coombs had it all: fun friends, an exciting job, and a love affair with alcohol. Until she blacked out one more time and woke up in a stranger’s bed.

By that time, “having it all” had already devolved into hiding the extent of her drinking from everyone she cared about, including herself.

Luckily for Cat, the stranger turned out to be Jason Halliwell, a rather delicious television director marking three years, eight months, and 69 days of sobriety.

Inspired by Jason—or rather, inspired by the prospect of a romantic relationship with this handsome hunk—Cat joins him at AA meetings and embarks on her own journey toward clarity.

But sobriety won’t work until Cat commits to it for herself. Their relationship is tumultuous, as Cat falls off the wagon time and again.

Along the way, Cat discovers that the cold man she grew up endlessly failing to please was not her real father, and with his death, her mother’s secret escapes.

So she heads for Nantucket, where she meets her drunken dad and two half sisters—one boisterously welcoming and the other sulkily suspicious—and where she commits an unforgivable blunder.

Years later, despairing of her persistent relapses, Jason has left Cat, taking their daughter with him.

Finally, painfully, Cat gets clean. Green (Saving Grace, 2014, etc.) handles grim issues with a sure hand, balancing light romance with tense family drama. She unflinchingly documents Cat’s humiliations under the influence and then traces her commitment to sobriety.

Simultaneously masking the motivations of those surrounding our heroine, Green sets up a surprising karmic lesson.

As she seeks to repair bridges, Cat awakens anger and treachery in the hearts of those she once betrayed. Making amends, like addiction, may endanger her future.

About the Author
JANE GREEN is the author of more than a dozen bestsellers, including Jemima J, Mr. Maybe, and The Beach House. Originally from London, she now lives in Westport, Connecticut, with her husband, children, and a menagerie of animals.

Be the first to review “Summer Secrets” Cancel reply