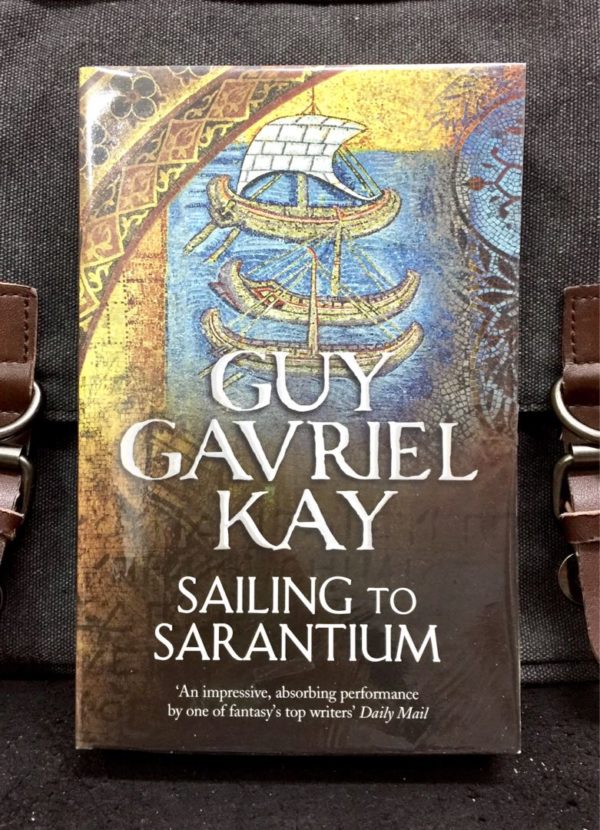 Nujeen : One Girl’s Incredible Journey from War-Torn Syria in a Wheelchair

The Sarantine Mosaic is a historical fantasy duology by Canadian writer Guy Gavriel Kay, comprising Sailing to Sarantium (1998) and Lord of Emperors (2000). The titles of the novels allude to works by poet W. B. Yeats.

The story’s setting is based on the 6th century Mediterranean world, and the looming conflict between the Eastern Roman Empire and the Ostrogothic kingdom of Italy that had replaced the Western Roman Empire. Varena, the capital of Batiara, alludes to Ravenna, the Ostrogothic capital, while Sarantium, the capital of Trakesia, is inspired by Byzantium or Constantinople.

Sailing to Sarantium, the first novel in the saga, was published in 1998. In this novel, mosaicist Caius Crispus (“Crispin”), is summoned from Varena to the great metropolis of Sarantium to create a mosaic for Emperor Valerius II, (modelled on Byzantine emperor Justinian I).

Crispin has lost his family to plague, and has nothing left to him except his mosaic art, for which he is earning attention.

The narration follows his travels from the relatively civilized Batiara through the wilder region of Sauradia, where he has an encounter with a creature of supernatural aspect resembling an aurochs, to Sarantium itself and his compelled entrance into the politics of the metropolis, centred on Valerius and his consort, the Empress Alixana (modelled on Justinian’s empress, Theodora).

While Crispin is a central focus of the book, there are other stories interwoven with his. Overcoming loss (loss of family, loss of the past), rebuilding (life, civilization), journey as change and the importance of art to the individual creator and to civilization itself are themes of the novel.

The title and much of the thematic development alludes to the poem Sailing to Byzantium, a work of the Irish poet William Butler Yeats.

Emperor Apius of Sarantium dies without any heirs leaving the empire in uncertainty. Petrus of Trakesia plans to have his uncle, Valerius of Trakesia the Count of the Excubitors (Imperial Guard), become the next emperor. He plants is own men among the different factions to try, and purposely botch, an attempt to have them support Flavius Daleinus, a rich and influential aristocrat with plans of himself to become emperor, thus discrediting Flavius name.

At the same time, and also ordered by Petrus, Flavius is murdered on the streets with Sarantium fire while donning porphyry, colour exclusive to royalty, and his eldest son is left hideously burned. Valerius is then appointed as the new Emperor by popular demand.

Fifteen years later, Petrus has succeeded his uncle, naming himself Valerius II and making Alixana, formerly Aliana, his empress. Valerius II commissions a great sanctuary for Jad and summons Martinian of Batiara, a renowned mosiacist, to decorate it.

The royal request is sent with Pronobius Tilliticus, an Imperial Courier, who delays delivery of the message while pursuing personal pleasure along the road. Martinian, partially on whim and partially believing himself too old to travel, causes Tilliticus to mistake his friend and colleague Caius Crispus (“Crispin”) of Rhodias for him, delivering the message in a public fashion.

Crispin is reluctant to accept the prestigious summons, having lost the desire to live when his wife and two daughters died of the plague the previous year. Having taken too long receive the summons, the season no longer allows Crispin to Sail to Sarantium; he must take the road. Martinian sends Crispin to talk to his old and well-traveled friend Zoticus for advice on his journey.

Zoticus reveals himself to have some supernatural powers and gives Crispin a mechanical bird, Linon, that is alive, being able to both talk to him aloud and within his mind.

He also gives Crispin the name of his daughter and another person in Sarantium who may be able to help him.

The night before he is to leave, Crispin is forcibly abducted and taken to Gisel, the queen of the Antae and ruler over Batiara and Rhodias, who is barely holding onto her throne and life after the recent death of her father.

She gives Crispin a secret message to be given only to Emperor Valerius II: an offer of her hand in marriage, which would save her life and give Valerius the western kingdom. The palace guards from that night are killed to protect the secret.

Crispin starts his journey under the assumed identity of Martinian, hiring Vargos as his man servant. The night before the Day of the Dead, during which Zoticus warned him not to travel, Crispin arrives at an inn where a slave girl, Kasia, begs him to save her, having figured out she is to be given as a human sacrifice to the pagan god on the Day of the Dead.

Despite devising an ingenious plan that forces the innkeeper to give him ownership of Kasia, the group are still pursued as they leave the inn, deeming it necessary to travel on the Day of the Dead despite all warnings.

They are saved by a zubir, a corporeal representation of the pagan god, which then brings them to the forested area where the human sacrifices are performed. Linon realizes the god wants only her, revealing that she was a girl to be sacrificed to the god long ago but her soul was saved and placed in the bird by Zoticus. She sacrifices herself, releasing her soul from the bird, and allowing the others to leave unharmed.

While admiring an old and impressive mosaic in a sanctuary along the road, the commander Carullus with his men find Crispin; he has been sent by Valerius due to extended time it has taken to respond to the Emperor’s summons.

After an initial rough encounter, resulting in Crispin being knocked unconscious by Carullus and Vargos and Kasia almost being raped and killed, the group slowly become friends as they finally arrive in Sarantium.

Shortly after arriving, Crispin is immediately summoned to the Emperor and the court, at a speed that is unheard of in the empire. Risking his life, Crispin reveals his true identity only to find out that the Emperor and Empress knew his and Martinian’s deception from the beginning.

Crispin quickly finds favour with them, causing the royal mosiacist to be dismissed and angering his sponsor, Styliane Daleina, the daughter of the murdered Flavius Daleina and new wife of Leontes, the beloved royal Strategos.

The Emperor gives Crispin the honour of decorating the newly erected sanctuary, and Empress Alixana publicly invites Crispin for a private audience later that night.

Crispin’s private audience with the Empress is interrupted by the Emperor and the two reveal that they know of Gisel’s secret offer of marriage, while Crispin neither confirms or denies the message.

It becomes clear that the Emperor will not put aside his beloved though barren wife – an assumed consequence of her former life as a dancer – but informs both that he had long since summoned the queen to Sarantium, where he plans to use her as an excuse to invade the west and reunite the kingdoms under his rule.

The Emperor then brings Crispin to the sanctuary to show him where he is to work, before leaving him under the protection of Carullus to return home.

While returning home, Crispin is attacked by assassins, but survives due to the help of Carullus and the famous and beloved Scortius of the blues, the most beloved charioteer of the city.

Crispin returns to his room only to find Styliane Daleina there; she throws herself at him and is amused when he rejects her advances.

The next day, while relaxing in a bath house, Crispin finds himself alone with Leontes, the latter having arranged it to discuss his views on the blasphemy of depicting Jad in human form.

Before leaving, Leontes exposes another armed assassin entering the sauna, giving Crispin just enough time to overcome his attacker while looking on and refusing to help.

Crispin makes contact with Zoticus’s daughter, Shirin, who is revealed to also have one of her father’s birds whose thoughts Crispin is able to also hear for unknown reasons. With the help of Vargos, it is learned that the assassins were hired by Pronobius Tilliticus as revenge for losing his job when Crispin indirectly revealed his inappropriate and disloyal services.

With the help of Zoticus, Gisel is able to escape attempts on her life and journeys to Sarantium. Zoticus, upon learning that the pagan god had not forgotten nor relinquished his right to the souls of the human sacrifices given to him, journeyed to the forested area where Linon had sacrificed herself to the zubir.

There he allows the remaining souls in his mechanical birds to be released back to the god and accepts his death from the zubir, a punishment from taking the souls of the sacrificed woman in the first place.

Crispin further entwines himself into court life and finds reason to continue living through his task of decorating the great sanctuary, through which he sees a chance of immortality. The book ends with an unknown female figure entering the sanctuary while Crispin is working, irresistibly drawing him down to greet her.

Be the first to review “Sailing To Sarantium” Cancel reply