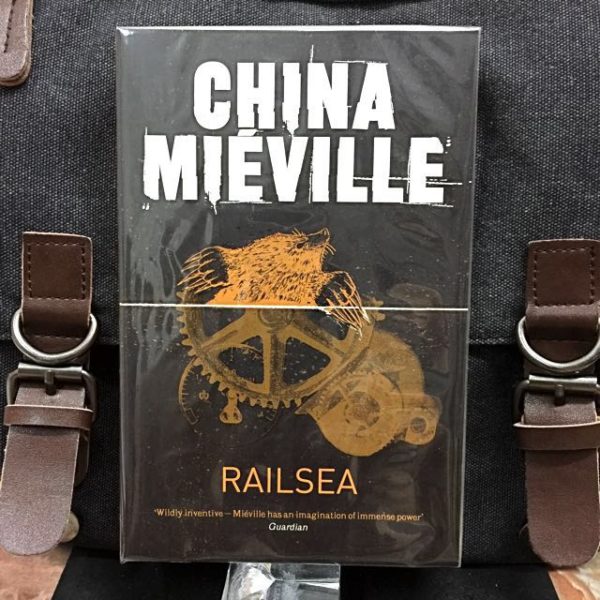 Get the Truth : Former CIA Officers Teach You How to Persuade Anyone to Tell All

Game Over : Would She ever meet a more worthy opponent?
China Mieville
Brand-new, Paperback

This young adult bestselling novel in paperback is a bran-new book and the original new book is sold at usual price RM41.50. Now here Only at RM12.

Railsea is a young adult novel written and illustrated by English writer China Miéville, and published in May 2012. Miéville described the novel as “weird fiction”,it was labelled its mix of fantasy and steampunk elements as “salvagepunk”and the story has been seen as an “affectionate parody” of Herman Melville’s classic novel Moby-Dick,also drawing on Robert Louis Stevenson’s adventure novels Treasure Island and Kidnapped.

Sham Yes ap Soorap is a young assistant doctor on a moletrain, captained by Abacat Naphi, that hunts giant moles for meat in a similar fashion to whaling.

Naphi is especially obsessed with one mole named Mocker-Jack and after one encounter, they discover an abandoned train. Sham enters it, discovering a corpse and a camera buried in the ground. Sham and Naphi view the images and are shocked to see an image of a single rail leading off into the distance, an apparent impossibility as it is believed that the railsea is endless.

As rumours spread of Sham’s discovery, his investigations lead him to Caldera and Dero Shroake. They are the son and daughter of two explorers who ventured to the furthest reaches of the railsea before disappearing. Sham tells them of the content of the camera, and they resolve to retrace their parents steps aboard their own train. Sham returns to the moletrain. Before it departs, he is captured by pirates who demand that he provide them with instructions as to how to reach the Shroakes as they believe that there is treasure to be found beyond the railsea.

After receiving a message from Sham, Naphi reluctantly abandons the chase for Mocker-Jack and sets out to find him. Sham convinces his former trainmates to assist the Shroakes, who are being sought by both pirates and the navy. They rescue them from their now almost incapacitated train and with a navy wartrain in close pursuit, venture out onto the lonely rail leaving the sea behind them. After a three way confrontation between the navy, Mocker-Jack and a robotic sentinel train that guards the exit of the railsea, the mole train escapes and Mocker-Jack falls into a chasm.

The moletrain crew decide to return with their valuable salvage to the known world, whilst Sham and the Shroakes press on by foot to see what lies beyond. They are joined by Naphi, who is now directionless following the death of Mocker-Jack. They reach the end of the line and find the ancient descendants of the railway controllers, confirming an ancient rumour; that the seemingly endless complexity of the railsea is nothing more than the result of rampant rail development by unscrupulous developers in the distant past. After reaching an ocean they take a boat, left by the Shroake’s parents, and sail out into the unknown.

On board the moletrain Medes, Sham Yes ap Soorap watches in awe as he witnesses his first moldywarpe hunt. The giant mole bursting from the earth, the harpoonists targeting their prey, the battle resulting in one’s death & the other’s glory are extraordinary.

But no matter how spectacular it is, travelling the endless rails of the railsea, Sham senses that there’s more to life. Even if his captain can think only of her obsessive hunt for one savage mole.

When they find a wrecked train, it’s a welcome distraction. But the impossible salvage Sham finds there leads to trouble. Soon he’s hunted on all sides: by pirates, trainsfolk, monsters & salvage-scrabblers. & it might not be just Sham’s life that’s about to change. It could be the whole of the railsea.

Once again, Railsea is a young adult oriented delight. It is like all Mieville novels in that it is tough to put it in a category. It is part fantasy, part dystopian, a smattering of steampunk and science fiction, and all Mieville. Parents can take delight knowing that if their child takes up this amazing piece of fiction, they will also be taking up the Webster dictionary.

Mieville creates a fun and three dimensional cast of characters and side characters. The world building in this book is imaginative and top notch. The plot is a combination of a coming of age story of a boy named Sham, a search for a captains “Moby Dick”, and the endless pursuit of the great treasure that all thieves are searching for.

The dystopian world of the Railsea that Mieville has created is worth the read alone. It takes place in a world that has become poisoned, the upper atmosphere is unbreathable, the land itself is dead, and the world is filled with incredibly inhospitable fauna. I felt like I was reading a book in a world filled with Graboids from one of my favorite B-movies Tremors. It feels a bit like a post apocalyptic Moby Dick. Trains crossing a land covered in iron tracks, crossing dry and dead lands, passing by derelict machines, and unearthed salvage where one might finally strike it rich. Mieville’s prose painted this landscape in a way that made me feel like I was there. He makes it all work at a new level by turning railway terminology into a completely new nautical one. The worms breach the surface of the ground and flop back down the same way that a whale does in the sea. The rail-people cast their fishing lines a stern in hopes to get the catch of the day. The penguins … Rocked… Literally! The trains moved like giant ships a sea, across the vast and derelict landscape.

The amazing creatures that filled the pages were all earth adapted versions of creatures that we know today. Think about the world of The Flinstones, where they had creatures that they called rock this and rock that. Burrowing owls, digging rats, beetles as big as a car, and worms the size of the trains themselves. The poisoned uppersky was filled with freak show twisted and mutated creatures. One such giant was reminiscent of a horror out of Stephen King’s The Mist and I thought that it was freaking sweet. Mocker-Jack, captain Nephi’s white whale, was a massive worm that was bone colored and had a house sized mouth that was filled with razor sized teeth. There are many other amazing creatures to,be discovered in this book.

Sham is a good young adult protagonist that goes through all the familiar coming of age story plot points. He befriends my second favorite character, his cool Daybat friend that he saves and names Daybe. Together they take us the reader on a magical and unforgettable journey. Across the great Railsea aboard their moler train, they search out legends and treasures. It is a fantastical ride that will be enjoyed by readers of all ages. Mieville paints the Railsea with almost as much detail as he does his pinnacle achievement the city of New Crobuzon from Perdio Street Station.

The book is paced at lightning speed. There are not really any major twists or turns to speak of, but that is alright too. The book has an amazing ending that really brought together the themes behind this gem. I would have loved it to be twice as long.

Be the first to review “Railsea” Cancel reply