Shop - Plan D : Imagine A World In Which The Berlin Wall Had Never Fallen. 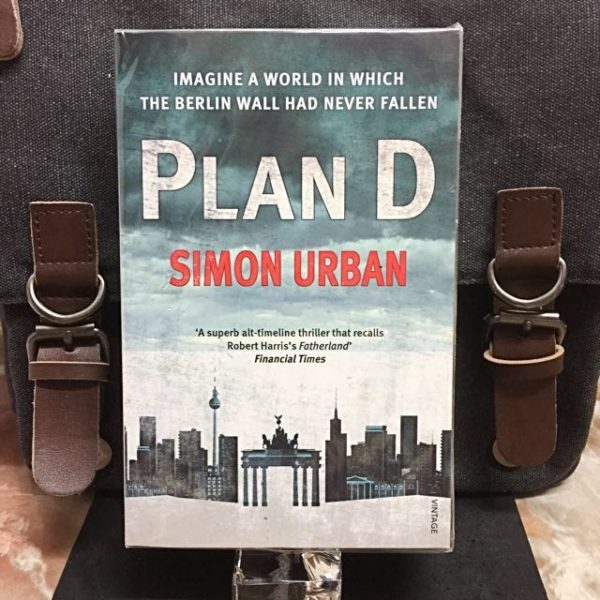 Plan D : Imagine A World In Which The Berlin Wall Had Never Fallen.

This Financial Times bestselling thriller in paperback is a bran-new book and the original new book is sold at usual price RM72.85. Now here Only at RM12.

Imagine a world in which the Berlin Wall never fell.

A detective who must catch a killer – and safeguard the future of his country.

October 2011. While West Berlin enjoys all the trappings of capitalism, on the crowded, polluted, Eastern side of the Wall, the GDR is facing bankruptcy.

The ailing government’s only hope lies in economic talks with the West, but then an ally of the GDR’s chairman is found murdered—and all the clues suggest that his killer came from within the Stasi.

Detective Martin Wegener is assigned to the case, but, with the future of East Germany hanging over him, Wegener must work with the West German police if he is to find the killer, even if it means investigating the Stasi themselves. It’s a journey that will take him from Stasi meeting rooms to secret prisons as he begins to unravel the identity of both victim and killer, and the meaning of the mysterious Plan D.

Inspector Martin Wegener of the East German People’s Police faces another day dividing his mind between thoughts of his luscious ex-lover Karolina and work. On this particular day ‘work’ is a body found hanging from the GDR section of gas pipeline that joins Russian to Europe. Not only is he hanging, the deceased has eight knots round his neck and his shoe laces are tied together: a Stasi trademark. Who is he and why are the Stasi killing again? Martin needs answers and they’re sending a West Berlin detective in to help him find them; not the best start to a day.

German author Simon Urban and his translator, Katy Derbyshire, treat us to a detective with a difference in Martin Alfons Wegener. He’s intelligent but life kind of happens to him and seems to be continually waiting in the wings to worsen his plight. Is he downhearted? No, he merely takes it in his stride and struggles on and I love him for it. We’re on his side from the beginning, sympathising as he talks about his much-missed late parents and his much-missed all too present Karolina while coming to grips with his boss, his country’s dictatorship, his job and his new ally, the suave, accomplished but totally likeable Richard Brendel.

Wegener’s East Berlin is as monochrome as his life with few consumer goods offering respite unless you’re a high-ranking party official. It’s much as I remember real-history East Berlin from the news and current affairs programmes of my youth except, of course, the technology is better in the alt-hist as time has moved on. Party slogans appearing daily on self-changing billboards is just one of the many lovely touches and the fact that the Party chose to use one of Margaret Thatcher’s quotes as the ‘Economic Words of the Day‘ made me grin as much as it may make her spin.

The writing and translation is anything but monochrome. This isn’t a comedy and there are adult themes but the inadvertently inept Inspector is not without a great personal sense of humour, often at the expense of the government that pays him in addition to his charming self-deprecation.

There are also touches of background humour, like the name of the top brass’s house and even an unexpected belly laugh; I’d never have expected to nasally decant coffee over the phrase ‘involuntary unification’ before this novel but Simon made it happen.

The other thing that doesn’t seem to have changed is dependence on natural resources. Even in this modern day Eastern Bloc fuel is the new gold and provides a credible background crossing the fiction/non-fiction border.

‘Simon Urban has created an imaginative alternate landscape that is so absurdly believable I had to remind myself, occasionally, that it wasn’t the real world. Compulsive reading. I devoured it.’ Will Carver

About the Author
Simon Urban was born in Hagen in 1975. He studied German literature at the University of Munster, and creative writing at the Deutsches Literaturinstitut in Leipzig, and his short stories have earned him numerous prizes. He lives in Hamburg and Techau (East Holstein) and currently works as a copywriter for a leading German creative agency.

Be the first to review “Plan D : Imagine A World In Which The Berlin Wall Had Never Fallen.” Cancel reply