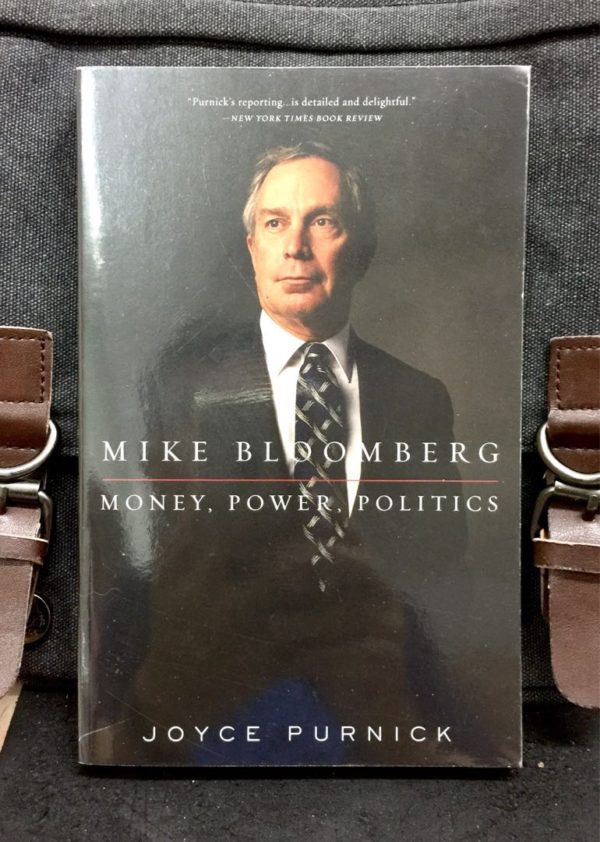 This New York Times bestseller in paperback edition is a bran-new book and nicely wrapped with protective book-wrapper. The original new book is sold at usual price RM82.97. Now here Only at RM16.

Michael Bloomberg is not only New York City’s 108th mayor; he is a business genius and self-made billionaire.

He has run the toughest city in America with an independence and show of ego that first brought him great successand eventually threatened it.

Yet while Bloomberg is internationally known and admired, few people know the man behind the carefully crafted public persona.

In Mike Bloomberg, Joyce Purnick explores Mr. Bloomberg’s life from his childhood in the suburbs of Boston, to his rise on Wall Street and the creation of Bloomberg L.P., to his mayoral record and controversial gamble on a third term.

Mike Bloomberg has repeatedly defied the standard models for success. He has never won a crowd over with his speaking prowess. Rooms do not hush with anticipation when he enters. Celebrity stalkers do not haunt him. But his unparalleled achievements drip with the dynamism that his public persona lacks.

His penchant for problem solving and impressive ability to chart his own path has led to his great success as a business genius, self-made billionaire, and influential mayor.

In this brilliant biography, former New York Times columnist and editor Joyce Purnick unravels this great American enigma from his childhood in the suburbs of Boston, to his rise on Wall Street and the creation of Bloomberg L.P., to his mayoral record and controversial campaign trail for a third term.

Drawing on her deep knowledge of New York City politics, and interviews with Bloomberg’s friends, family, colleagues, and the mayor himself, she creates a textured portrait of one of the more complex men of our era.

Mike Bloomberg’s story ranks as one of modern business and political history’s most inspiring and instructive tales. Take an average, middle-class man with uncommon vigor. Then, imbue him with the discipline and confidence to take maximum advantage of the great opportunities he encountered in college, Wall Street and, eventually, the electrified world of New York City politics. New York Times reporter Joyce Purnick’s fluid writing style makes this portrait of an ethical, tough, innovative leader flow seamlessly, so readers can easily enjoy and absorb its themes and stories.
————————————————–

The life of Michael Bloom­berg is full of fascinating, diverse elements that beg for a biographer’s attention. He isn’t just a two-term mayor of New York making a seemingly unstoppable bid for a third term next month. He is a former Salomon Brothers partner, sacked by that Wall Street firm in 1981, who got revenge by building a ­financial-data company that made him a multibillionaire. He has been an education reformer, a frisky presence on the social scene, a leading philanthropist and, in some of his chatter, an unreformed frat boy.

Bloomberg is “curt, profane, cranky and willful,” Joyce Purnick tells us at the start of her biography. Yet she also calls him “one of the most effective mayors in the city’s history.” So the big challenge for Purnick — a former columnist and metropolitan editor for The New York Times who has written about City Hall for more than 30 years — is to reconcile the many facets of the man.

The greatest strength of “Mike Bloomberg” is Purnick’s reporting, which is detailed and delightful. We hear from childhood friends who capture what it meant to be a restless young striver in Medford, Mass., in the late 1950s. We tag along for Bloomberg’s remarkably lucky first campaign, in 2001. His Republican bid to be mayor looked hopeless but somehow prevailed on the strength of his $74 million spending spree, his opponents’ missteps and the city’s turbulent mood after the Sept. 11 terror attacks.

We also get a cleareyed dissection of Bloomberg’s flirtation with a presidential bid in late 2007, when he appeared to be waiting for public entreaties to run. They never came. Purnick says she interviewed more than 400 people for the book (including Bloomberg seven times), and it shows.

But fitting it all together is maddeningly difficult. Purnick calls Bloomberg “stubbornly elusive” and “allergic to introspection.” Traits that seem to define him at one point in his life nearly vanish at another. All we are left with is what she describes as “Bloomberg’s Zelig-like ability to fit in, to make himself part of a new universe.”

A case in point: Purnick argues that the greatest spur to Bloomberg’s ambition came in college, when his father died at 57 without having achieved his life dreams. Yet when grieving families expressed worries that their loved ones’ remains might never be salvaged from World Trade Center debris, Purnick writes, “he told them coldly that he had only visited his own father’s grave once.” And he advised 9/11 survivors to “move on.”

In politics, a life of adaptability and quick change is better known as pragmatism. And Purnick gives Bloomberg high marks for being a pragmatic mayor. During his tenure, public schools have improved, crime rates have continued to decline, racial tensions have ebbed and brisker real estate development has helped the city’s finances. It may be that Bloomberg’s wealth makes it easier for him to do the right thing without worrying about offending powerful interests.

Bloomberg’s critics get their say here, but generally leave only minor nicks on his reputation. His lavish, self-financed campaigns annoy people who lack such resources. His maneuvering to knock down term limits so he can run for a third term doesn’t come off as especially noble. And the rise in school test scores may overstate progress a bit.

“He is not warm, beloved or glib in a profession that demands all three,” Purnick writes. A rocky third term could undo most of his accomplishments to date. Yet Purnick largely sees him as a lasting winner, able to bring technical competence and nonpartisan leadership into the messy world of city politics.

About the Author
Joyce Purnick a veteran New York reporter and editor, wrote the award-winning Metro Matters” column at The New York Times for ten years. She joined the paper in 1979, after writing at the New York Post and New York magazine, becoming the first woman to head the Times’s City Hall bureau and its Metro department. She has, so far, covered six mayors of New York. Ms. Purnick, a Barnard College graduate, lives in Manhattan with her husband and is the admiring stepmother of three and grandmother of six.