Shop - Messy : How To Be Creative And Resilient In A Tidy-Minded World 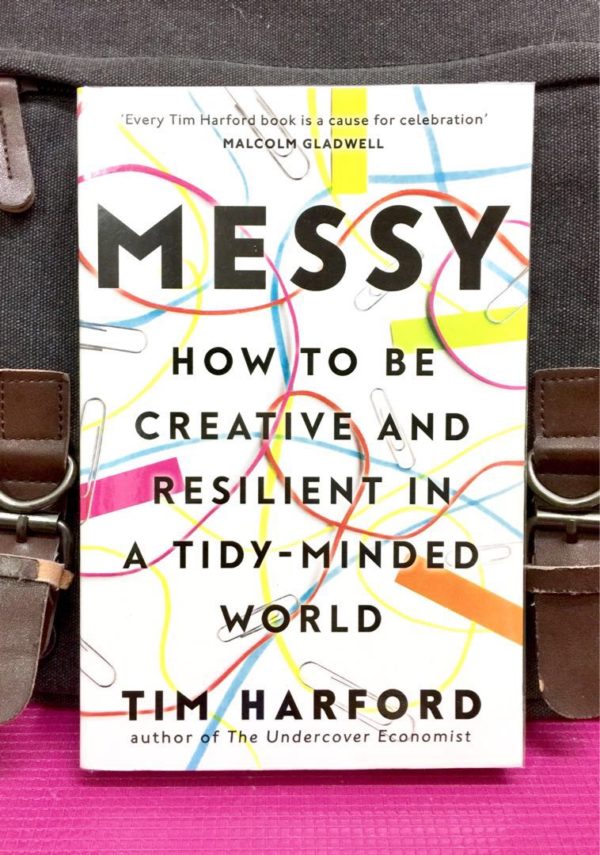 Messy : How To Be Creative And Resilient In A Tidy-Minded World

All The Rage : Buddhist Wisdom On Anger And Acceptance

How We Got to Now : Six Innovations That Made the Modern World
Tim Harford
BRAND NEW, PAPERBACK

How & Why The Power of Disorder Can Transform Our Lives

This New York Times / The Wall Street Journal / The Economist / Financial Times (FT) Bestseller in paperback edition is a bran-new book and nicely wrapped with protective book-wrapper. The original new book is sold at usual price RM79.90. Now here Only at RM28.

From the award-winning columnist and author of the national bestseller The Undercover Economist comes a provocative big idea book about the genuine benefits of being messy: at home, at work, in the classroom, and beyond.

Messy: How To Be Creative And Resilient in A Tidy-Minded World celebrates the benefits that messiness has in our lives:

why it’s important, why we resist it, and why we should embrace it instead.

Using research from neuroscience, psychology, social science, as well as captivating examples of real people doing extraordinary things, Tim Harford explains that the human qualities we value – creativity, responsiveness, resilience – are integral to the disorder, confusion, and disarray that produce them.

From the music studio of Brian Eno to the Lincoln Memorial with Martin Luther King, Jr., from the board room to the classroom, messiness lies at the core of how we innovate, how we achieve, how we reach each other – in short, how we succeed.

The book’s premise is simple: being neat and tidy isn’t the great virtue you’ve been led to believe, and being messy isn’t inherently a vice.

Over nine chapters, Harford explores the various dimensions in which our impulse to toward tidiness can get in our way, and for which a little messiness might be the cure.

Each chapter uses a central story or two as exemplars, with other stories and anecdotes providing support.

In Messy, you’ll learn about ：

● the unexpected connections between creativity and mess;

● understand why unexpected changes of plans, unfamiliar people, and unforeseen events can help generate new ideas and opportunities as they make you anxious and angry;

● and come to appreciate that the human inclination for tidiness – in our personal and professional lives, online, even in children’s play – can mask deep and debilitating fragility that keep us from innovation.

Stimulating and readable as it points exciting ways forward, Messy is an insightful exploration of the real advantages of mess in our lives.

“We’ve seen again and again that real creativity, excitement, and humanity lie in the messy parts of life, not the tidy ones.”

If you’ve ever wondered where people with empty desks keep all their work, you’re not alone.

Maybe the fault lay with our inability (or unwillingness) to adopt a system that allowed me to have such a neat workspace.

After all, we had things to do. Despite having than one book on how to organize your life, every year I seem to add “being tidier” to our New Year’s resolutions.

After reading Messy: The Power of Disorder to Transform Our Lives, you will feel relief.

There seemed to be a method behind this madness, after all. In fact, the opposite — automation — can be downright deadly (see the case of Air France flight 447 or even more recent examples of GPS systems leading drivers down dangerous snow-filled mountain roads in winter).

What the book really points up is that humans can function under chaos, much more so than one would expect.

Our inherent judgment capabilities mean that we can deal with mess, and sometimes even thrive. Indeed, chaos often leads to cutting-edge (creative) solutions.

Examples cited in the book range from jazz musicians to children’s playgrounds to thriving businesses like Amazon.

While operating in a state of messiness can often be uncomfortable, it can also be extremely productive, as Author Tim Harford illustrates.

This book is the un-road map to doing things the same old, “efficient” way. For anyone interested in the creative process or entrepreneurship, there’s a lot of food for thought here.

The book’s introduction sets up the idea by describing a famous concert in Köln (Cologne) by Kieth Jarrett in which the pianist reluctantly agreed to play the concert on a sub-par piano, and (it’s argued because of the limitations of that instrument) went on to produce the best selling solo jazz album.

This tale sets up chapter one, which focuses on creativity, nicely. Creativity may be explicitly the topic of chapter one, but it’s a concept that cuts across the entirety of the book.

Tidiness – it is argued — is antagonistic to creativity. In the first chapter, Harford describes how David Bowie partnered up with Brian Eno, and how Eno’s “oblique strategies” – while they annoyed the musicians to no end by throwing monkey wrenches into the act of making music – were highly successful in producing a unique sound.

Chapter two discusses collaboration, which always makes a mess. Central to this chapter is a discussion of the Hungarian mathematician Paul Erdős and the famous Erdős number that virtually all scholars are familiar with — at least those in who work in math, science, engineering, and other disciplines with a quantitative bent.

It’s sort of a Kevin Bacon six-degrees-of-separation for those who make mathematics.

The number describes how far removed one is from having a paper penned with this notoriously prolific mathematician (co-authored, one removed co-author, etc.,) and everyone publishing quantitative / mathematical scholarship desired a low number.

The point made by Harford wasn’t just that collaboration in general is messy, but that working with Erdős, specifically, was, and it required collaborators to adjust to his peculiar, professorial ways.

Chapter three explores how tidy workplaces sometimes hinder productivity. The central case is MIT’s Building 20, which was popped up in record time to meet a wartime demand.

The building housed a disproportionate amount of world-class science and engineering, and it’s argued that this was in part because its poor design put random people together on long walks to exits or toilets, and in part because – since it was a hideous monstrosity of a building – no one cared if its labs and offices were a mess or not.

Chapter four delves into the value of mess in improvisation. Of course, Jazz is revisited in this chapter, but the lead story is Martin Luther King Jr.’s most famous speech and how it came out of being forced by circumstance to abandon his usual process of extensive preparation and editing.

Chapter five describes messy tactics as winning strategies. Erwin Rommel’s success by disruption and chaos creation is at the heart of this chapter as is the development of Britain’s SAS which sometimes beat Rommel at his own game by using a similar approach using smaller, more agile, and more elite forces.

There is also an extensive discussion of how Amazon went from humble beginnings to being the 800 pound gorilla of online shopping.

The sixth chapter investigates the role of incentives. For an economist, this is a fascinating topic as the key to understanding economic behavior is usually to follow the incentives.

Of course, unintended consequences often go hand in hand with attempts to produce / manipulate incentives. Much of this chapter describes how attempts to tie up loose ends through regulation have ended up generating worse outcomes than could ever have been anticipated.

The next chapter (ch. 7) is about automation, which could be seen as an attempt to clean up messy activities. Harford discusses the situation with self-driving cars, which it’s hoped will help to make highways safer.

However, the case he concentrates on is that of flight Air France 447, which went down in part because its inexperienced pilot at the helm couldn’t cope when the fly-by-wire system designed to anticipate and smooth the pilot’s inputs into the controls suddenly went off-line. In other words, the junior pilot wasn’t used to flying messy.

Chapter 8 is about resilience, and here the author challenges the age-old economic notion that specialization always results in greater productivity.

Harford suggests that diversity and intermixing of activities and peoples – rather than specialization and homogenization – often results in a better outcome.

The final chapter takes a wider view at how being messy can help one in life. The author spends a great deal of space to the question of how on：
➠ line dating services do such a poor job – spoiler alert – they try to make the messy process of finding a soulmate neat and tidy.

The book has citations and end-notes. In the Kindle edition, these notes are hyperlinked for ease of use. There are no graphics, but they aren’t missed.

About the Author
Tim Harford is an award-winning journalist, economist and broadcaster. He’s the author of the bestselling The Undercover Economist, The Undercover Economist Strikes Back, Adapt, and The Logic of Life. Harford is currently a senior columnist at the Financial Times and host of the BBC Radio 4 program More or Less. He has been named Economics Commentator of the Year (2014), won the Rybczynski Prize (2014–15) for the best business-relevant economics writing, and won the Bastiat Prize for economic journalism (2006). He’s a visiting fellow of Nuffield College at Oxford University and lives in Oxford with his family.

Be the first to review “Messy : How To Be Creative And Resilient In A Tidy-Minded World” Cancel reply