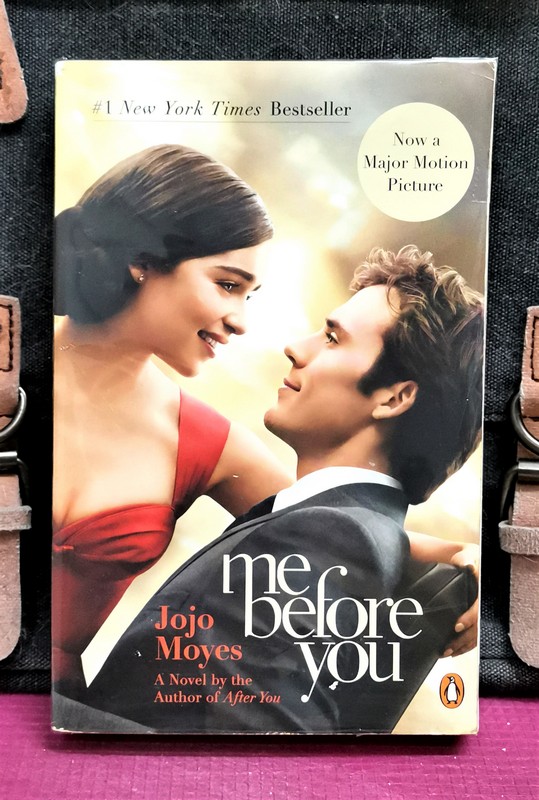 ME BEFORE YOU : A Novel (Movie Tie-In)

HOW NOT TO SELL : Why You Can’t Close The Deal and How To Fix It

A Love Story About Personal Redemption & Self-Worth, About Finding Courage, About Knowing What To Hold Onto And What To Let Go

★★ From the #1 New York Times bestselling author of The Giver of Stars, discover the love story that captured over 20 million hearts in Me Before You, After You, and Still Me.★★

They had nothing in common until love gave them everything to lose . . .

Me Before You is about Will Traynor, a rich, active businessman, whose life is turned upside down when he is involved in a motorcycle accident and paralysed from the chest downwards. His mother is desperate to find a full-time day carer for him and finds Louisa Clark, a recently unemployed young woman who doesn’t have any qualifications.

At first, Will and Lou don’t get along at all, but they learn a lot from each other as time goes on. This is a heartbreaking story about two people whose lives are irrevocably changed from the moment they meet. Louisa Clark is an ordinary girl living an exceedingly ordinary life—steady boyfriend, close family—who has barely been farther afield than their tiny village.

She takes a badly needed job working for ex–Master of the Universe Will Traynor, who is wheelchair bound after an accident. Will has always lived a huge life—big deals, extreme sports, worldwide travel—and now he’s pretty sure he cannot live the way he is.

Lou Clark knows lots of things. She knows how many footsteps there are between the bus stop and home. She knows she likes working in The Buttered Bun tea shop and she knows she might not love her boyfriend Patrick.

What Lou doesn’t know is she’s about to lose her job or that knowing what’s coming is what keeps her sane. Will Traynor knows his motorcycle accident took away his desire to live. He knows everything feels very small and rather joyless now and he knows exactly how he’s going to put a stop to that.

What Will doesn’t know is that Lou is about to burst into his world in a riot of colour. And neither of them knows they’re going to change the other for all time.

Twenty-six-year-old Louisa Clark lives with her working-class family. Unambitious and with few qualifications, she feels constantly outshone by her younger sister, Treena, an outgoing single mother. Louisa, who helps support her family, loses her job at a local café when the café closes.

She goes to the Job Center and, after several failed attempts, is offered a unique employment opportunity: help care for Will Traynor, a successful, wealthy, and once-active young man who has quadriplegia as a result of a pedestrian-motorcycle accident two years earlier.

Will’s mother, Camilla, hires Louisa despite her lack of experience, believing Louisa can brighten his spirit. Louisa meets Nathan, who cares for Will’s medical needs, and Will’s father, Steven, a friendly upper-class businessman whose marriage to Camilla is strained.

Louisa and Will’s relationship starts out rocky due to his bitterness and resentment over being disabled. Things worsen after Will’s ex-girlfriend, Alicia, and best friend Rupert reveal that they are getting married. Under Louisa’s care, Will gradually becomes more communicative and open-minded as they share experiences together.

Louisa notices Will’s scarred wrists and later overhears his mother and father discussing how he attempted suicide shortly after Camilla refused his request to end his life through Dignitas, a Swiss-based assisted suicide organization.

Horrified by his attempt, Camilla promised to honor her son’s wish, but only if he agreed to live six more months. Camilla intends to prove that, in time, he will believe his life’s worth living.

Louisa conceals knowing about Will and Camilla’s agreement. However, she tells Treena, and together they devise ways that will help convince Will to abandon his death wish. Over the next few weeks, Will loosens up and Louisa begins taking him on outings and the two grow closer.

Through their frequent talks, Louisa learns that Will has traveled extensively; his favorite place is a café in Paris. Noticing how limited his life is now and that he has few ambitions, Louisa tries to motivate Will to change.

Louisa continues seeing her longtime boyfriend of 7 years, Patrick, though they eventually break up due to her relationship with Will. Meanwhile, Louisa’s father loses his job, causing more financial difficulties. Steven Traynor offers Mr. Clark a position.

Louisa realizes that Will is trying to help her secure her freedom from her family. The two attend Alicia and Rupert’s wedding where they dance and flirt. Will tells Louisa that she is the only reason he wakes in the morning.

Louisa convinces Will to go on a holiday with her, but before they can leave, Will contracts near-fatal pneumonia. Louisa cancels the plans for a whirlwind trip. Instead, she takes Will to the island of Mauritius. The night before returning home, Louisa tells Will that she loves him. Will says he wants to confide something, but she admits that she already knows about his plans with Dignitas.

Will says their time together has been special, but he cannot bear to live in a wheelchair. He will be following through with his plans. Angry and hurt, Louisa storms off and does not speak to him for the remainder of the trip. When they return home, Will’s parents are pleasantly surprised by his good physical condition. Louisa, however, resigns as his caretaker, and they understand that Will intends to end his life.

Back at home Louisa is miserable and her mother is outraged when Louisa tells them everything about Will. The media and journalists arrive at the house having been tipped off by Patrick and the family become isolated. Treena then finds a message from Camilla Traynor requesting Louisa to come to Switzerland.

Louisa accepts despite her mother forbidding it and flies out to see Will. Once reunited again at the clinic they agree that the past six months have been the best in their lives. He dies shortly after in the clinic, and it is revealed that he left Louisa a considerable inheritance, meant to continue her education and to fully experience life.

The novel ends with Louisa at a café in Paris, reading Will’s last words to her in a letter, that tell her to ‘live well’.

A Love Story for this generation and perfect for fans of John Green’s The Fault in Our Stars, Me Before You brings to life two people who couldn’t have less in common—a heartbreakingly romantic novel that asks, What do you do when making the person you love happy also means breaking your own heart?

Jojo Moyes is the New York Times bestselling author of After You, Me Before You, One Plus One, The Girl You Left Behind, The Last Letter from Your Lover, Silver Bay, The Ship of Brides and Honeymoon in Paris. She lives with her husband and three children in Essex, England.