Shop - MAYBE YOU SHOULD TALK TO SOMEONE : A Therapist, Her Therapist, And Our Lives Revealed 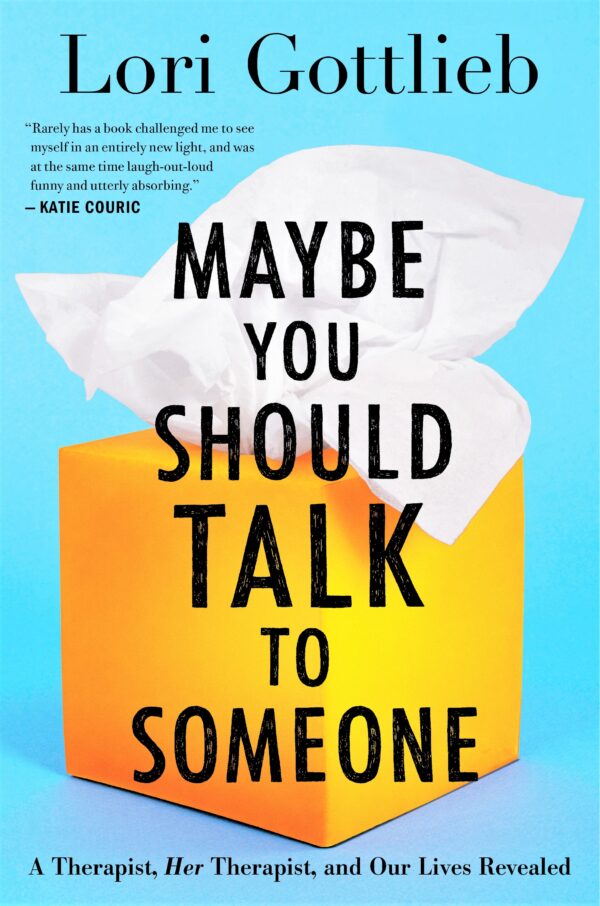 MAYBE YOU SHOULD TALK TO SOMEONE : A Therapist, Her Therapist, And Our Lives Revealed

A Tale of Magic #2: A Tale of Witchcraft

THE BOY AT THE BACK OF THE CLASS : Winner Of The Blue Peter Best Story Award 2019

A Disarmingly Funny, Thought-Provoking, And Boldly Revealing Book That Shows Us What It Means To Be Human

From a New York Times best-selling author, psychotherapist, and national advice columnist, a hilarious, thought-provoking, and surprising new book that takes us behind the scenes of a therapist’s world — where her patients are looking for answers (and so is she). Now being developed as a television series with Eva Longoria and ABC!

Every year, nearly 30 million Americans sit on a therapist’s couch—and some of these patients are therapists. In her remarkable new book, Lori Gottlieb tells us that despite her license and rigorous training, her most significant credential is that she’s a card-carrying member of the human race. “I know what it’s like to be a person,” she writes, as a crisis causes her world to come crashing down.

One day, Lori Gottlieb is a therapist who helps patients in her Los Angeles practice. The next, a crisis causes her world to come crashing down. Enter Wendell, the quirky but seasoned therapist in whose office she suddenly lands. With his balding head, cardigan, and khakis, he seems to have come straight from Therapist Central Casting. Yet he will turn out to be anything but.

Lori Gottlieb, psychotherapist, was in a long time relationship when suddenly it all came crashing down. Her boyfriend decides to break up with her because he can not live with a kid. This was a surprise to Gottlieb as the couple were deciding to get married and her boyfriend knew she had a child. During this time in her life, Gottlieb depicts common human emotions and struggles as anyone who is encountering hardships.

Despite being an expert and trained therapist herself, Gottlieb was encouraged by her friends to see a therapist due to her negative state of mind. She realizes that her grief can be addressed with a therapist and so she begins to see one named Wendell. In her first few sessions, Lori sits with her grief and cries. Once she has moved on from this stage, Wendell states that he thinks she is suffering with something more complicated than losing a boyfriend. This takes Gottlieb by surprise and confusion as she only came for a couple of sessions.

As the sessions continue, Lori takes us back to the beginning of her career. Lori is a writer in Los Angeles and works on a medical drama which sparked her interest in medical school. In order to fulfill her desire to help others and continue story telling, she decides to become a therapist.

As Gottlieb explores the inner chambers of her patients’ lives—a self-absorbed Hollywood producer, a young newlywed diagnosed with a terminal illness, a senior citizen threatening to end her life on her birthday if nothing gets better, and a twenty-something who can’t stop hooking up with the wrong guys (even one from the waiting room)—she finds that the questions they are struggling with are the very ones she is now bringing to Wendell.

With startling wisdom and humor, Gottlieb reveals our blind spots, examining the truths and fictions we tell ourselves and others as we teeter on the tightrope between love and desire, meaning and mortality, guilt and redemption, terror and courage, hope and change.

As the book progresses, Gottlieb talks about her four patients. John is a successful producer who is around the age of forty. He has two kids and is married. He believes that everyone around him is an idiot and that they are the problem. He doesn’t sleep a lot and is also having issues with his wife. At the beginning of the sessions, he is not likable and insults his therapist. Gottlieb tries to find a way to connect and see the underlying issue. She later finds out that he lost his son and experienced trauma that impacts his behavior and emotions.

A young woman named Julie is a newly wed and goes on her honeymoon. When she returns, she thinks she is pregnant as she feels something in her breast. But this was cancer which she was able to treat. Six months later, Julie goes to her sign off scan hoping that all is well and she can get pregnant now. However, she developed a rare form of cancer that is untreatable. The book shows how Julie struggles with her situation and with society’s thoughts.

Rita is a woman who is turning seventy and is very depressed. At a young age, Rita dropped out of college and married someone. After a couple of years, the husband had a drinking problem and became abusive to the children. Rita made significant mistakes as a parent and her adult children would not talk to her. She was not able to obtain her career of choice, had failed marriages, and was alone and isolated. Rita explains that joy is unanticipated pain and not pleasure for her. She seeks forgiveness from her children. She also tells Gottlieb that she does not want to live anymore if life doesn’t get better.

Charlotte is a woman in her twenties and is successful with her job. She drinks too much and ends up with the wrong man every time she hooks up, including someone in the waiting room. She gave up the hope of having a good childhood to have a better adulthood.

Maybe You Should Talk to Someone is revolutionary in its candor, offering a deeply personal yet universal tour of our hearts and minds and providing the rarest of gifts: a boldly revealing portrait of what it means to be human, and a disarmingly funny and illuminating account of our own mysterious lives and our power to transform them.

From shackled selves with brittle protective shells, Gottlieb and her patients crack through feelings of victimhood and despair to forge insights and self-awareness that allow in light, love, and a broad spectrum of fully experienced emotions. Along the way, Gottlieb provides a treasure trove of psychotherapy tidbits like an array of velvet-soft, multi-hued rose petals, strewn throughout the book:

1. Therapeutic Relationship: Study after study shows that the most crucial factor in the treatment’s success is the relationship. The experience of feeling felt matters more than therapists’ training, the kind of therapy they do, or what type of problem patients have.

2. Working in the here and now: Instead of focusing on a patient’s stories from the outside world, the here-and-now is about what’s occurring in the room. You can bet that whatever a patient does with his therapist, he also does with others.

3. Idiot Compassion: I didn’t want to fall into the trap that Buddhists call idiot compassion. In idiot compassion, you avoid rocking the boat to spare people’s feelings, even though the boats need rocking and your compassion ends up being more harmful than your honesty.

4. Telling the Truth: Whenever I’m not sure what to say in the therapy room – which happens to therapists more often than patients realize – I have a choice: I can say nothing until I understand the moment better, or I can attempt an answer, but whatever I do, I must tell the truth. Loss of trust is harder to repair.”

5. Numbness versus Nothingness: People often mistake numbness for nothingness, but numbness isn’t the absence of feelings; it’s a response to being overwhelmed by too many feelings.

6. What therapists do: Therapists listen, suggest, nudge, guide, and occasionally cajole patients into shifting their experience of what’s happening inside and around them. Before long, a common theme emerges, one that might not have been in their field of vision when they first came in.

Gottlieb’s writing is warm, approachable and laugh-out-loud funny with insights and human inner dialogue that belie the smooth, professional manner that we assume all therapists take on. The book was hilarious without poking fun at psychological health matters, engaging and emotional where it was needed, and informative about the process of therapy without being preachy or boring.

In summary, Maybe You Should Talk to Someone is a book about therapy but it is also about life. It is about understanding ourselves, getting through personal struggles, and healing. Not only does it show the lives of other people, it also gives us advice on how we can heal, grow and make our lives better.

A vivacious portrait of a therapist from both sides of the couch.

With great empathy and compassion, psychotherapist and Atlantic columnist and contributing editor Gottlieb (Marry Him: The Case for Settling for Mr. Good Enough, 2010, etc.) chronicles the many problems facing the “struggling humans” in her stable of therapy patients.

The intimate connection between patient and therapist established through the experience of psychic suffering forms the core of the memoir, as the author plumbs the multifaceted themes of belonging, emotional pain, and healing.

“Therapists…deal with the daily challenges of living just like everyone else….Our training has taught us theories and tools and techniques, but whirring beneath our hard-earned expertise is the fact that we know just how hard it is to be a person,” she writes.

Through Gottlieb’s stories of her sessions with a wide array of clients, readers will identify with the author as both a mid-40s single mother and a perceptive, often humorous psychotherapist. In addition to its smooth, conversational tone and frank honesty, the book is also entertainingly voyeuristic, as readers get to eavesdrop on Gottlieb’s therapy sessions with intriguing patients in all states of distress.

She also includes tales of her appointments with her own therapist, whom she turned to in her time of personal crisis. Success stories sit alongside poignant profiles of a newly married cancer patient’s desperation, a divorced woman with a stern ultimatum for her future, and women who seem stuck in a cycle of unchecked alcoholism or toxic relationships.

These episodes afford Gottlieb time for insightful reflection and self-analysis, and she also imparts eye-opening insider details on how patients perceive their therapists and the many unscripted rules psychotherapists must live by, especially when spotted in public (“often when patients see our humanity, they leave us”). Throughout, the author puts a very human face on the delicate yet intensive process of psychotherapy while baring her own demons.

Saturated with self-awareness and compassion, this is an irresistibly addictive tour of the human condition.

Lori Gottlieb is a psychotherapist and New York Times bestselling author of Maybe You Should Talk to Someone, which has sold over a million copies and is being adapted as a television series. In addition to her clinical practice, she is co-host of the popular “Dear Therapists” podcast produced by Katie Couric, and she writes The Atlantic’s weekly “Dear Therapist” advice column.

Her recent TED Talk was one of the Top 10 Most Watched of the Year and she recently created Maybe You Should Talk To Someone: The Workbook, a toolkit to help people rewrite their stories and change their lives. She is a sought-after speaker and expert in media such as The Today Show, Good Morning America, The CBS Early Show, CNN, and NPR’s “Fresh Air.”