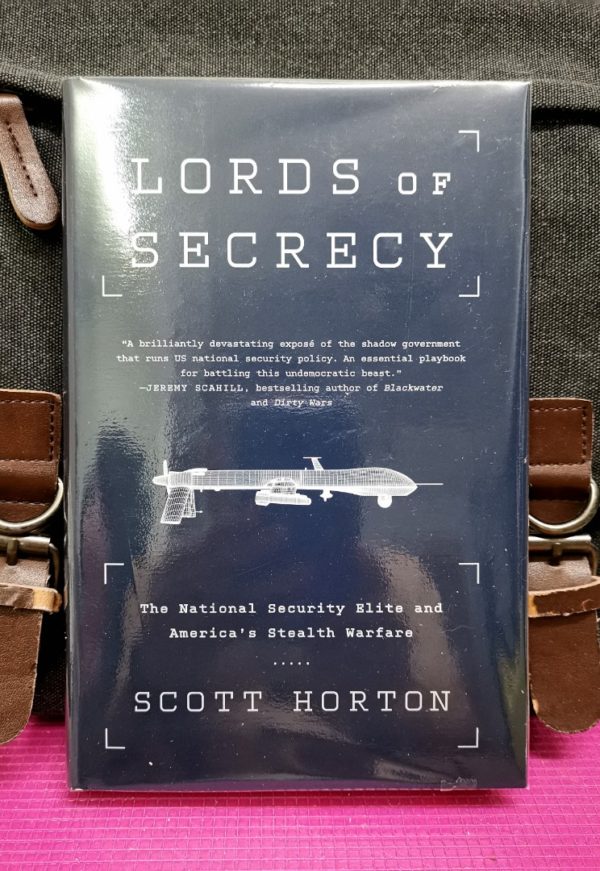 This Washington Post / Political Bestseller in hardcover edition is a bran-new book and still wrapped with new-book plastic seal-wrapper. The original new book is sold at usual price RM119.03 (Hardcover). Now here Only at RM30.

Forty years ago, a majority of Americans were highly engaged in issues of war and peace. Whether to go to war or keep out of conflicts was a vital question at the heart of the country’s vibrant, if fractious, democracy.

But American political consciousness has drifted.

In the last decade, America has gone to war in Iraq and Afghanistan, while pursuing a new kind of warfare in Yemen, Somalia, Libya, and Pakistan.

National security issues have increasingly faded from the political agenda, due in part to the growth of government secrecy.

State secrecy is increasingly used as the explanation for the shrinking of public discussion surrounding national security issues.

The phrase “That’s classified” is increasingly used not to protect national secrets from legitimate enemies, but rather to stifle public discourse regarding national security.

Washington today is inclined to see secrecy as a convenient cure to many of its problems.

But too often these problems are not challenges to national security, they involve the embarrassment of political figures, disclosure of mismanagement, incompetence and corruption and even outright criminality.

In lucid and chilling detail, journalist and lawyer Scott Horton shows how secrecy has changed the way America functions.

Executive decisions about war and peace are increasingly made by autonomous, self-directing, and unaccountable national security elites.

Secrecy is justified as part of a bargain under which the state promises to keep the people safe from its enemies, but in fact allows excesses, mistakes, and crimes to go unchecked.

Bureaucracies use secrets to conceal their mistakes and advance their power in government, invariable at the expense of the rights of the people.

Never before have the American people had so little information concerning the wars waged in their name, nor has Congress exercised so little oversight over the war effort. American democracy is in deep trouble.

Lords of Secrecy explores the most important national security debates of our time, including the legal and moral issues surrounding the turn to private security contractors, the sweeping surveillance methods of intelligence agencies, and the use of robotic weapons such as drones.

Horton looks at the legal edifice upon which these decisions are based and discusses approaches to rolling back the flood of secrets that is engulfing America today.

Whistleblowers, but also Congress, the public, and the media, play a vital role in this process.

As the ancient Greeks recognized, too much secrecy changes the nature of the state itself, transforming a democracy into something else.

Horton reminds us that dealing with the country’s national security concerns is both a right and a responsibility of a free citizenry, something that has always sat at the heart of any democracy that earns the name.

For national security issues to figure in democratic deliberation, the public must have access to basic facts that underlie the issues.

The more those facts disappear under a cloak of state secrecy, the less space remains for democratic process and the more deliberation falls into the hands of largely unelected national security elites.

The way out requires us to think much more critically and systematically about secrecy and its role in a democratic state.

The American government, primarily the security agencies since 9/11, and in particular the CIA (with “intelligence” in this case a blatant oxymoron) comes in for the much deserved criticism of the trinity of corruption, incompetence, and criminality.

But these misadventures are just the appetizers to the entree of secrecy.

Horton contends that ubiquitous secrecy claims promote, protect and even reward governmental greed and greed for power, flagrant and continued incompetence, nearly unbelievable malfeasance and naked criminality and the cover-up of same.

As this iron curtain of secrecy expands and bloats, publicity and individual privacy shrink to nothingness. There are no negative consequences for these, at best, misadventures and at worse, torture and murder; instead, the worse these government criminals act, the higher and faster they rise in the bureaucracy.

This book mainly encompasses the Bush and Obama years. Published in 2015, it does not include the ground zero morass of Trump and his minions.

But it’s getting worse, with the fear worshiping collusion of Congress and elementary rubber stamping of the judiciary and, worst of all, the cowardly abdication of the fourth estate.

So the media sucks up the security elite’s pablum and lies, Congress pleasures itself with nonstop fundraising and reelection, the judiciary is just the media in nice robes and big, useless words, and the rest of us get either lies or nothing, of course for our own good, at the same time spied on and wiretapped and photoed all over the place.

The power of state secrets and their keepers has waxed and waned many times in the history of modern democracies.

In the early days of the cold war, US spymasters exercised such autonomy that they would share their most jealously guarded decrypts with the British before their own president.

There are countless other tales of intrigue. And yet cold warriors and their predecessors could only dream of the reach, power and resources of the west’s intelligence agencies today.

In a digitised, fragile and fast-changing world, the power of intelligence is fetishised like never before.

Aside from the fallout from the US-led invasion of Iraq in 2003, however, there has been relatively little reflection on what this might mean for our polity. Until, that is, Edward Snowden blew the doors wide open.

Scott Horton’s book is an attempt to catalogue what we know about the abuses of America’s security services in a post-Snowden world.

The fundamental premises of Lords of Secrecy are familiar ones: bureaucracies accrete power; secrecy has been one of their greatest weapons in doing so.

And the book focuses on an important question: what does the fact that so much money is lavished on black-box agencies, so many actions of government are hidden from scrutiny and so many people are beyond the reach of elected lawmakers actually mean for democracy and society?

There is the case of German greengrocer Khaled el-Masri, who was imprisoned and tortured by CIA operatives for weeks, even after they knew he was not their man.

They wanted someone else with a similar-sounding name. No reason has ever been given as to why the wrong Mr el-Masri was held unjustly for so long.

There is also the graft. The superbly named Dusty Foggo was the executive director of the CIA, and helped shield agency personnel involved in the George W Bush administration’s “extraordinary rendition” programme of extrajudicial transfers of terrorism suspects to countries that practice torture.

That is until he was jailed after pleading guilty to fraud involving government contracts. A sentencing memorandum, Mr Horton notes, “revealed Foggo had a 20-year career of alcohol abuse, physical violence, philandering and corruption”.

Then there is the sheer obscurantism of it all: why on earth should the legal opinion justifying the killing of US citizen-turned jihadi terrorist Anwar al-Awlaki have been kept confidential?

The mania for secrecy can produce absurdity. Archive documents released by the Pentagon last February on the Cuban missile crisis included redactions on the outcome of the situation.

Every high school textbook in America covers the details of the subsequent US withdrawal of its missiles from Turkey, but the Pentagon still paranoiacally regards such information as top secret.

It is hard not to extrapolate from these tales a notion of a vast secret state beyond control. Horton does so with some finesse.

The book is compelling. But it is not quite the whole picture. Secrecy is sometimes necessary. And desirable.

Amid the titillating Snowden revelations of mass internet surveillance by the US and British electronic security agencies, it is easy to forget that we do want them to spy — and successfully, if possible — on would-be terrorists.

We also live in an age when a hostile nation, even one as technologically backward as North Korea, can project digital damage into the heartland of America. We need agencies able to counter this. They can only do so in the shadows.

The “lords of secrecy” do need to be kept in check, of course. But that may soon happen anyway. After all, principles go only so far in holding the clandestine arms of the state to account; money goes a lot further.

But money is one thing that is not quite so freely available in Washington, or many other capitals in the west, no matter how many secrets they have.

About the Author
Scott Horton is a contributing editor at Harper’s magazine and a recipient of the National Magazine Award for reporting for his writing on law and national security issues. Horton lectures at Columbia Law School and continues to practice law in the emerging markets area. A lifelong human rights advocate, Horton served as counsel to Andrei Sakharov and Elena Bonner, among other activists in the former Soviet Union.

Be the first to review “Lords of Secrecy : The National Security Elite and America’s Stealth Warfare” Cancel reply