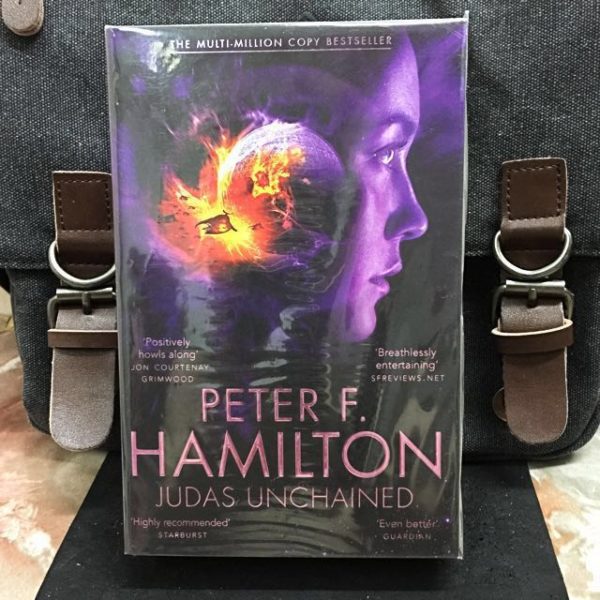 FORTRESS : On Our Cities’ Streets A New Battle Is Being Fought….
Peter F. Hamilton
Brand-new, Paperback

This highly recommended bestselling fiction by Starburst is a bran-new book and the original new book is sold at usual price RM65.78. Now here Only at RM13.

Judas Unchained is the high-action concluding novel of the Commonwealth Saga from Peter F. Hamilton, one of the world’s bestselling science fiction writers.

For hundreds of years the human race has been manipulated into starting a war that could destroy civilisation.

As Chief Investigator Paula Myo hunts down the terrifying creature behind the ploy, the invasion continues and dozens of worlds fall to the enemy.

Admiral Kime orders a defence with war-winning super-weapons, only to find that their adversaries have equally powerful armaments.

How they got them is the question. Has the Commonwealth’s top-secret defence project been compromised, or is the truth even worse?

Peter F. Hamilton’s superbly imagined, cunningly plotted interstellar adventures are conceived on a staggeringly epic scale and filled with fully realized human and alien characters as complex as they are engaging.

No mere world builder, Hamilton creates entire universes–and he does so with irresistible flair and intelligence. His previous novel, the acclaimed Pandora’s Star, introduced the Intersolar Commonwealth, a star-spanning civilization of the twenty-fourth century. Robust, peaceful, and confident, the Commonwealth dispatched a ship to investigate the mystery of a disappearing star, only to inadvertently unleash a predatory alien species that turned on its liberators, striking hard, fast, and utterly without mercy.

The Prime are the Commonwealth’s worst nightmare. Coexistence is impossible with the technologically advanced aliens, who are genetically hardwired to exterminate all other forms of life. Twenty-three planets have already fallen to the invaders, with casualties in the hundreds of millions. And no one knows when or where the genocidal Prime will strike next.

Nor are the Prime the only threat. For more than a hundred years, a shadowy cult, the Guardians of Selfhood, has warned that an alien with mind-control abilities impossible to detect or resist–the Starflyer–has secretly infiltrated the Commonwealth. Branded as terrorists, the Guardians and their leader, Bradley Johansson, have been hunted by relentless investigator Paula Myo.

But now evidence suggests that the Guardians were right all along, and that the Starflyer has placed agents in vital posts throughout the Commonwealth–agents who are now sabotaging the war effort. Is the Starflyer an ally of the Prime, or has it orchestrated a fight to the death between the two species for its own advantage?

Caught between two deadly enemies, one a brutal invader striking from without, the other a remorseless cancer killing from within, the fractious Commonwealth must unite as never before.

This will be humanity’s finest hour–or its last gasp.

After hundreds of years secretly manipulating the human race, the Starflyer alien has succeeded in engineering a war which should result in the destruction of the Intersolar Commonwealth. Now, thanks to Chief Investigator Paula Myo, the Commonwealth’s political elite finally acknowledges the Starflyer’s existence, and puts together an unlikely partnership to track down this enigmatic and terrifying alien.

The invasion from Dyson Alpha continues with dozens of Commonwealth worlds falling to the enemy. The navy fights back with what it believes to be war-winning superweapons, only to find that the alien fleet has been given equally powerful weapons. How the aliens got them is the question that haunts Admiral Wilson Kime. Could it be that the Commonwealth’s top-secret defence project has been compromised by the Starflyer’s agents, or is the truth even worse?

To Mark Vernon, mechanic and general repairman extraordinaire, it appears he’s landed on his feet when he finds the perfect job on the most secure world in the Commonwealth. He and his family will never be in danger again now that he’s helping to build starships that will evacuate the ultra-rich should the war be lost. Until one day when Nigel Sheldon arrives to ask him a small favour. You don’t say no to the man who created the Commonwealth. But the problem with small favours is the way they tend to grow…

With the war going badly and the Starflyer’s treachery threatening the very heart of the Commonwealth, only the alien’s destruction can turn the tide. As Paula Myo finally begins to close in on her quarry, the operation is sabotaged from within. If the nemesis is ever to be beaten, Paula will have to work out which of her colleagues is plotting to betray the entire human race.

Be the first to review “Judas Unchained” Cancel reply