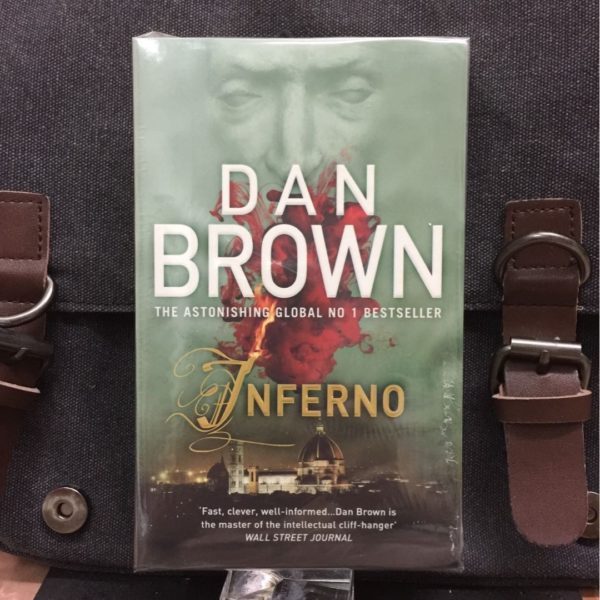 Why Do Women Crave More Sex in the Summer? : 112 Questions That Women Keep Asking-And That Keep Ever
Dan Brown
Brand-new, Paperback

This #1 WORLDWIDE BESTSELLER in paperback edition is a bran-new book and still wrapped with protective book-wrapper. The original new book is sold at usual price RM41.95. Now here Only at RM13.

Inferno is a 2013 mystery thriller novel by American author Dan Brown and the fourth book in his Robert Langdon series, following Angels & Demons, The Da Vinci Code and The Lost Symbol.

Harvard professor of symbology Robert Langdon awakens in an Italian hospital, disoriented and with no recollection of the past thirty-six hours, including the origin of the macabre object hidden in his belongings.

With a relentless female assassin trailing them through Florence, he and his resourceful doctor, Sienna Brooks, are forced to flee. Embarking on a harrowing journey, they must unravel a series of codes, which are the work of a brilliant scientist whose obsession with the end of the world is matched only by his passion for one of the most influential masterpieces ever written, Dante Alighieri’s The Inferno.

Dan Brown has raised the bar yet again, combining classical Italian art, history, and literature with cutting-edge science in this sumptuously entertaining thriller.

Harvard professor Robert Langdon wakes up in a hospital with a head wound and no memory of the last few days. He last remembers walking on the Harvard campus, but he quickly realizes that he is now in Florence, Italy. Dr. Sienna Brooks, one of the doctors tending to him, reveals that he is suffering from amnesia. When Vayentha, a female assassin, shows up in the hospital and kills Dr. Marconi, Brooks helps Langdon escape, and they flee to her apartment.

After Brooks recounts the details of his admission to the hospital, Langdon finds a cylinder with a biohazard sign in his jacket and decides to call the U.S. consulate. He is told that they are searching for him and want his location. Per Brooks’ guidance, he gives them a location across the street from her apartment to avoid getting Brooks more involved in his mysterious situation than she already is. Soon, Langdon sees Vayentha pull up to the location he gave the consulate. At this point, they both believe the U.S. government wants to kill him. Langdon then decides to open the container and finds a small medieval bone cylinder fitted with a hi-tech projector that displays a modified version of Botticelli’s Map of Hell, which is based on Dante’s Inferno. A trail of clues leads them toward the Old City.

However, they are dismayed to find that a secretive team of soldiers, and the Florentine Carabinieri are also searching for them. They flee into a construction site near the Boboli Gardens where he examines the “Map of Hell” again, noticing several subtle changes to the layers. Langdon discovers a phrase from the painting The Battle of Marciano by Vasari, located in the Palazzo Vecchio. They manage to evade the soldiers and get into the Old City using the Vasari Corridor.

He realizes he is retracing his own steps from the previous night. Finding the mask gone, security footage shows Langdon and Busoni stealing the mask. Fleeing the guards, they listen to a message Busoni left telling him where the mask is hidden, referring to “Paradise 25.”

Langdon and Brooks escape the guards, but the soldiers arrive. They cross the attic over the Apotheosis of Cosimo I, where Brooks pushes Vayentha to her death. Langdon connects the phrase “Paradise 25” to the Florence Baptistry, where they find the Dante mask along with a riddle from its current owner, a billionaire geneticist named Bertrand Zobrist.

She explains that Zobrist was a geneticist who advocated the halting of humanity’s growth, due to its out of control population and that he was rumored to be working on a means to do so using an engineered disease. A man named Jonathan Ferris, with a large bruise on his chest which he hides from the two, and a severe rash on his face, claiming to be from the World Health Organization (WHO), comes and helps them escape the soldiers.

They follow the riddle to Venice, where Ferris suddenly falls unconscious, with Brooks claiming he is suffering from massive internal bleeding, causing Langdon to suspect Ferris has been infected with Zobrist’s plague. He is captured by a group of black-clad soldiers while she escapes.

Langdon is taken to Dr. Elizabeth Sinskey, the director-general of the WHO, and is given an explanation of what is going on: Zobrist, who committed suicide the week before, was a brilliant geneticist and Dante fanatic who had supposedly developed a new biological plague that will kill off a large portion of the world’s population in order to quickly solve the problem of the world’s impending overpopulation, citing the Doomsday Argument.

Sinskey raided Zobrist’s safe deposit box, found the cylinder and flew him to Florence to follow the clues. However, he stopped communicating with Sinskey after meeting with Alvarez and Ignazio and the WHO feared he betrayed them and was working with Zobrist to unleash the plague. The soldiers were the WHO’s emergency response team and never meant to kill him.

Zobrist had paid a shadowy consulting group called The Consortium to protect the cylinder until a certain date. He also left a disturbing video filled with Dante imagery, which also showed a picture of the plague itself, kept in a hidden underwater location, within a slowly dissolving bag.

The video claims that the world will be changed the following morning. When Sinskey took it away, they abducted Langdon and staged every event up to this point so that he would be motivated to solve it.

The leader of The Consortium, having become aware of the bioterrorism plot, agrees to cooperate with the WHO. Ferris’s rash was due to an allergic reaction to the spirit gum he used as part of the disguise as the doctor Vayentha “murdered.” His bruises were because the squib used to simulate him being shot in the chest misfired and broke his ribs. He collapsed in Venice because he had been ordered to detain Brooks, as the Provost (Consortium head) had allied with Sinskey, with Brooks realizing and punching him in his damaged ribs.

Brooks goes rogue and The Consortium realizes she was a secret supporter and lover of Zobrist. She learned where the plague was being kept after Langdon solved the riddle and acquires a private jet to get to it before everyone else. Langdon, the WHO and The Consortium team up to stop her. After watching Zobrist’s video, they conclude that the bag containing the plague will be fully dissolved by the date the video specifies and that Zobrist’s clues point to its location: the Hagia Sophia in Istanbul, where Enrico Dandolo is buried.

He and the others find the plague is in the Cistern but discover that she is already there. The bag that held the plague had already been broken, presumably spreading through the outer world via visiting tourists. Brooks runs out of the Cistern yelling something in Turkish, which causes panic among the tourists who stampede out into the city while Langdon gives chase.

Inside Basilica Cistern, with water below and tourists above
It is discovered Brooks didn’t puncture the bag; it was water-soluble and had dissolved one week earlier in the cistern waters, meaning that the whole world has already been infected. The date specified in Zobrist’s video was the mathematical calculation of when the entire world would be infected. It is also discovered that she was trying to stop the virus herself, but didn’t trust the WHO because samples of the virus would certainly find their way into the hands of governments performing weapons research.

The leader of The Consortium tries to escape WHO custody with help from disguised underlings, but is caught later by Turkish police. She receives amnesty in exchange for working with the WHO to address the crisis, since she is a medical doctor and has extensive knowledge of Zobrist’s research and work.

The plague that Zobrist created is revealed to be a vector virus that randomly activates to employ DNA modification to cause sterility in one third of humans, thereby reducing population growth to a more stable level. Sinskey and Brooks decide not to try to reverse Zobrist’s actions, Brooks pointing out that doing so would be difficult and hazardous even for someone like Zobrist and Sinskey acknowledging that Zobrist had a point about the dangers of overpopulation.

Be the first to review “Inferno” Cancel reply