Shop - In the Interests of Safety : The absurd rules that blight our lives and how we can change them 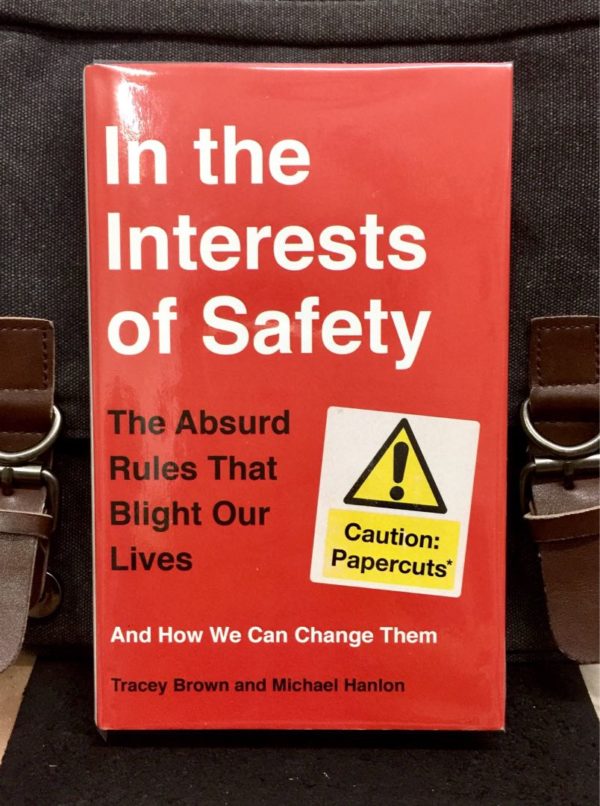 In the Interests of Safety : The absurd rules that blight our lives and how we can change them

Idea Man : A Memoir by the Cofounder of Microsoft

This UK The Guardian bestseller in hardcover edition is a bran-new book and nicely wrapped with protective book-wrapper. The original new book is sold at usual price RM73.65. Now here Only at RM18.

☞ Does an airline pilot really need to surrender his tweezers at airport security when he’s about to board an aircraft equipped with an axe on the back of the cockpit door?

☞ Can a mobile phone really cause a major explosion at a petrol station?

☞ And is there really a good reason why you should be prevented from swimming in a lake more than a foot deep?

In the interests of safety we are guided out of danger we never knew we were in.

In the interests of safety we are protected from threats we never knew existed.

These rules exist, and they exist in the name of our own protection. But in this engrossing dissection of global safety rules and security regulations, authors Tracey Brown and Michael Hanlon dig a little deeper to discover the real reasons behind many of the instructions we obey without questioning their creators’ motives.

In the past 20 years, safety and security measures have infiltrated every part of our lives, these measure are spreading. They are making our lives more complicated, more ecpensive and more frustrating, with very few of them actually making us any safer.

Their conclusions range from the startling to the staggering, and in presenting them the authors seek to empower readers to question the people and organisations who come up with them in the first place.

IT’S TIME TO FIGHT BACK..

Great book on the topic. It clarifies doubts we’ve all had on “safety” measures, while also giving you an idea on what has been done to stop the madness that somettimes takes hold. Of course, the book also fills you with a burning rage as you are reminded of useless, irritating and costly procedures that cannot be stopped any time soon, or of many instances in which confrontation occurs with bullheaded officials.

In the Interests of Safety review – it’s health and safety gone mad! – By Steven Poole

Unpasteurised cheese dangerous? What about guns? Steven Poole on Tracey Brown and Michael Hanlon’s suggestions for how to change ‘the absurd rules that blight our lives’

On my way to Poland for a book festival the other week, I was going through security at Heathrow behind a man of advanced years who walked with a crutch. He went through the metal detector leaning on his wife, having left the crutch next to the conveyor belt. The detector beeped, so the man was given his crutch and forced to go back through to remove his shoes, a procedure that obviously caused him some annoyance and discomfort.

My fellow travellers and I were all mightily relieved when the implement came out the other end, indicating, reassuringly, that the man was not a maniacal terrorist with a cunning crutch-bomb.

We’ve all seen such examples of what the writer Bruce Schneier calls the meaningless “security theatre” at airports. One pilot had his butter knife confiscated, just before taking the controls of an enormous metal machine packed with flammable fuel. Liquids were banned in carry-on baggage even though the inciting incident – a “plot” to mix innocuous chemicals in the plane’s toilet and thereby produce explosives – almost certainly wouldn’t have worked.

And yet, as Tracey Brown and Michael Hanlon point out in this book, passengers are not only allowed but encouraged to buy and take on board large duty-free bottles of alcoholic spirits, which could easily be turned into Molotov cocktails.

This book about absurd rules considers such “security” restrictions as well as more general “health and safety” rules. While “security” promises to protect us from external threat, “safety” protects us from accident or ourselves. Actually, the phrase “health and safety” has become so familiar that we don’t quite notice that the two concepts are not necessarily mutually reinforcing.

What is healthy might be unsafe (going jogging along a river populated by irritable hippos), and what is safe might be unhealthy (staying indoors bingewatching Netflix series 24 hours a day).

But that aside, who is against health? And who hates safety? These terms, along with “security”, function as a kind of soothing, brain-deadening Unspeak to bamboozle us into supposing that whatever is done under the rubric must be for the best.

And yet safety rules, as these authors argue, sometimes turn out to have more dangerous consequences than those they are trying to forestall. If a parent, for example, is not allowed to leave her seven-year-old son alone at his one-on-one swimming lesson with a qualified swimming instructor, this will tend to discourage the uptake of swimming lessons.

And discouraging children from learning to swim is dangerous: more of them will drown. US policemen increasingly use the Taser as a “compliance tool” rather than only a non-fatal replacement for a firearm, which results in more injuries and deaths.

And even the equidistant rungs of a child’s playground ladder, according to one Danish landscape architect, are dangerous, because the child no longer needs to think as carefully about where the feet should go.

So this book is not, as I initially feared, a compilation of tabloid-style “It’s health and safety gone mad!” stories. Indeed, many of them are carefully debunked: it usually turns out that there was no official rule, but a jobsworth supervisor simply made one up (as in a supposed ban on London tube workers wearing woolly hats).

Some tales of bonkers bureaucratic overkill, though, do seem to be true: the authors draw an amusing comparison between the laconic one-page safety-assessment form for workers on an oil rig, and the 30-page questionnaire that secondary-school teachers in Kent had to fill out before taking pupils to the beach.

In general, whenever officials cite terrorism laws to stop you taking photographs in public, or a call-centre worker cites “data protection” as a reason not to tell you something innocuous, the authors recommend an attitude of polite obstreperousness. “Really? Which rule are you thinking of? And how does it apply here?”

“The core philosophy of the book,” the authors say, “is ask for evidence.” Not really a philosophy, but a good idea anyway. It turns out that there is no evidence that, say, using your mobile phone at a petrol station is dangerous.

Nor has there ever been any evidence that using your mobile phone, or any other electronic equipment, will interfere with the avionics on commercial aircraft. (So that rule is, finally, beginning to be relaxed.)

The government-endorsed claim that “cybercrime” costs Britain £27bn a year originates (who would have guessed?) from a company hawking anti-cybercrime measures – the figure is, according to one computer-science professor consulted here, “complete bollocks”.

If we were really interested in “evidence-based safety”, the authors argue, we would “ban large trucks from city centres” (they kill a lot of cyclists), as well as raising the driving age to 17 (it is lower in many US states) or higher. But some options, they lament, are simply off the table politically. “In America, this is why people can’t buy unpasteurised cheese but can buy a gun … In Britain, it is why people fret about dangerous dogs but do little to reduce or calm the traffic around schools and playgrounds.”

Occasionally, though, the authors’ desire to tell a neat counterintuitive story is vulnerable to the same kind of demand for more evidence.

After the Clapham Junction train crash of 1988, they relate, fares increased to pay for improved safety measures. The following year saw a big increase in road journeys. Since cars are far more dangerous than trains, this resulted in more injuries and deaths. So, the authors conclude, “more people died as a result of the new safety measures introduced on Britain’s railways than in the crash that catalysed them”.

What is wrong with this story? Well, it is true that rail fares increased in January 1989, by 10% on Network SouthEast and by up to 20% on InterCity trains. The question is whether that alone was sufficient to drive so many rail passengers on to the roads.

Another potential contributory cause that the authors don’t consider is that many people were frightened off the trains by media coverage of a major rail disaster. A combination of the fear factor and price rises is probably to blame. But this is a salutary example of the fact that cause and effect – as the authors themselves are at pains to emphasise elsewhere – is often quite hard to sort out without all the conceivably appropriate facts and statistics.

There is safety in numbers, perhaps, but you need all the relevant figures to hand.

About the Authors
Michael Hanlon is a London-based science journalist and author who writes regularly for national newspapers as well as The Spectator and New Scientist. Michael is the author of five popular science books, including: The Science of the Hitchhiker’s Guide to the Galaxy, Ten Questions Science Can’t Answer Yet and Eternity: Our Next Billion Years. Michael has participated in a gorilla rescue in Congo, become thoroughly lost in central Borneo and experienced a zero-gravity astronaut training flight over the Nevada desert. He finally saw the light about climate change after a swim in a melt-water lake a mile up on the Greenlandic icecap.

Tracey Brown is the Director of Sense About Science, a charity that campaigns for better evidence in public debate and policy making in the UK, and world-wide through international collaboration. She has led award-winning national campaigns to defend sound research and to stop misleading medical claims and, through Sense About Science, is currently challenging the routine concealment of clinical trial data by medical drug development companies. Tracey has contributed to books and journals on science, policy and the public, including Better Science Communication and comments regularly in newspapers, magazines, events and broadcasts.

Be the first to review “In the Interests of Safety : The absurd rules that blight our lives and how we can change them” Cancel reply