Shop - Idea Man : A Memoir by the Cofounder of Microsoft 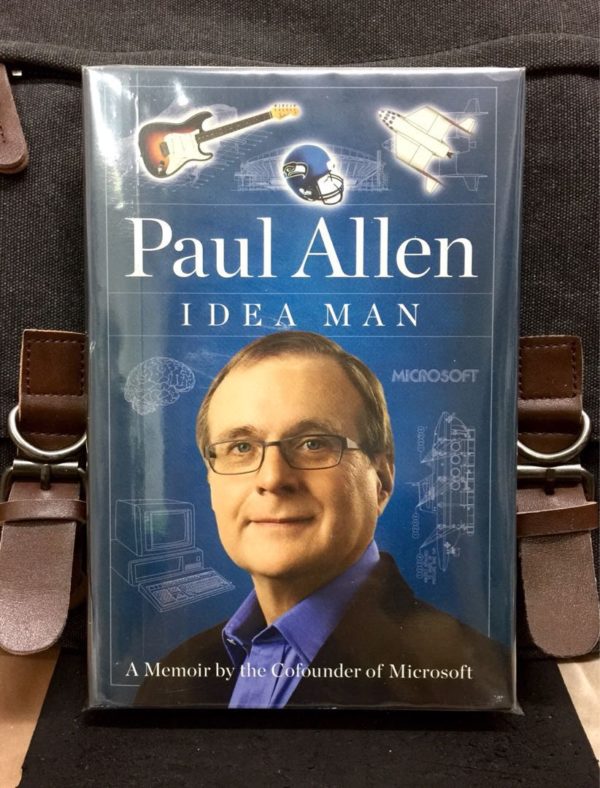 Idea Man : A Memoir by the Cofounder of Microsoft

Work Simply : Embracing the Power of Your Personal Productivity Style

In the Interests of Safety : The absurd rules that blight our lives and how we can change them
Paul Allen
Brand-new, Hardcover

This New York Times bestseller in hardcover edition is a bran-new book and nicely wrapped with protective book-wrapper. The original new book is sold at usual price RM109.19 (Hardcover). Now here Only at RM18.

Idea Man: A Memoir by the Cofounder of Microsoft (2011) is the New York Times bestselling memoir by Microsoft cofounder Paul Allen.

The book recounts how Allen became enamored with computers at an early age, conceived the idea for Microsoft, recruited his friend Bill Gates to join him, and launched what would become the world’s most successful software company.

By his early thirties, Paul Allen was a world-famous billionaire-and that was just the beginning.

In 2007 and 2008, Time named Paul Allen, the cofounder of Microsoft, one of the hundred most influential people in the world. Since he made his fortune, his impact has been felt in science, technology, business, medicine, sports, music, and philanthropy. His passion, curiosity, and intellectual rigor-combined with the resources to launch and support new initiatives-have literally changed the world.

In 2009 Allen discovered that he had lymphoma, lending urgency to his desire to share his story for the first time. In this long-awaited memoir, Allen explains how he has solved problems, what he’s learned from his many endeavors-both the triumphs and the failures-and his compelling vision for the future. He reflects candidly on an extraordinary life.

The book also features previously untold stories about everything from the true origins of Microsoft to Allen’s role in the dawn of private space travel (with SpaceShipOne) and in discoveries at the frontiers of brain science. With honesty, humor, and insight, Allen tells the story of a life of ideas made real.

The book, reveals the often conflicted partnership between Allen and Gates, and how — when Allen was recovering from cancer — Gates unsuccessfully conspired to dilute Allen’s 36 percent share of Microsoft.

Idea Man also explores Allen’s business and creative ventures following his 1983 departure from Microsoft, including his involvement in SpaceShipOne, his purchase of the Portland Trailblazers and Seattle Seahawks, his passion for music, and his ongoing support for scientific research.

Described by critics as candid, profound and incendiary, Idea Man is a true story of ambition and ideas made real.
—————————————————-
The Guardian Review :

They say you can never be too thin, or too rich. After reading Paul Allen’s memoir, I’m not so sure – especially about the rich bit. After founding Microsoft in 1975 with his friend and schoolmate Bill Gates, Allen spent eight frenzied years building it into the corporate colossus that it is today. But then two things happened: he became ill with Hodgkin’s lymphoma; and he decided that life was too short to endure the perpetual conflict that comes with working with Bill Gates. And so he quit in 1983 (having rebuffed Gates’s offer to buy his Microsoft stock at a knockdown price), held on to his shares and has spent the rest of his life with his money (his net worth was $1bn in 1990 and was 13 times that in 1996).

His memoir, like his life, divides neatly into two parts, of which the first is by far the most engaging. Allen and Gates were schoolmates at the exclusive private Lakeside school in Seattle. Because of the school’s eccentric decision to install a terminal that was linked to a General Electric mainframe computer in a distant office, the two boys had a unique opportunity to teach themselves programming, and in relatively short order acquired more experience and expertise than most undergraduates at the time (the mid-1960s).

After high school, Gates went to Harvard and Allen got a job with Honeywell in the Boston area, but their joint obsession with programming continued. In 1975, an obscure New Mexico startup launched the MITS Altair, the world’s first microcomputer.

The problem was that it was also the world’s biggest paperweight, because there was no software for it to run. Allen and Gates set out to write a Basic interpreter for it – software that would enable the machine to run programs written in the Basic programming language – without being able to get their hands on the hardware. That they were able to do this was due to two factors: their coding ability; and the fact that Allen had created a software simulator of the Altair machine that ran on a Harvard minicomputer. As a result, they got the contract to supply Basic for the Altair, and Microsoft was born.

There’s an important lesson here that has subsequently been airbrushed out of the Microsoft legend: Allen’s contributions to the partnership were as critical as Gates’s. Without the tools that he developed, and his insight into the infrastructure that software development requires,

Microsoft’s subsequent growth would have been impossible. When the Apple II arrived on the scene, powered by a processor for which Microsoft had no software products, it was Allen who came up with the solution that enabled owners of the Apple machine to run software written for non-Apple devices – a plug-in card running the CP/M operating system. It was a masterstroke that got Microsoft out of a deepening hole.

And it was Allen who pulled off the biggest coup of all in the company’s early development. When IBM was looking for an operating system to run its new personal computer, Microsoft didn’t have one; it did programming languages, not operating systems. But Allen had contacts with a tiny Seattle company that had developed a rudimentary operating system, QDOS (for “quick and dirty DOS”), and negotiated a deal to buy the rights to it, thereby enabling Microsoft to offer the increasingly frantic IBM designers a solution to their problem. The rest is history: the IBM PC became the de facto standard for a colossal industry, DOS became its operating system and Microsoft acquired a licence to print money – which it has been doing ever since.

Allen’s account of his time at Microsoft and of his complex relationship with Gates makes riveting reading. Their personalities and talents were in some ways complementary, and in other ways irreconcilable. Allen portrays himself as more laid-back – and in some ways more innocent – than Gates. He reminds us that his father was an unworldly librarian, whereas Gates’s was a big-time lawyer.

Allen was shocked when Gates proposed that ownership of their fledgling enterprise should be split 60/40 rather than the equal shares that Allen envisaged – and he was equally shocked later when Gates changed it to 64/36. But he went along with it. In the end, he left because he was tired of playing “Mr Slow Burn, like Walter Matthau to Bill’s Jack Lemmon”.

After Microsoft, Allen seems to have drifted, and so does his narrative. He started a software company, bought a basketball team and then a football team, commissioned a series of inexplicably lavish yachts and made a series of eccentric and sometimes unwise investments – in AOL, Ticketmaster, cable TV and the DreamWorks movie studio, for example. He discovered, to his cost, that Hollywood’s mantra is “Give us your money, and we’ll introduce you to some interesting people. But we really don’t want your input”. He set up an institute for mapping the human brain, gave $1bn to charitable causes and played his electric guitar a lot. His memoir is that of a talented, reasonable soul who played a key role in one of the great corporate successes of the 20th century. And it leaves one with the encouraging thought that while nice guys usually finish last, they don’t always finish poor.

Be the first to review “Idea Man : A Memoir by the Cofounder of Microsoft” Cancel reply