Shop - Humans Are Underrated : What High Achievers Know That Brilliant Machines Never Will 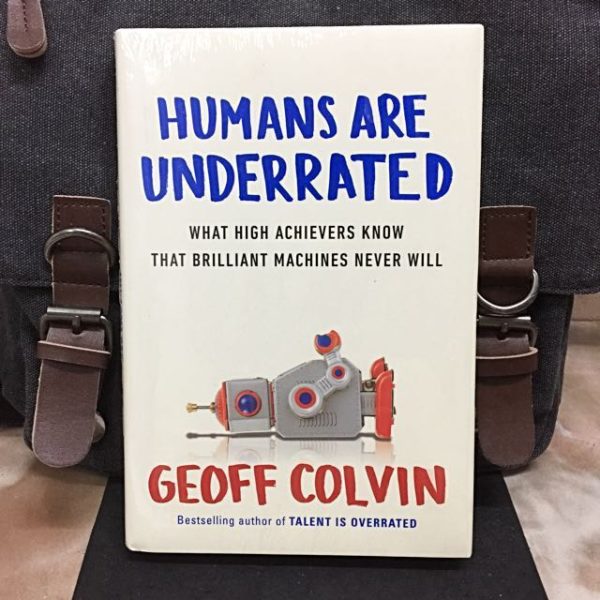 Humans Are Underrated : What High Achievers Know That Brilliant Machines Never Will

The Viral Storm : The Dawn Of A New Pademic Age

The Sell :The Secrets Of Selling Anything To Anyone
Geoff Colvin
Brand-new, Hardcover

The Importance of Irreplacable Quality of Human Elements

This International and insightful bestseller in hardcover edition is a bran-new book and still wrapped with new-book plastic wrapper. The original new book is sold at usual price RM126.19 (Hardcover). Now here Only at RM32.

As technology races ahead, what will people do better than computers?

What hope will there be for us when computers can drive cars better than humans, predict Supreme Court decisions better than legal experts, identify faces, scurry helpfully around offices and factories, even perform some surgeries, all faster, more reliably, and less expensively than people?

From the bestselling author of Talent is Overrated, an extensive look at the essential human skills that can never be replaced by technology.
It’s easy to imagine a nightmare scenario in which computers simply take over most of the tasks that people now get paid to do.

The unavoidable question—will millions of people lose out, unable to best the machine?—is increasingly dominating business, education, economics, and policy.

The bestselling author of Talent Is Overrated explains how the skills the economy values are changing in historic ways. The abilities that will prove most essential to our success are no longer the technical, classroom-taught left-brain skills that economic advances have demanded from workers in the past.

The real issue is what we humans are hardwired to do for and with one another, arising from our deepest, most essentially human abilities—empathy, social sensitivity, storytelling, humor, forming relationships, creativity. These are how we create value that all people hunger for, that is unique and not easily quantified.

Instead, our greatest advantage lies in what we humans are most powerfully driven to do for and with one another, arising from our deepest, most essentially human abilities—empathy, creativity, social sensitivity, storytelling, humor, building relationships, and expressing ourselves with greater power than logic can ever achieve. This is how we create durable value that is not easily replicated by technology—because we’re hardwired to want it from humans.

These high-value skills create tremendous competitive advantage—more devoted customers, stronger cultures, breakthrough ideas, and more effective teams. And while many of us regard these abilities as innate traits—“he’s a real people person,” “she’s naturally creative”—it turns out they can all be developed. They’re already being developed in a range of far-sighted organizations, such as:
● the Cleveland Clinic, which emphasizes empathy training of doctors and all employees to improve patient outcomes and lower medical costs;
● the U.S. Army, which has revolutionized its training to focus on human interaction, leading to stronger teams and greater success in real-world missions;
● Stanford Business School, which has overhauled its curriculum to teach interpersonal skills through human-to-human experiences.

As technology advances, we shouldn’t focus on beating computers at what they do—we’ll lose that contest. Instead, we must develop our most essential human abilities and teach our kids to value not just technology but also the richness of interpersonal experience.

They will be the most valuable people in our world because of it. Colvin proves that to a far greater degree than most of us ever imagined, we already have what it takes to be great.

They’re discovering also that while many of us regard these abilities as innate traits—“he’s a real people person,” “she’s naturally creative”—it turns out they can all be developed and are being developed in far-sighted organizations from software firms to the U.S. Army to the Cleveland Clinic. To a far greater degree than most of us ever imagined, we already have what it takes.

The balance of the book does a good job of showing the power of empathy in the new economy, especially for large, dynamic organizations. The latter chapters are thought provoking, especially for anyone leading distributed teams.

If the prospect sounds worrying, it shouldn’t. On the contrary, it’s wonderful news. Just think of what we’re being asked to do—to become more essentially human, to be the creatures we once were and were always meant to be. Odd as it may sound, that’s a significant change from what we’re used to. For the past 10 generations in the developed world, and shorter but still substantial periods in many emerging economies, most people have succeeded by learning to do machine work better than machines could do it. Now that era is ending. Machines are increasingly doing such work better than we ever could. We face at least the opportunity to create new and better lives.

Staking our futures to our profoundest human traits may feel strange and risky. Fear not. When you change perspectives and look inward rather than outward, you’ll find that what you need next has been there all along. It has been there forever.

In the deepest possible sense, you’ve already got what it takes. Make of it what you will.

About the Author
GEOFF COLVIN, Fortune’s senior editor at large, is one of America’s most respected journalists. He lectures widely and is the regular lead moderator for the Fortune Global Forum. He also appears daily on the CBS Radio Network, reaching seven million listeners each week. His previous book, Talent is Overrated, was a national bestseller and has been translated into a dozen languages.

Be the first to review “Humans Are Underrated : What High Achievers Know That Brilliant Machines Never Will” Cancel reply