Shop - Hubris : Why Economists Failed to Predict the Crisis and How to Avoid the Next One 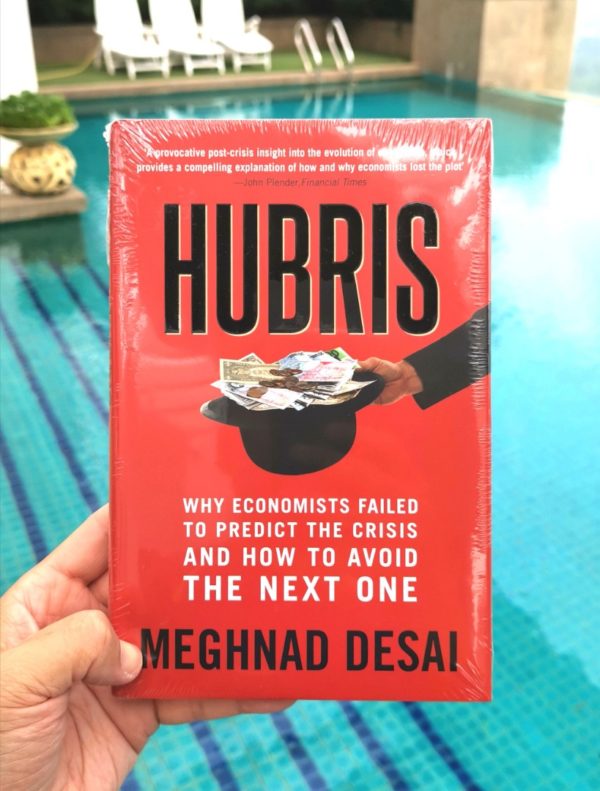 Hubris : Why Economists Failed to Predict the Crisis and How to Avoid the Next One

Top of Mind: Use Content to Unleash Your Influence and Engage Those Who Matter To You

That’s Not How We Do It Here! : A Story about How Organizations Rise and Fall–And Can Rise Again
Meghnad Desai
Brand-new, Hardcover

An interesting read for the people who want to understand about what, how and why of the financial crisis.

The economics profession has been in disrepute ever since the transatlantic economies slipped into a crisis and pulled global growth down.

China, the best performing economy of the past decade, has not yet produced a Nobel Prize winner in the discipline, while Europe, home to so many Nobel laureates in economics, is unable to stabilise itself.

Clearly, there is something as wrong with the economies of the West as with their economics.

In seeking to answer the twin questions of why (most) economists were taken by surprise by the crash of 2008 and what can be done to avert a repeat, Desai goes digging in the history of economic thought.

The Great Financial Crisis of 2008 had large social and economic repercussions that left many asking why such a devastating event was not predicted.

That very question is the focal point of Hubris by the internationally renowned economist, Meghnad Desai.

Desai attempts to provide a definitive answer by investigating the evolution of economics – mapping its trajectory against the occurrence of major political events – and in so doing makes his case for how to avoid another catastrophe like the one we saw in 2008.

The failure of economists to anticipate the global financial crisis and mitigate the impact of the ensuing recession has spurred a public outcry.

Economists are under fire, but questions concerning exactly how to redeem the discipline remain unanswered.

In this provocative book, renowned economist Meghnad Desai investigates the evolution of economics and maps its trajectory against the occurrence of major political events to provide a definitive answer.

Desai underscores the contribution of hubris to economists’ calamitous lack of foresight, and he makes a persuasive case for the profession to re-engage with the history of economic thought.

Desai’s argument is simple. Economics, or rather ‘political economy ‘, as the discipline was originally called, developed as an intellectual attempt at understanding the way goods and services are produced, traded and consumed, and incomes are generated and distributed.

It was a study of the practical world. Yet, in seeking to be regarded a ‘science’, economics not only became far too mathematical in exposition but also mechanical in its understanding and interpretation of human behaviour and social organisation. Relevance to an understanding of the real world was sacrificed at the altar of technique.

He dismisses the notion that one over-arching paradigm can resolve all economic eventualities while urging that an array of already-available theories and approaches be considered anew for the insights they may provide toward preventing future economic catastrophes.

With an accessible style and keen common sense, Desai offers a fresh perspective on some of the most important economic issues of our time.

The book also offers a fascinating ride on the evolution of economics, the key academicians and their economic theories, cause of the financial crisis, why economists were not able to notice the crisis and finally on how to avoid the future crisis.

The book is an important contribution to contemporary economics as well as the history of economic thought
Desai sees the global economic slowdown following the Lehman collapse and the transatlantic financial crisis in 2008 as the beginning of the downswing of a Kondratieff cycle, after the 1992-2007 boom period.

Hence, his prognosis for economic growth over the next decade: things will go down before going up again.

What makes the current cycle different from the four cycles of the 19th and 20th centuries is the rise of China and other Asian economies.

Can growth in these economies, and the innovation cycle in the US lift the global economy up? The prognosis for Europe is bleak, but there is hope for Africa.

The only weakness in Desai’s argument is an inadequate appreciation of the role of public policy. Can policymakers learn from the past and intervene so as to modulate the impact of Kondratieff and other shorter-term (Juglar and Kitchin) cycles?

It is possible that Desai would suggest that economic policymakers must first relearn their economics if they have to come up with relevant solutions.

Desai’s book is an important contribution to contemporary economics as well as the history of economic thought that many will greatly profit from reading.
———————————————————————–
A strategic Review by GHATOTKACHSERIES:

The author Meghnad Desai, is a Professor Emeritus of The London School of Economics (LSE), Lord of the realm, Bollywood movie/music buff, a distinguished British/Gujarati economist named interestingly, after a towering Bengali mathematician.

Desai is also a popular talking head on Indian TV, adviser to the British government on its monetary policy and financial institutions, columnist, author, well regarded by his peers in academics both for his erudition and intellectual honesty. With his distinctive mane of hair and affable mien, Meghnad Desai is indeed a man of many parts.

HUBRIS may be a short book, but it is magisterial in terms of Desai’s deft grasp of European and American economic theory from the dawn of the modern era, meaning, Meghnad style, around the 1500s.

He points out the postulates of the early economic theorists, elements of whose ideas, most notably the search for economic ‘equilibrium’, are quite often carried over to the present day, but these notions are from an era when the commercial world was a very different place.

Desai writes fascinatingly of ‘cycles’ that seem to occur as an inevitability in all economic endeavour, much before the 1870s, when economics ‘had become a professional subject’.

The meditation of this book is how to influence if not control these seemingly involuntary cycles, that can create both great prosperity and havoc in the lives of people around the world.

Many rather cosy theories fuelled by the realities of imperialism and colonialism persisted for a century under the ‘Pax Brittanica’, although every other major European power was working the same logic, with varying degrees of success. Everything changed however with the cataclysmic paroxysm of WWI in 1914.

The famous John Maynard Keynes makes an appearance soon after. Desai clearly likes him: ‘He did not stay in his ivory tower and pen articles and books.

He was a man of affairs-speculator in the stock market, chairman of an insurance company, journalist, author of a bestseller, civil servant, controversialist, patron of the arts, husband of a ballerina, Fellow of King’s College, Cambridge’. ‘Controversialist’ is a word Desai seems to have coined just for Keynes.

Keynes found the nostrum for the Great Depression of the 1930s. But something similar or worse seems to be lurking about, threatening the world once more in 2015, wages of sin for decades of debt fuelled growth. Desai seems to suggest a combination of manoeuvres may save the world, in case disaster strikes, rather than any one all-encompassing formula.

Keynes was the first to advocate government spending on projects that employed many people, because they would collectively foster a consumption boom as they spent their wages. ‘The money would circulate’ as Desai paraphrases the Keynesian outcome, and the goal was ‘full employment’, as near as possible.

It was also Keynes who coined phrases such as ‘propensity to consume’ inspired by psychologist Sigmund Freud, and ‘the exotic notion of animal spirits’, the unleashing of which is the ambition of everyman’s economic policy to this day.

Still, Keynesian economics, from the 1920s and 1930s, that persisted through WWII and the post war boom, particularly in America, is no longer thought of as the Holy Grail.

The ‘Achilles heel of Keynesian policy was inflation’ greatly aggravated by the ‘oil shock’ because the price had not risen for fifty years till 1973.

And then, in one year, the price of oil quadrupled in 1973! The boom and bust cycles were back with a vengeance. And this was accelerated by the ‘influence of speculation’.

In 2008, ‘on the eve of its bankruptcy, three different potential purchasers were trying to read the accounts of Lehman Brothers and were none the wiser as to the assets/liabilities situation.’

And so, as Desai puts it: ‘If the model admits no possibility of failure of prediction, and the regulator accepts the model’s assumptions, the results are that both the poacher and the gamekeeper will lose’. The ‘malaise’ is embedded ‘in the theory’.

The ongoing eurozone crisis began in 2010 and is the ‘second leg of the crisis that had started with the collapse of Lehman Brothers’. What is the solution? Some, like post-Keynesian economist Hayek, say ‘deleveraging’ is the answer.

But of course, this is another name for austerity, and imposing it is easier said than done for the pain it causes.

Besides, this time around, all the liquidity at near zero rates of interest cannot seem to raise the inflation rate off the floor in the West!

Meghnad Desai says the government in Europe are trying to stoke inflation but admits that the outcomes per earlier economic theorists have changed.

Desai’s HUBRIS is in his own words ‘a journey through the history of economic ideas,’ an exploration and recounting, without claiming to have all the answers.

The economic cycles afoot, according to Desai, are actually more like three concentric rings working simultaneously, and together.

There is a long cycle, perhaps 70 years or more, postulated by economists such as Kondratieff and Schumpeter, a shorter cycle ‘in the income shares of wages and profits’, of some ten years duration, put forward by economists Marx-Goodwin, yes the Marx; and a shorter one still, ‘caused by the gap between the market rate of interest and the natural rate’, theorised upon by economists Wicksell and Hayek.

Meghnad gives an interesting account of how these cycles may have worked in the past, via the clarity of hindsight. He thinks Europe and America are currently in a Kondratieff style downswing, to last for the next twenty five years to come, with growth rates that will be much lower, at 1 to 3%, than the boom rates of 1992-2007 that were as high as 6 to 7%.

The emerging markets, including India and China, will grow much faster, in comparison, though China has now slowed from double digits to around 7% .
The last word from Desai is: ‘Capitalism is a dynamic system but it works through creating cycles and crises. It is a disequilibrium system’.

And to sign off, he quotes the old discredited bug-bear Karl Marx: ‘Mankind sets itself only such tasks as it is able to solve,’ before saying, on his own bat: ‘We shall solve the problems yet. No one can say just how’.

About the Author
Meghnad Desai is emeritus professor of economics, London School of Economics, where he was also founder and former director of the Global Governance Research Centre. He is a member of the House of Lords and chairman of the Advisory Board at the Official Monetary and Financial Institutions Forum. He lives in London.

Be the first to review “Hubris : Why Economists Failed to Predict the Crisis and How to Avoid the Next One” Cancel reply