Shop - How We Got to Now : Six Innovations That Made the Modern World 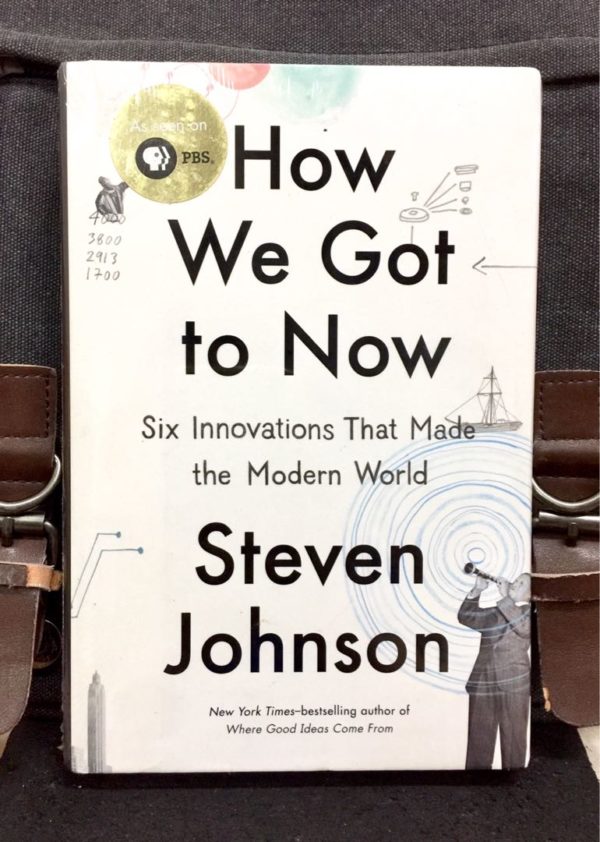 How We Got to Now : Six Innovations That Made the Modern World

Messy : How To Be Creative And Resilient In A Tidy-Minded World

How Innovations In 6 Different Fields Shaped Our Civilization World

This New York Times bestseller in hardcover edition is a bran-new book and still wrapped with new-book plastic wrapper. The original new book is sold at usual price RM133.88 (Hardcover). Now here Only at RM32.

From the New York Times–bestselling author of Where Good Ideas Come From and Everything Bad Is Good for You, a new look at the power and legacy of great ideas.

In this illustrated history, Steven Johnson explores the history of innovation over centuries, tracing facets of modern life (refrigeration, clocks, and eyeglass lenses, to name a few) from their creation by hobbyists, amateurs, and entrepreneurs to their unintended historical consequences.

Filled with surprising stories of accidental genius and brilliant mistakes—from the French publisher who invented the phonograph before Edison but forgot to include playback, to the Hollywood movie star who helped invent the technology behind Wi-Fi and Bluetooth—How We Got to Now investigates the secret history behind the everyday objects of contemporary life.

● how the invention of air-conditioning enabled the largest migration of human beings in the history of the species—to cities such as Dubai or Phoenix, which would otherwise be virtually uninhabitable;
● how pendulum clocks helped trigger the industrial revolution;

● and how clean water made it possible to manufacture computer chips.

How We Got to Now is also a British-American factual television series that was broadcast on PBS in 2014 and BBC Two in 2015.

The series was commissioned by the BBC in the United Kingdom and made by Nutopia, a British-American production company in the United States.

The six-part series, presented by Steven Johnson, explores the legacy of great ideas. Episode titles for the six parts are:

Accompanied by a major six-part television series on PBS, How We Got to Now is the story of collaborative networks building the modern world, written in the provocative, informative, and engaging style that has earned Johnson fans around the globe.

Johnson’s long view of how innovations in 6 different fields shaped our civilization takes traces them from their original uses & discoveries through their current uses.

It’s an often amazing journey as he points out huge changes made possible by them & the odd consequences in other portions of our lives that we normally wouldn’t associate with them.

The Wall Street Journal did a good review here:

1. GLASS – from King Tut’s jewelry to dishes to lenses, glass has certainly been one of our oldest & most important arts. Lenses meshing with the printing press for glasses eventually led to the microscope & telescope, expanding our views immeasurably. Its use as building & communication materials is even more astonishing.

2. COLD – is even more interesting in the way it blossomed in just the past couple of centuries & has caused huge shifts in economics & populations through food storage & habitability. Birdseye & Carrier transformed our food & living spaces.

3. SOUND – told me that the cave paintings might have been more for marking spots for the best sound than for art. Turns out even dabs of color in the Lascaux caves in France were mapped to the best echo spots, so it has a much older heritage than I’d previously thought. Even so, things really got hopping in the last century or two as we turned it into electric.

A recurring theme is that inventions & innovations are generally not light bulb moments of geniuses, but built on the thoughts & tech of the times with a lot of hard work, odd consequences, & failure. Sound illustrates this very well. Martinville’s phonoautograph in 1857 set the stage for Edison’s phonograph 2o years later & wasn’t used the way he imagined at all. Sonar was developed prior to WWI, spurred by the loss of the Titanic, but Langevin couldn’t get anyone interested & it wasn’t used even though it could have saved thousands from U boats far more cheaply than any other method. Certainly he never thought it would be used for sonograms.

Unintended consequences: …By the end of the decade, the sex ratio at birth in hospitals throughout China was almost 110 boys to every 100 girls, with some provinces reporting ratios as high as 118:100. This may be one of the most astonishing, and tragic, hummingbird effects in all of twentieth-century technology…
The normal ratio is 105:100 in the US which makes the statistic a little less tragic. Scientists don’t really know what drives the difference in the sex ratio in most cases, although China’s is a fact.

4. CLEAN – the past was filthy & now we’ve gotten to the point where we can make things too clean. The clean up of cities was amazing. I read The Ghost Map: The Story of London’s Most Terrifying Epidemic – and How It Changed Science, Cities, and the Modern World, also by Johnson, so knew some of this section. I hadn’t realized the entire city of Chicago was jacked up, though. That 3 billion people still live in squalor is ridiculous.

5. TIME – was interesting, although I’ve read about it before, especially the difficulties in navigation before the first clocks let us figure out longitude & now we use a similar method with GPS (time difference between 3 satellites). More interesting was the need for time accuracy in our daily lives as we industrialized & communicated faster. His examples of train schedules was excellent as were the explanations of how it got more accurate as technology progressed.

He also made a great example of how Edison was not a genius inventor on his own. He was one of the pioneers of having a team in various disciplines. Many others had the idea of the light bulb for decades, but his team came up with the best filament first & he was excellent at marketing.

6. LIGHT – was very expensive before the electric light. I was shocked by how expensive & what a difference it has made in our lives especially when coupled with other inventions. It was a byproduct of fire, our first great discovery, & yet didn’t change much for 100,000 years. Not much more than a century ago, we were hunting sperm whales to mine their heads for oil. Now we’re using lasers in an attempt to create a sun.

It is highly recommended . It was very well read & would be an excellent read for anyone. Johnson even engages in some what-if scenarios. There are a lot ideas here that show just how amazing & odd our history is, especially in the past couple of centuries. Indeed, we’ve come a long way.

The unpredictable consequences of new discoveries is interesting and explaining it through history made it resonate much more, it really humanized the people being talked about.

Readers really appreciate the author’s discussion about what actually helps people make these leaps and ideas that revolutionize everything because it’s one that even though I see acknowledged more often now isn’t as widely believed.

Which is awful because it holds people back from doing amazing things because they have a faulty view of how progress really works.

You really enjoyed the book though, if you liked Freakonomics you’d probably like reading this one also, it utilizes the same out of the box thinking.

About the Author
Steven Johnson is the author of the bestsellers Where Good Ideas Come From, The Invention of Air, The Ghost Map, Everything Bad Is Good for You, Mind Wide Open, Emergence, and Interface Culture, and is the editor of the anthology The Innovator’s Cookbook. He is the founder of a variety of influential websites and writes for Time, Wired, The New York Times, and The Wall Street Journal. Johnson lives in Marin County, California, with his wife and three sons.

Be the first to review “How We Got to Now : Six Innovations That Made the Modern World” Cancel reply