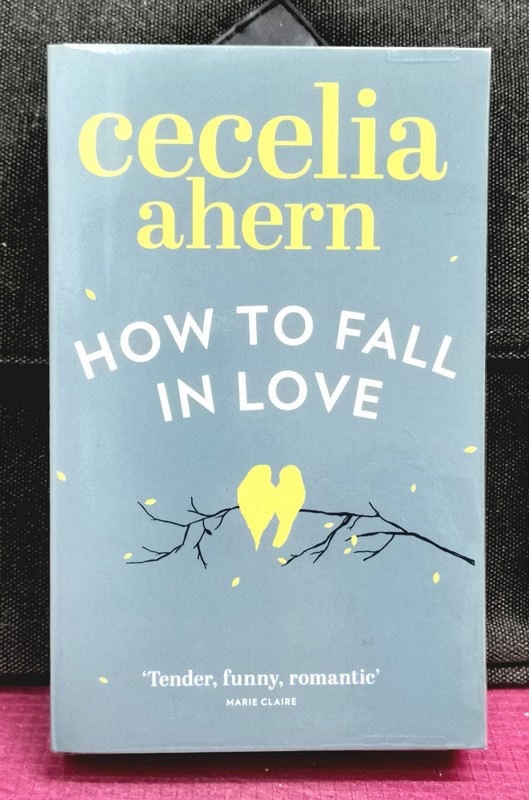 HOW TO FALL IN LOVE : A Novel

GET THE TRUTH : Former CIA Officers Teach You How To Persuade Anyone To Tell All

An Inspiring Story Fiction About Living Your Life, Falling In Love And Doing What Makes You Happy

An emotional, captivating and ultimately uplifting novel from this uniquely talented author.

In an age, where countless people are unhappy and dissatisfied with life, “How to Fall in Love” is a must read for everyone as it will make you laugh and understand life from a different perspective.

This is definitely one of Ahern’s best works and she has used her wonderful story telling abilities to highlight a problem which is very real. And as Cecelia in the voice of Christine Rose so wonderfully put it:
“Moments are precious; sometimes they linger and other times they’re fleeting, and yet so much could be done in them; you could change your mind, you could save a life and you could even fall in love”

She has just two weeks. Two weeks to teach him how to fall in love – with his own life.

Adam Basil and Christine Rose are thrown together late one night, when Christine Rose is crossing the Ha’penny Bridge in Dublin late one night when she sees a stranger, Adam is there, poised to jump. Desperate to help, she talks him into a reckless deal: if he gives her two weeks – till his 35th birthday – she’ll prove that life is worth living.

Despite her determination, Christine knows what a dangerous promise she’s made. Against the ticking of the clock, the two of them embark on wild escapades, grand romantic gestures and some unlikely late-night outings. Slowly, Christine thinks Adam is starting to fall back in love with his life.

But as the clock ticks and the two of them embark on late-night escapades and romantic adventures, what Christine has really promised seems impossible… But has she done enough to change his mind for good? And is that all that’s starting to happen?

Christine and Adam are thrown together on the night she stops his suicide attempt on Dublin’s Halfpenny Bridge. Having only recently felt that she failed to stop another man from committing suicide, Christine is determined to ‘fix’ Adam.

He gives her a deadline of his birthday to convince him life is worth living, which she soon discovers is in just two weeks time. At first, it is Christine who is meant to be saving Adam, but it soon becomes clear that Adam might just be saving Christine too …

Christine is a long-time self-help book aficionado who has just walked out on her husband after realising she didn’t love him. She is from a slightly bonkers but loving family, who hold their own secrets, as we will gradually discover.

Accustomed to usually being the saviour of others, including her best friend and her clients at her recruitment firm with a difference, Christine has found herself in a rather hopeless situation following her marriage breakup. Meeting Adam gives her a project to focus on, but has she taken on more than she can handle?

Adam is quite possibly the most handsome man that Christine has ever met. He is the soon to be heir to Basil Chocolates, a famous Irish Chocolatier, but it is not a position that he wants. Recently, he has also lost the job he loved, his father is dying and he has just discovered that his girlfriend – who he was about to propose to – has run off with his best friend.

Adam certainly has a number of issues that brought him to Christine on the Halfpenny Bridge that night, and she has her work cut out trying to help him rediscover the joy in life, whilst unexpectedly learning how to fall in love herself …

A novel to make you laugh, cry and appreciate life, this is Cecelia Ahern at her thoughtful and surprising best.

Ahern delivers again, masterfully tackling a difficult subject and making it a joy to read. How to Fall in Love is a beautifully written and thoughtful novel with more than a few moments of humour and an underlying message to take away with you. Many were left with a renewed sense of faith in humanity, the determination to appreciate life more – and a developing interest in self-help books!

After completing a degree in Journalism and Media Communications, Cecelia wrote her first novel at 21 years old. Her debut novel, PS I Love You was published in January 2004, and was followed by Where Rainbows End (aka Love, Rosie) in November 2004. Both novels were adapted to films; PS I Love You starred Hilary Swank and Gerard Butler, and Love, Rosie starred Lily Collins and Sam Claflin.

Cecelia has published a novel every year since then and to date has published 15 novels; If You Could See Me Now, A Place Called Here, Thanks for the Memories, The Gift, The Book of Tomorrow, The Time of My Life, One Hundred Names, How To Fall in Love, The Year I Met You, The Marble Collector, Flawed, Perfect and Lyrebird.

To date, Cecelia’s books have sold 25 million copies internationally, are published in over 40 countries, in 30 languages. Along with writing novels, Cecelia has co-created the US ABC Comedy Samantha Who? and has created many other original TV projects.

Cecelia’s next book is a collection of 30 short stories about 30 women, titled ROAR. ROAR will be published in the UK and Ireland in Autumn 2018 by HarperCollins UK, and in Spring 2019 in the US by Grand Central Publishing.

“At the age of 19 I experienced a difficult time in my life, and as I have done since childhood and throughout my teenage years, I turned to writing to process my feelings. PS I Love You was born from my feelings of sadness, fear and loss of my identity. I poured my heart into the story of a woman suffering from grief after the loss of her husband, a woman who had hit the lowest point of her life and was struggling with both the desire and the ability to find her way out of the fog. Writing Holly’s journey helped me find my own path, writing PS I Love You brought both Holly and I to a more positive place in our lives and that is what I continue to do with my novels.

The thread that links my work is in capturing that transitional period in people’s lives. I’m drawn to writing about loss, to characters that have fallen and who feel powerless in their lives. I am fascinated and inspired by the human spirit, by the fact that no matter how hopeless we feel and how dark life can be, we do have the courage, strength and bravery to push through our challenging moments.

We are the greatest warriors in our own stories. I like to catch my characters as they fall, and bring them from low to high. My characters push through and as a result evolve, become stronger and better equipped for the next challenge that life brings. I like to mix dark with light, sadness with humour, always keeping a balance, and always bringing the story to a place of hope.”