Shop - Go Wild : Free Your Body And Mind From The Afflications Of Civilization 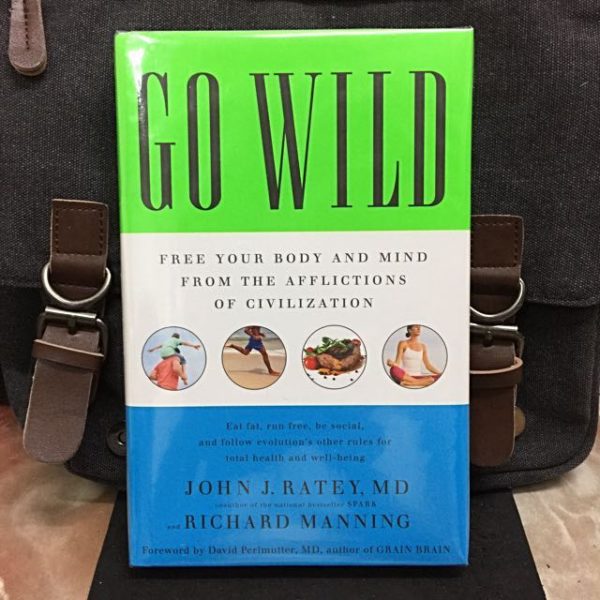 Go Wild : Free Your Body And Mind From The Afflications Of Civilization

The Network Always Wins : How to Influence Customers, Stay Relevant, and Transform Your Organization to Move Faster Than Market

How To Live Happier & Healthier By Returning To More Natural Way Of Living,

This empowering health and well-being bestseller in hardcover edition is a bran-new book and still wrapped with new-book plastic wrapper. The original new book is sold at usual price RM109.28 (Hardcover). Now here Only at RM25.

The scientific evidence behind why maintaining a lifestyle more like that of our ancestors will restore our health and well-being.

We’ve seen a great a rise in diabetes, asthma, obesity, and other “diseases of civilization” during the past century.In Go Wild, John J. Ratey, a professor of psychiatry at Harvard Medical School, and Richard Manning, a journalist, trace the roots of such problems much further back, to the dawn of agriculture.

Before that, they argue, evolution brought hunter-gatherers into fine, healthy attunement with their natural environs; afterward, Homo sapiens became more sedentary, and we began to eat things (especially starches and sugars) that wreaked havoc on our bodies. “We are designed to be wild,” they proclaim, “and by living tamely we make ourselves sick and unhappy.”

One food we ate that was good for us was salmon, because as the fish traveled far through seas and rivers, they developed bodies dense with valuable nutrients. Similarly, these authors range wide in their thinking, and though their volume is slim, it’s lucid, forceful, and packed with fascinating, thought-provoking ideas and people.

We meet neurosciences and !Kung tribes people, sleep researchers and students at a school with an unusual approach to treating autism—not to mention a modern biologist who tried (and nearly managed) to run down an antelope in order to test the methods of ancient hunters.

The authors offer specific exercise and diet prescriptions—trail running stimulates your brain and body much more effectively than treadmills; don’t eat sugar, bread, or pasta—but they warn against single-minded fixes. Instead, they promote longer sleep, greater exposure to nature, more varied movement, and a holistic bundle of other “instructions for re-wilding your life.”

This mismatch affects every area of our lives, from our general physical health to our emotional well-being. Investigating the power of living according to our genes in the areas of diet, exercise, sleep, nature, mindfulness and more, GO WILD examines how tapping into our core DNA combats modern disease and psychological afflictions, from Autism and Depression to Diabetes and Heart Disease. By focusing on the ways of the past, it is possible to secure a healthier and happier future, and GO WILD will show you how.

Although civilization has rapidly evolved, our bodies have not kept pace to fit our modern lifestyle. This mismatch affects every area of our lives, from our general physical fitness to our overall happiness. Go Wild present startling scientific evidence that maintaining a lifestyle more like that of our ancestors will restore our health and well-being.

Investigating the power of living according to our genes in the areas of diet, exercise, sleep, nature, mindfulness and more.

They uncover the surprising ways in which the body and the environment are connected. Your mood disorder may be directly relatec to your exercise routine or diet, and your weight issues may be linked to bacteria, lack of sleep oe even your maternal grandmother’s low birth weight. Armed with scientific research, remarkable case studies, and practical advice, Ratey and Manning reveal that our best defense against the afflictions of civilization is to “Go Wild”.

Of the many great anecdotes, one stands out to many readers:
“Earlier in their evolutionary history, koala bears ate a diverse diet and had larger brains. Later, they specialized on one food source and took up a sedentary lifestyle munching on eucalyptus leaves. Without the need to move around and search for food, their brains were a waste of metabolic energy, so they began to shrink. Today, koalas have tiny brains rattling around in oversized craniums.”

Don’t be a koala. Read this book.

About the Author
John Ratey, M.D. is a clinical professor of psychiatry at Harvard Medical School. He is the author of numerous bestselling and groundbreaking books, including Spark, Driven to Distraction, and A User’s Guide to the Brain. He lives in Cambridge, Massachusetts.

Richard Manning is an award-winning journalist. He is the author of eight books, including One Round River. His work has appeared in Best American Science and Nature Writing 2010, Harper’s, the New York Times, the Los Angeles Times, and other publications.

Be the first to review “Go Wild : Free Your Body And Mind From The Afflications Of Civilization” Cancel reply