Shop - Giving : How Each of Us Can Change the World 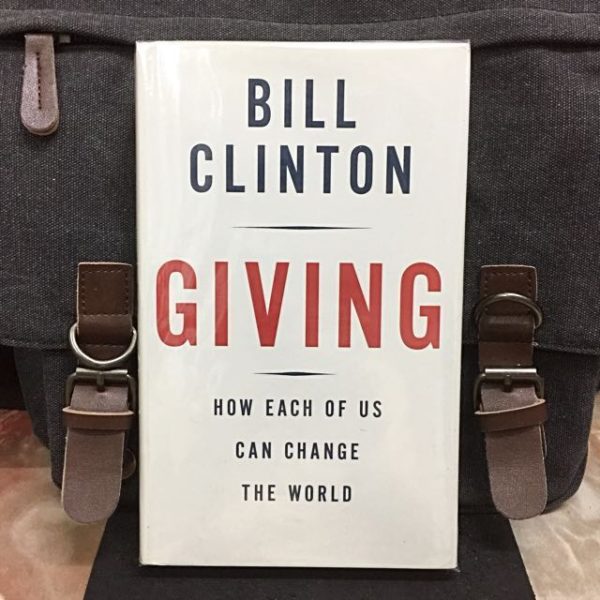 Giving : How Each of Us Can Change the World

The Sell :The Secrets Of Selling Anything To Anyone

How Anyone Can Make A Difference in Society Through The Life-Changing Act Of Giving.

This New York Times bestseller in hardcover edition is a Preloved book in excellent condition and nicely wrapped with protective book-wrapper. The original new book is sold at usual price RM110.03 (Hardcover). Now here Only at RM19.

Here, from Bill Clinton, is a call to action.

Giving is an inspiring look at how each of us can change the world. First, it reveals the extraordinary and innovative efforts now being made by companies and organizations—and by individuals—to solve problems and save lives both “down the street and around the world.” Then it urges us to seek out what each of us, “regardless of income, available time, age, and skills,” can do to help, to give people a chance to live out their dreams.

Bill Clinton shares his own experiences and those of other givers, representing a global flood tide of nongovernmental, nonprofit activity.

These remarkable stories demonstrate that gifts of time, skills, things, and ideas are as important and effective as contributions of money. From Bill and Melinda Gates to a six-year-old California girl named McKenzie Steiner, who organized and supervised drives to clean up the beach in her community, Clinton introduces us to both well-known and unknown heroes of giving.

Among them:
● Dr. Paul Farmer, who grew up living in the family bus in a trailer park, vowed to devote his life to giving high-quality medical care to the poor and has built innovative public health-care clinics first in Haiti and then in Rwanda;

● A New York couple, in Africa for a wedding, who visited several schools in Zimbabwe and were appalled by the absence of textbooks and school supplies. They founded their own organization to gather and ship materials to thirty-five schools. After three years, the percentage of seventh-graders who pass reading tests increased from 5 percent to 60 percent;’

● Oseola McCarty, who after seventy-five years of eking out a living by washing and ironing, gave $150,000 to the University of Southern Mississippi to endow a scholarship fund for African-American students;

● Andre Agassi, who has created a college preparatory academy in the Las Vegas neighborhood with the city’s highest percentage of at-risk kids. “Tennis was a stepping-stone for me,” says Agassi. “Changing a child’s life is what I always wanted to do”;

● Heifer International, which gave twelve goats to a Ugandan village. Within a year, Beatrice Biira’s mother had earned enough money selling goat’s milk to pay Beatrice’s school fees and eventually to send all her children to school—and, as required, to pass on a baby goat to another family, thus multiplying the impact of the gift.

Clinton writes about men and women who traded in their corporate careers, and the fulfillment they now experience through giving.

He writes about energy-efficient practices, about progressive companies going green, about promoting fair wages and decent working conditions around the world.

He shows us how one of the most important ways of giving can be an effort to change, improve, or protect a government policy. He outlines what we as individuals can do, the steps we can take, how much we should consider giving, and why our giving is so important.

Bill Clinton’s own actions in his post-presidential years have had an enormous impact on the lives of millions. Through his foundation and his work in the aftermath of the Asian tsunami and Hurricane Katrina, he has become an international spokesperson and model for the power of giving.

“We all have the capacity to do great things,” President Clinton says. “My hope is that the people and stories in this book will lift spirits, touch hearts, and demonstrate that citizen activism and service can be a powerful agent of change in the world.”

Bookstore shelves are crammed with offerings by presidential candidates, but now we have the first book of the season by a candidate for first spouse. Bill Clinton titles his thin volume Giving because it extols the virtues of volunteering time and money to worthy causes. But it could just as well have been called Adjusting, as the former president seeks to define his new role while Hillary Rodham Clinton pursues his old office.

“Now that we’ve switched places,” he writes, it is his turn to influence events without government portfolio. And perhaps from a perch no man has ever occupied. In Giving, readers and voters in effect get a preview of what a Bill Clinton-run East Wing might look like — focused on fighting poverty, disease and climate change around the world and rallying the mighty and the meek to noble goals.

The notion of Bill Clinton taking on a secondary role as his wife leads a presidential campaign and, at least potentially, the country, has always been hard to imagine. For a man who has spent his life at the center of his own comet, it must be an enormous challenge to find the right place as another streaks toward the sun. Watching him on the campaign trail or on his book tour in recent days, it’s easy to see a certain restless quality that has yet to be fully harnessed. As he depicts it, Clinton since leaving office has transformed his life from “getting” to “giving.” Politics, he writes, “is a ‘getting’ business” — getting votes, support, contributions and so on.

“To balance the scales,” he says, he has devoted his post-presidency to giving (neatly skipping over the fact that he has spent a good part of the last six years getting $46 million in speaking fees). Mortality, he says, pushed him to this new goal. “After I narrowly escaped what could have been a fatal heart attack in 2004,” he writes, “I felt that way even more strongly.”

What he has produced in Giving is his own version of It Takes a Village, and with an initial print run of 750,000, Knopf clearly hopes to duplicate Hillary Clinton’s publishing success. (An unspecified portion of the proceeds will go to the causes mentioned in the book.) But Giving is not so much a book as an extended public service announcement masquerading as a book. It is essentially a long laundry list of efforts funded by the Clinton Foundation or admired by its founder, punctuated by entreaties to the reader to follow their example. They’re doing it, why can’t you? To explore why people devote time, money and energy to public causes, the author turns to celebrity friends such as Oprah Winfrey, Andre Agassi and Warren Buffett for a few sentences about how they realized it was better to give than to receive. He also gives shout-outs to some of his favorite fundraising and business buddies, such as supermarket mogul Ron Burkle and Indian businessman Rajat Gupta. And he strokes some who might be helpful to his wife’s campaign, lavishing praise, for instance, on his former vice president, Al Gore, who remains on the electoral sidelines with a potent following.

To be sure, Clinton recounts some truly inspiring stories, many of them already famous. There is Oseola McCarty, a retired cleaning lady in Mississippi who gave her life’s savings to the University of Southern Mississippi for a scholarship fund for poor African Americans. There is Paul Farmer, who grew up living in a trailer park, a boat and even a tent but graduated from Harvard Medical School and went on to devote his life to fighting AIDS and tuberculosis in destitute places around the world. And there is, eventually, Bill Clinton. He resists for 186 pages before succumbing to the temptation to recite the accomplishments of his (first?) eight years in the White House: a numbers-laden litany of how many millions of Americans now get family leave, safer drinking water, patients’ rights, college aid and immunization who wouldn’t have gotten it had a guy named Clinton not been president. Then he helpfully rattles off a five-point platform for the next president — whoever that might be — centered on terrorism, climate change, economic inequality, health care and energy. Yet if readers hope to learn more about Clinton’s own inner world in this fascinating time of political dynasty-building and gender reversal — and let’s face it, Knopf wouldn’t print three-quarters of a million copies if the name on the cover were John Smith — they will have to look elsewhere.

Beyond the stump speech, Clinton keeps his attention on his subjects and offers little in the way of personal introspection. In the end, one thing Giving doesn’t give us is enough insight into its author.

Be the first to review “Giving : How Each of Us Can Change the World” Cancel reply