Shop - Friend and Foe : When to Cooperate, When to Compete, and How to Succeed at Both 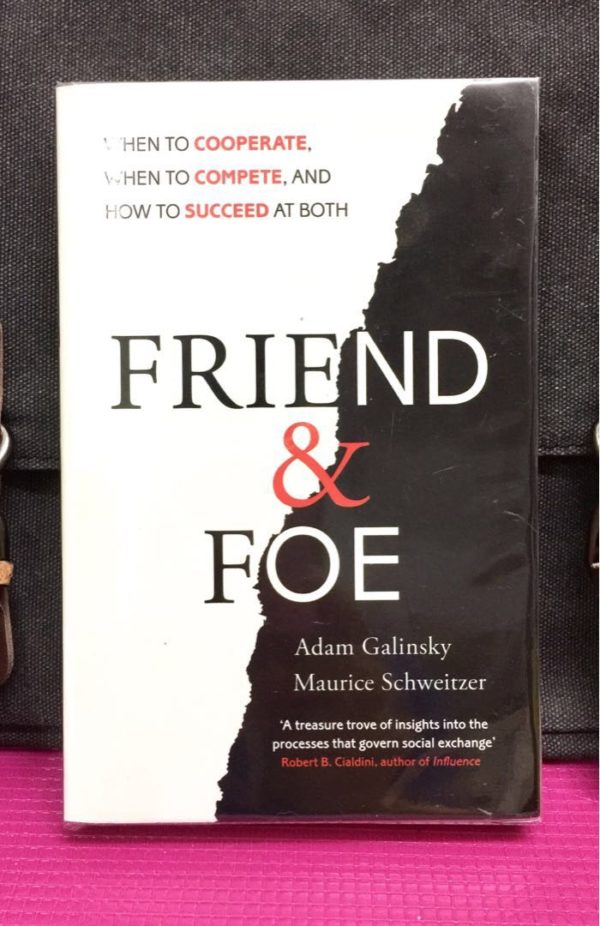 Friend and Foe : When to Cooperate, When to Compete, and How to Succeed at Both

Expecting Better : Why the conventional pregnancy wisdom is wrong and what you really need to know

This New York Times / The Guardian / Washington Post Bestseller in paperback edition is a preloved book and nicely wrapped with protective book-wrapper. The original new book is sold at usual price RM55.90.

Do we achieve our best outcomes by competing or by cooperating?

What does it take to succeed?

This question has fueled a long-running debate. Some have argued that humans are fundamentally competitive, and that pursuing self-interest is the best way to get ahead.

Others claim that humans are born to cooperate and that we are most successful when we collaborate with others.

In FRIEND AND FOE, researchers Galinsky and Schweitzer explain why this debate misses the mark.

Rather than being hardwired to compete or cooperate, we have evolved to do both.

In every relationship, from co-workers to friends to spouses to siblings we are both friends and foes.

It is only by learning how to strike the right balance between these two forces that we can improve our long-term relationships and get more of what we want.

Here, Galinsky and Schweitzer draw on original, cutting edge research from their own labs and from across the social sciences as well as vivid real-world examples to show how to maximize success in work and in life by deftly navigating the tension between cooperation and competition.

They offer insights and advice ranging from: how to gain power and keep it, how to build trust and repair trust once it’s broken, how to diffuse workplace conflict and bias, how to find the right comparisons to motivate us and make us happier, and how to succeed in negotiations – ensuring that we achieve our own goals and satisfy those of our counterparts.

Along the way, they pose and offer surprising answers to a number of perplexing puzzles: when does too much talent undermine success; why can acting less competently gain you status and authority, where do many gender differences in the workplace really come from, how can you use deception to build trust, and why do you want to go last on American Idol and in many interview situations, but make the first offer when negotiating the sale of a new car.

We perform at our very best when we hold cooperation and competition in the right balance.

This book is a guide for navigating our social and professional worlds by learning when to cooperate as a friend and when to compete as a foe—and how to be better at both.

Imagine going to to an orchestra performance. You are really looking forward to this occasion, as you have heard great things about the performers and the music they will be performing.

But as the first notes start playing, you realise something is off. The music is discordant, uncoordinated even, and the whole audience is in a state of confusion.

Disgruntled and frustrated, you leave the performance at half-time, having learned no more than before you got there.

For anyone wanting to learn about when to cooperate, and when to compete —a fundamental element of personal and career success — this is the state of academia confronting them.

Although a great deal of research has been done, and a great many insights gathered, the field is difficult to access for experts and lay people alike.

Until now, that is. Profs. Galinsky and Schweitzer, in their roles as conductors of the orchestra, are able to weave together individual instruments and tones into a comprehensible melody.

And their contribution does not end at the role of conductor: this dream-team of researchers and writers have also been crucial in the development of some instruments and playing techniques in the orchestra metaphor, having written over 250 scientific articles on this very topic.

For some people, the key to success is competition — always looking after their self-interest and fighting to be better than others.

Others believe that success comes to those who are best at cooperation — who know how to collaborate with others.

In their new book, Friend & Foe: When to Cooperate, When to Compete and How to Succeed at Both, Galinsky and Schweitzer build on research from across the social sciences as well as advances in neuroscience to explain how the most successful people and successful relationships are those in which we find the right balance of both competition and cooperation.

We are always toggling between the two, although it is not easy. According to the authors, three fundamental forces — resources are scarce, humans are social beings and the social world is unstable and dynamic — give rise to an ongoing tension between competition and cooperation.

These three fundamental forces are the underlying threads that run throughout the book.

Why We Compare Ourselves to Others

A chapter that explores the role that social comparisons play in our lives illustrates how these forces impact cooperation and competition.

We are social beings, the authors write, and one way we figure our place in our dynamic world is by comparing ourselves with others. Such social comparisons can be motivating.

When the Soviets became the first country to fly a man in orbit, the United States felt it must do better; the result was the successful first mission to the moon.

Social comparisons, however, can also be destructive, as the attack of Olympic skater Tonya Harding on rival Nancy Kerrigan demonstrates.

Social comparisons help put our achievements in context, notably when scarce resources are involved. The authors cite one academic study that showed that people who graduate during a recession are happier with their first jobs than people who get their first jobs during an economic expansion.

During an economic downturn, graduates who get a job compare themselves to most other graduates, who aren’t able to get a job at all.

The authors offer three principles that help harness the power of social comparisons and make them work for us rather than bring us down. The first is to recognize the natural order of things in which most of us instinctively believe.

One example of this natural order is that older siblings should be successful first. The Williams sisters (and in another domain, John Kennedy and Robert Kennedy) worked well together, as the older sibling was the first to reach the heights of their profession.

The second principle is to recognize or create new opportunities to compete. Turn disappointment into motivation to do better next time. The third principle is to allow others to have some schadenfreude — some joy in someone’s misery.

After your incredible vacation to Fiji, the authors suggest, don’t forget to focus on the negatives as well (the rainy days, the lost luggage).

The chapter on social comparisons is the opening salvo of a fascinating exploration into how humans both collaborate and compete and how it’s possible to find that perfect balance between the two.

The authors cover a surprisingly wide range of issues, such as the role of “psychological safety” (the permission to speak up), that enable hierarchies to be productive rather than destructive; how to use both competence and warmth to build trust; and how women can compete without facing the unfair gender-stereotypical backlash of being too “hard” or “tough” — to name just three examples.

Filled with unforgettable stories, this is the ultimate guide for learning when to cooperate as a friend and when to compete as a foe.

Combined, Galinsky and Schweitzer have published over 250 scientific articles and chapters in the fields of management, psychology, and economics. Their work has been cited in The Economist, The New York Times, The Wall Street Journal, The Financial Times, The New Yorker, National Public Radio, and more.

Be the first to review “Friend and Foe : When to Cooperate, When to Compete, and How to Succeed at Both” Cancel reply