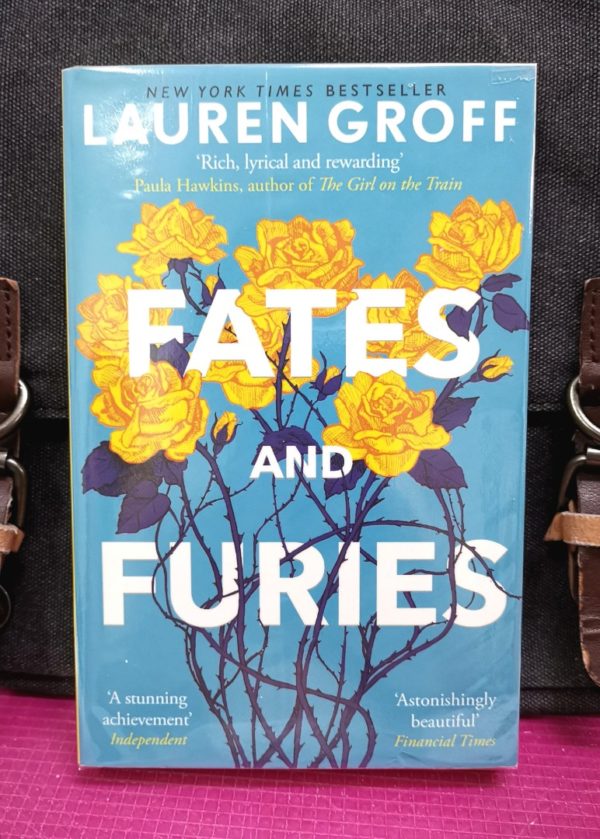 The Good Story: Exchanges on Truth, Fiction and Psychotherapy

★★ A FINALIST FOR THE NATIONAL BOOK AWARD ★★

Fates and Furies is a 2015 novel by American author Lauren Groff.It is Groff’s third novel and fourth book.

The book takes place in New York, and treats how the different people in a relationship can have disparate views on the relationship.

It has drawn comparisons to the novel Gone Girl, based on its themes, structure, and the dominance of the female in the key relationship of the plot.

Positive reviews called it “masterful” and negative reviews focussed on moments of implausibility in the novel’s second half.

The novel is influenced by Greek Mythology as deities and vengeance are themes throughout.

Fates and Furies is a literary masterpiece that defies expectation. A dazzling examination of a marriage, it is also a portrait of creative partnership written by one of the best writers of her generation.

Every story has two sides. Every relationship has two perspectives. And sometimes, it turns out, the key to a great marriage is not its truths but its secrets.

It’s the story of the marriage of two beautiful people; a marriage whose sparkling perfection and longevity is the envy of all. but no one knows what happens in a marriage behind closed doors. sometimes, not even its participants.

This is the story of the moving parts that keep a marriage going; the sacrifices and the machinations under the smooth facade. it’s about how much work it takes to make it look effortless. it’s about secrets.

At the core of this rich, expansive, layered novel, Lauren Groff presents the story of one such marriage over the course of twenty-four years.

At age twenty-two, Lotto and Mathilde are tall, glamorous, madly in love, and destined for greatness.

A decade later, their marriage is still the envy of their friends, but with an electric thrill we understand that things are even more complicated and remarkable than they have seemed.

With stunning revelations and multiple threads, and in prose that is vibrantly alive and original, Groff delivers a deeply satisfying novel about love, art, creativity, and power that is unlike anything that has come before it.

Profound, surprising, propulsive, and emotionally riveting, it stirs both the mind and the heart.

President Obama and Amazon named Lauren Groff’s word-of-mouth sensation Fates and Furies as their book of the year.

As with Gone Girl, it seems readers can’t resist a dark take on modern matrimony.

To qualify as the US book of the year – that ineffable title to which Lauren Groff’s third novel, Fates and Furies, lays persuasive claim – a novel needs more than just blockbuster sales.

In fact, the book that “everybody” seems to be reading often climbs no higher than a respectable but unspectacular slot on the bestseller list.

Still, people talk about it. Celebrities such as Sarah Jessica Parker, Carrie Brownstein and Miranda July are pictured on Instagram with it. Critics love it, or – even better – debate its merits.

Not only has Groff’s novel, by the Wall Street Journal’s count, landed on more US year-end best-of lists than any other work of fiction, but Amazon has made it official, stamping its endorsement on Fates and Furies as the retailer’s book of the year.

The cherry on the top came from Barack Obama, who earlier this month told People magazine he liked Fates and Furies more than anything else he’d read in 2015.

True, far more people bought the UK equivalent, Paula Hawkins’s The Girl on the Train, than Fates and Furies in 2015, but they talked about it less enthusiastically.

The Girl on the Train, like a reduced-calorie substitute, numbed the hunger the reading public feels for more thrillers along the lines of Gillian Flynn’s brilliant, genre-busting Gone Girl, yet it doesn’t truly satisfy the craving.

Fates and Furies, while decidedly a work of literary fiction, doesn’t just resemble Gone Girl in a few key respects; it comes much closer than The Girl on the Train to offering the same leery take on the state of modern matrimony.

Like Gone Girl, Fates and Furies is about a marriage in which each partner has a radically disparate view, not just of their union, but of the type of narrative constituted by their lives.

It’s as if husband and wife each inhabit a different novel, in a different genre – one sunnily domestic, the other gothic. And in fact, they almost did: Groff has said that she originally wanted to publish Fates and Furies as two separate books.

The novel tells the story of Lotto and Mathilde Satterwhite. He is the darling of a prosperous Florida family – “Lotto was special. Golden”.

She, an apparent “ice princess”, is the survivor of a past about which her husband has only the fuzziest idea beyond it being “sad and dark”, and above all “blank behind her”.

The first half of the book offers Lotto’s view of their life together as he rises from charming but failed actor to celebrated playwright, thanks in no small part to Mathilde’s editorial finesse.

The second half reveals that Mathilde has, through implacable willpower, transcended circumstances that read like a hotchpotch of Greek tragedy, fable and detective novel.

Much of what Lotto takes for granted in his good fortune, it turns out, is due to Mathilde’s ruthless machination, right down to their marriage itself.

She genuinely loves him, but she initially set out to win him for mercenary reasons.

On the surface, this premise echoes the familiar observation that even two people who live together intimately can end up feeling they hardly know each other.

Given that most fiction is read by women, and that the purchase of a hardcover novel suggests a certain midlife affluence, it’s hardly surprising that so many book buyers would find this theme arresting and easy to relate to.

They are at that point in life when they realise that a wedding is less the end of a fairytale than the beginning of a mystery, and sometimes an ugly one.

This, in itself, isn’t new; a popular premise in suspense fiction has a new widow making the nasty discovery that her late husband led a secret life.

But Fates and Furies, like Gone Girl, wrenches the old wronged-woman formula out of joint. These are both tales of female puppet masters, geniuses who invisibly engineer their marriages to appear to best advantage to outsiders – and, in the case of Groff’s novel, to the husband himself.

Amy Dunne does it to take revenge, to bring the hapless Nick to heel and to consolidate her power over him.

Mathilde does it to preserve the security she has sought all her life and to protect Lotto from ever knowing “the scope of her darkness”. Each woman is far cleverer than her spouse.

Amy’s scheme is outlandishly criminal, while Mathilde’s is mostly just patronising. The good husbands in Victorian novels sheltered their wives from the world’s harshness, but now the roles are reversed.

As exaggerated as they are, Amy and Mathilde resemble every working mum who wonders if her husband has any notion of how much effort she puts into the administration of their family life.

That includes not just the serious stuff such as the kids’ healthcare and schools, but social labour on everything from birthday celebrations and the coordination of dinner parties to holiday plans. She schedules and organises; he blithely assumes it all just happens.

She shakes her head and, in her rare free hours, she curls up with a copy of Fates and Furies.

All of which makes President Obama’s admiration for the novel intriguing.

If he were eligible to run for another term, the choice might be written off as a bid to ingratiate himself with female voters of the bookish persuasion. But I think not.

The leader of the free world is, after all, famously uxorious, and the brilliance, organisational and otherwise, of Michelle Obama is a secret to no one, not even her husband.

Her favourite book of 2015, by the way, was Elizabeth Alexander’s The Light of the World, the memoir of a poet whose husband died suddenly aged 50.

If they were characters in a novel by Groff or Flynn, that would be a little worrying.

About the Author
Lauren Groff is the New York Times bestselling author of three novels, The Monsters of Templeton, Arcadia, and Fates and Furies, and two short story collections, Florida and Delicate Edible Birds. She has won the PEN/O. Henry Award and The Story Prize, been a two-time finalist for the National Book Award and a finalist for the National Book Critics Circle Award. Her work has been featured in The New Yorker, along with several Best American Short Stories anthologies, and she was named one of Granta’s 2017 Best Young American Novelists. She lives in Gainesville, Florida, with her husband and sons.

Be the first to review “Fates and Furies” Cancel reply