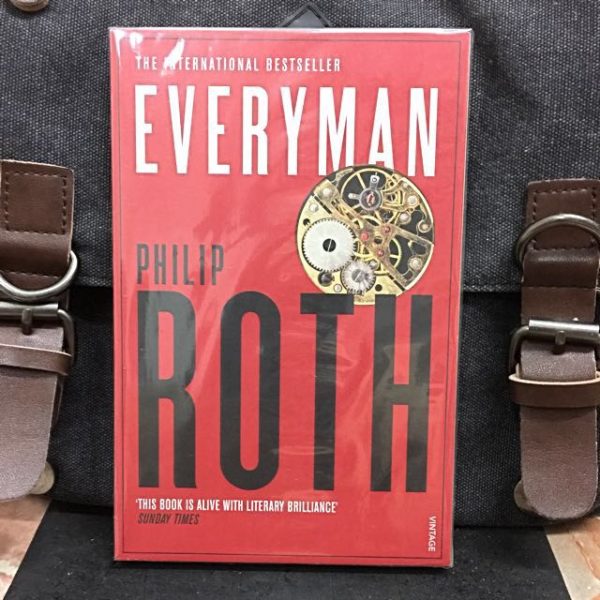 Good For You Great For Me

Winner of the PEN/Faulkner Award for Fiction

This international bestselling fiction is a bran-new book and the original new book is sold at usual price RM78.64. Now here Only at RM12.

Everyman is a candidly intimate yet universal story of loss, regret and stoicism.

A successful commercial artist with three very different ex-wives, a daughter who adores him, and two sons who despise him, the protagonist finds his confidence, sense of independence, and well-being undermined by an attack of illness in middle age.

Philip Roth’s new novel is a candidly intimate yet universal story of loss, regret, and stoicism. The bestselling author of The Plot Against America now turns his attention from “one family’s harrowing encounter with history” ( New York Times) to one man’s lifelong skirmish with mortality.
The fate of Roth’s everyman is traced from his first shocking confrontation with death on the idyllic beaches of his childhood summers, through the family trials and professional achievements of his vigorous adulthood, and into his old age, when he is rended by observing the deterioration of his contemporaries and stalked by his own physical woes.The terrain of this powerful novel is the human body. Its subject is the common experience that terrifies us all.

Philip Roth’s 27th novel is a marvel of brevity, admirable for its elegant style and composition (no surprise), but remarkable above all for its audacity and ambition. It seizes unflinchingly on one of the least agreeable subjects in the domain of the novel — the natural deterioration of the body. But beyond that, Everyman can be seen as a bid to engage conclusively with the core anxieties that the literary novel exists to confront: How, absent the shadow of God, in new and confusing brightness, shall we decide what we are, how we human animals should judge ourselves and whether we can love our species despite everything?

Everyman begins with its hero’s end, his interment. Only three of the graveside mourners speak — the dead man’s daughter, his second wife and his older brother. Ordinary puzzlement, sadness and resignation are expressed: “That was the end. No special point had been made.” What follows is a summary retrospective of the protagonist’s life. We see him as a dutiful good son who, yielding to his parents’ wishes, sets aside his artistic aspirations and, after a tour of duty in the Navy, goes to work in advertising. He prospers, ultimately becoming creative director of a major New York-based firm. His infidelities figure in the breakups of at least two of his three marriages. Along the way, he fathers two sons (they reject him with bitterness for having left their mother) and a hapless daughter, who adores him.

His health abruptly worsens when he is in his early fifties and he has to live through 20 years of episodic but severe medical interventions: many surgeries, including a quintuple bypass. His medical miseries dominate his life. He retreats to an upscale retirement community on the Jersey shore and devotes himself to painting (until he concludes that he has nothing to say in that medium) and to teaching painting to his fellow residents. He hears of colleagues declining, beginning to die off. A last operation for a carotid blockage is fatal.

Roth has taken great pains to craft an archetypical American life for his readers to contemplate. The nameless protagonist “was reasonable and kindly, an amicable, moderate, industrious man,” Roth writes. “He never thought of himself as anything more than an average human being.” He is l’homme moyen sensuel to perfection, neither good nor bad — or, rather, about as good as he is bad. He has served his country. He has no visible politics. He is unreligious (he gave up attending synagogue after his bar mitzvah). He has met his obligations — his material obligations — to his immediate families, but he has made no wider benefactions that we hear of. In his thought-life, there’s nothing distinctive. He is reasonably stoical about his medical ordeals, which are brought to life in harrowing detail by the author, but toward the end he is less stoical.

There is, in truth, more on the negative side of his ledger than on the credit side. He is self-centered to a fault. In conscious envy of his beloved elder brother’s robust health, he turns against this man who has been his sole steadfast friend. He deceives his wives. And he asserts a comfortably exculpatory determinism when he thinks over the many missteps in his life: “There was only our bodies, born to live and die on terms decided by the bodies that had lived and died before us. If he could be said to have located a philosophical niche for himself, that was it — he’d come upon it early and intuitively, and however elemental, that was the whole of it. Should he ever write an autobiography, he’d call it The Life and Death of a Male Body.” Finally, he is insular. He seems never to apprehend that he is suffering at a privileged level, that great medical coverage means everything when the bad luck begins.

Still, it is for some purpose that we are conducted through the salient parts of a life not interesting in itself. What do we say, as readers, waving farewell to this man? What assessment do we make of his life?

It’s a feat, but through this clinically secular morality tale, Roth manages to extract love and pity for his created mortal. Bravura descriptions of his skirmishes with death skillfully penetrate the readers’ normal, reflexive resistance to such images. Although our hero continues to fine-tune his rationalizations, his remorse — powerfully depicted — breaks through. And virtuoso lyrical passages capture the protagonist’s yearning for the strength and joy of his youth: “Nothing could extinguish the vitality of that boy whose slender little torpedo of an unscathed body once rode the big Atlantic waves from a hundred yards out in the wild ocean all the way in to shore. Oh, the abandon of it, and the smell of the salt water and the scorching sun! Daylight, he thought, penetrating everywhere, day after summer day of that daylight blazing off a living sea, an optical treasure so vast and valuable that he could have been peering through the jeweler’s loupe engraved with his father’s initials at the perfect, priceless planet itself — at his home, the billion-, the trillion-, the quadrillion-carat planet Earth!”

Through consummate art, Roth elevates the links that bind his protagonist to us, the readers who judge his life. From a distance, Everyman looks like a shaggy dog story — a long, quotidian story whose meaning resides in its final pointlessness. Up close, though, it is a parable that captures, as few works of fiction have, the pathos of Being, as it’s manifested even in the favored precincts of affluent America.

About the Author
In 1997 Philip Roth won the Pulitzer Prize for American Pastoral. In 1998 he received the National Medal of Arts at the White House and in 2002 the highest award of the American Academy of Arts and Letters, the Gold Medal in Fiction. He has twice won the National Book Award and the National Book Critics Circle Award. He has won the PEN/Faulkner Award three times. In 2005 The Plot Against America received the Society of American Historians’ Prize for “the outstanding historical novel on an American theme for 2003-2004.” Recently Roth received PEN’s two most prestigious awards: in 2006 the PEN/Nabokov Award and in 2007 the PEN/Bellow Award for achievement in American fiction. Roth is the only living American novelist to have his work published in a comprehensive, definitive edition by the Library of America. In 2011 he received the National Humanities Medal at the White House, and was later named the fourth recipient of the Man Booker International Prize.

Be the first to review “Everyman” Cancel reply