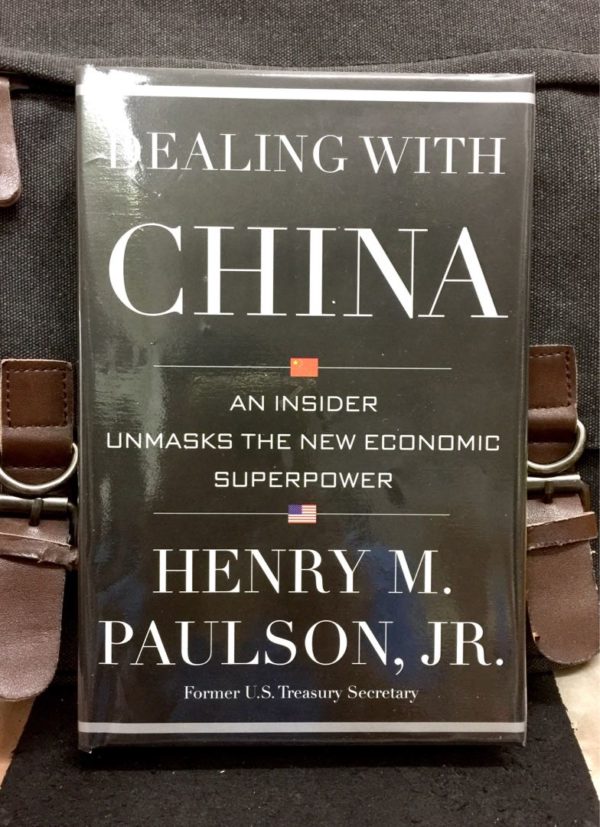 Dealing with China : An Insider Unmasks the New Economic Superpower

Henry M. Paulson, Jr., former secretary of the US Treasury and CEO of Goldman Sachs, delivers a behind-the-scenes account of China’s rise as an economic superpower.

When Hu Jintao, China’s then vice president, came to visit the New York Stock Exchange and Ground Zero in 2002, he asked Hank Paulson to be his guide.

It was a testament to the pivotal role that Goldman Sachs played in helping China experiment with private enterprise.

Hank Paulson has dealt with China unlike any other foreigner. As head of Goldman Sachs, Paulson had a pivotal role in opening up China to private enterprise.

Then, as Treasury secretary, he created the Strategic Economic Dialogue with what is now the world’s second-largest economy.

He negotiated with China on needed economic reforms, while safeguarding the teetering U.S. financial system. Over his career, Paulson has worked with scores of top Chinese leaders, including Xi Jinping, China’s most powerful man in decades.

In DEALING WITH CHINA, Paulson draws on his unprecedented access to modern China’s political and business elite, including its three most recent heads of state, to answer several key questions:

● How did China become an economic superpower so quickly?

● How does business really get done there?

● What are the best ways for Western business and political leaders to work with, compete with, and benefit from China?

● How can Western investors profit in China?

● How can the U.S. negotiate with and influence China given its authoritarian rule, its massive environmental concerns, and its huge population’s unrelenting demands for economic growth and security?

Written in the same anecdote-rich, page-turning style as Paulson’s bestselling memoir, On the Brink, DEALING WITH CHINA is certain to become the classic and definitive examination of how to engage China’s leaders as they build their economic superpower.

Dealing With China is Henry Paulson’s primer for deal-making with China. The economic woes in China have a storied history and although the majority of the book deals with banking reform, a good portion is devoted to a topic many readers are most likely unaware of: Henry Paulson’s conservationism.

As chairman of the board of directors of the Nature Conservancy, Paulson’s passion for sustainability shines during his writing of climate change and the challenges presented with conserving China’s coastal wetlands, maintaining energy security and lowering carbon emissions.

As with economic reform, the message resonates clearly: it will be easier to tackle energy reform if both China and America work in complement to one another rather than in conflict with each other.

The way forward, suggests Paulson, is to “find China a better seat at the table.” America should want China to have a stronger leadership position in international groups like the World Trade Organization, the G20 and the Inter-American Development Bank.

Having China work with other developed nations and banking institutions will encourage Chinese corporations to observe stringent social as well as environmental standards.

This could only pay dividends for America’s interests. In making the case for China needing to find a better seat, Dealing With China is an opportunistic and creative dialogue on the possibilities China and America could foster for themselves by maintaining a resilient partnership.

After decades of negotiations with China, Henry Paulson has written a tour de force on how to effectively deal with China.

It is a detailed account on the recent political and business history of China. It spans from 1978-2015. Very detailed.

His personal accounts of creating Petro China, one of the greatest companies in the world by revenue and influence is fascinating.

Along with dealing with interesting and some unsavory characters within the government of China, Mr. Paulson doesn’t sugarcoat any accounts nor leave out any important examples.

If you are a business major or interested in business management and world affairs I definitely recommend “Dealing With China.”

In a nutshell, A former U.S. Treasury secretary and CEO of Goldman Sachs takes the reader behind closed doors to witness the creation and evolution of China’s state-controlled capitalism.

The former US Treasury secretary’s access to China’s elite has resulted in a book that will go down well in Beijing, if not with other regional powers

This book is a must-read for anyone who deals with China and possesses an aircraft carrier or two.

Former US Treasury secretary Henry (Hank) Paulson has for more than a decade enjoyed a level of meaningful access to the Chinese elite that may be unrivalled among westerners, with the single exception of Henry Kissinger.

For that reason, Dealing with China is an important book. But the dealing that Paulson describes is of an order that is hardly likely to trouble mere mortals.

His world is one of private jets (on one occasion escorted by F-16s on each wing), billion-dollar agreements with Chinese corporate titans and exclusive meetings with Chinese leaders as a top official in George W Bush’s White House.

Thus the book’s main strength is also a shortcoming; his extraordinary experience of China yields lessons that may only be useful if you happen to govern a great power.

For general readers, the payback from 400-odd pages is more likely to come in numerous asides revealing a human authenticity that Chinese leaders usually strive to expunge from the images they present to the world.

Some of his stories are truly thought-provoking. One episode started at the dead of night on September 11 2001, when Paulson, then chief executive of Goldman Sachs, was in a private jet over the Pacific flying towards China.

The pilot emerged from the cockpit to inform him of an urgent call from headquarters. Planes had flown into the World Trade Center, a colleague told him as he listened to the shouts of Goldman staff in the background.

Paulson’s first reaction was to order the plane to fly back to New York, but he was thwarted by the closure of US airspace to all but military aircraft, leaving him no choice but to go on to Hong Kong.

After a sleepless night, he decided to go straight into a day of meetings. “I wanted to lead by example,” he writes. “I didn’t want anyone to think we could be stopped by these attacks.”

But the first meeting he had that day was with Gao Yan, chief executive of China’s State Power Corporation, who appeared supremely unsympathetic. “When I mentioned the attack, trembling with shock and sorrow, he didn’t say a word. I mean not one word,” Paulson writes.

Elsewhere in the book, telling biographical details filter through. We learn, for instance, that during the Cultural Revolution, Zhou Xiaochuan, governor of China’s central bank, was sent down for four years to a farm in the northern province of Heilongjiang, where the brutal winters last from October to May.

However, he fortified his spirit with a five-foot-tall stack of classical music records that he’d managed to collect. “During the Cultural Revolution, they tried to stop people from listening to classical music but in the countryside, no one cared!” Paulson quotes Zhou as telling him.

At other points, the book glimmers with both the craft and unintended humour that Chinese diplomacy throws up.

On one occasion the Chinese side, led by Wu Yi, a senior official who was responsible for commerce, told Paulson she wanted to arrange a treat for him.

The nature of it was kept as a surprise until Paulson was led on to a balcony in central Beijing after dark one evening and shown a vista over the Forbidden City, the imperial palace of dynastic emperors.

Only this was no ordinary sight: all the lights inside and around the complex had been turned on. “The vast old palace complex, witness to centuries of empire, war, revolution and protest, was ablaze in a welcome just for us,” Paulson writes.

Another Chinese gift, however, was more tricky to handle. The US delegation were watching a fireworks display on a cold evening and Paulson’s teeth were already chattering when the Chinese gave their guests Red Army coats with fur collars and star-stamped brass buttons.

“I craved the warmth but didn’t dare put mine on. What a photo that would have made: the US Treasury secretary dressed like a Red Army soldier! Talk about the Manchurian candidate.”

Such vignettes — and there are many of them — provide a welcome leavening to the heavy loam of dealmaking details, statistics, names, titles and acronyms that Paulson deploys to reinforce a central argument. Indeed, from the preface onward, the author is straightforward about the book’s aim.

“We find ourselves at cross purposes with an ever more competitive China as it flexes its newfound muscles in a world of markets and in bitter territorial disputes with its neighbours, while it seeks to challenge the US-led order in Asia and in aspects of the system of global governance that has prevailed since World War II,” he writes.

His prescription for the US to meet these multi-faceted challenges is simple: clear-eyed, constructive co-operation. China may be a formidable competitor, he says, but the US should not shrink from competition.

The idea that the “China model” represents a superior form of capitalism that is triumphing over the pre-existing US-led system is a misconception that haunts the way some people view the relationship.

Americans should root for China to succeed, he argues, because it is in the US self-interest to do so.

Almost every global challenge of the current era — from environmental and economic issues to food security and nuclear proliferation — will be almost impossible to solve unless the world’s two most important powers can work together.

But although he is clear about the direction the US should take, he is often critical of the way Washington conducts the relationship.

He forwards eight principles to guide US policy makers toward fruitful co-operation with China. Some of these — such as supporting moves within China for greater transparency and adherence to international standards — are reiterations of longstanding US policy.

Others, though, seem more distinctive. Urging the US to “Speak with One Voice” with official Chinese interlocutors, he decries the confusing array of messages that democracies often communicate to Beijing.

He also suggests that Washington should try to “Find China a Better Seat at the Table”, meaning it should pro­actively support Chinese leadership roles in international groups such as the World Trade Organisation.

In summary, Paulson’s prescriptions all tend toward forging better relations with China by supporting what China wants.

This dealmakers’ formula may win friends in Beijing but will be less popular among US allies in Asia — such as Japan — that have deep misgivings over their giant neighbour’s territorial claims and strategic ambitions.

And for those of us who do not control the levers of state, the lessons Paulson takes away from an extraordinary and privileged association with China are likely to remain somewhat academic.

About the Author
As the CEO of Goldman Sachs from 1999-2006 and then as the Treasury Secretary of the United States from 2006-2009 Hank Paulson has sat across the bargaining table from countless Chinese politicians as both a banker and a statesman. Since leaving Washington, the former Treasury Secretary has worked on bridging the gap between East and West through The Paulson Institute, which he describes not as a think tank but as a “think and do” tank.

Be the first to review “Dealing with China : An Insider Unmasks the New Economic Superpower” Cancel reply