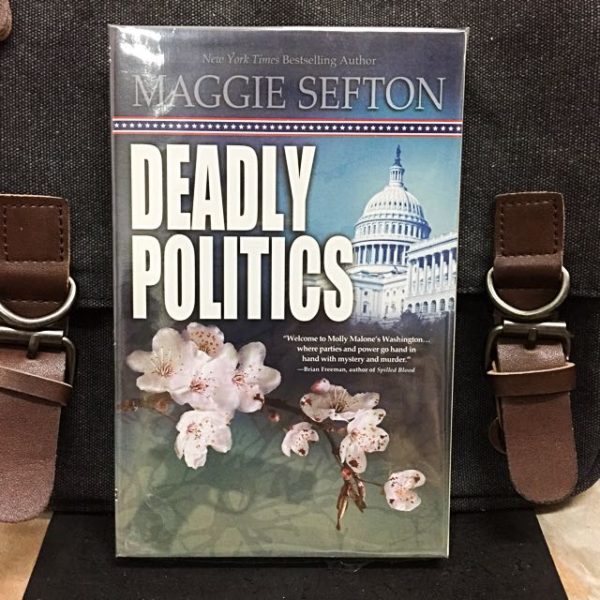 Modern Dog Parenting : Raising Your Dog Or Puppy To Be A Loving Member Of Your Company

The Men Who Would Be King : An Almost Epic Tale of Moguls, Movies, and a Company Called DreamWorks
Maggie Sefton
Brand-new, Paperback

This New York Times bestseller in paperback edition is a bran-new book and nicely wrapped with protective book-wrapper. The original new book is sold at usual price RM66.71. Now here Only at RM14.

Molly Malone, the wife of a former congressman, returns to Washington D.C. to start over. She never thought she would return to the town full of backstabbing politicians and personal heartbreak but this is where her family is and she needs them now more than ever.

Molly Malone was driven from Washington, D.C., by political back-stabbing, scandals, and personal heartbreak. But now she’s starting a new life in the one place she swore she’d never come back to.

When Molly’s only Washington job prospect falls through, her politico niece, Karen, sets her up with a position in the office of a freshman senator. As the former wife of a congressman, Molly is alarmed to hear that Karen is having an affair with her boss, congressional chief of staff Jed Molinoff. Just days later, Molly finds Karen shot to death. Discovering that Molinoff has ransacked Karen’s apartment, Molly investigates further . . . and finds herself in the crosshairs of a shadowy political group that’s killing anyone who gets in its way.

She thought she had a job all lined up but it fell through at the last minute. Her niece, Karen, works “on the hill”, sets her up to interview with freshman senator tracking his budgets and finance and she takes the job. Karen and Maggie have always been close and now in Washington together they are thrilled to spend more time with each other. Molly is surprised to find out who Karen is having an affair with and when she is killed she a few days later Molly is afraid her death was not a random act of violence.

Molly can’t help herself from doing a little investigating of her own but her inquires are drawing the attention of the wrong people. People that kill people that get in their way. This is not how Molly expected her new life in Washington to begin or end.

Warning this is not a cozy mystery. Maggie Sefton is showing the edgier side of her imagination in this new series and it is FANTASTIC!!! I honestly could not put this book down. Life stopped as I became totally immersed in this story.

Molly knows Washington D.C. can be a dangerous place but never thought it would come right to her workplace. She has been through so much but she is a strong woman and has been in and around politics her entire life. She knows the game and its players. She is smart, savvy, clever and determined. She is going to find out who killed her niece or die trying. Sefton has created a tough and gutsy protagonist that readers will quickly become invested in and want to see her succeed.

With Washington politics as a backdrop the possibilities for this series are endless. I am anxious to see all the characters evolve in future stories. From Molly’s mom and her friends Deb and Nan, the senator’s staff, to Molly love life, and all the politics this series has a very bright future! I definitely want more Molly Malone and more Deadly Politics.

Many are giving this 5 out of 5 stars and look forward to reading the next one.

Be the first to review “Deadly Politics” Cancel reply