Shop - Crisis Economics : A Crash Course in the Future of Finance 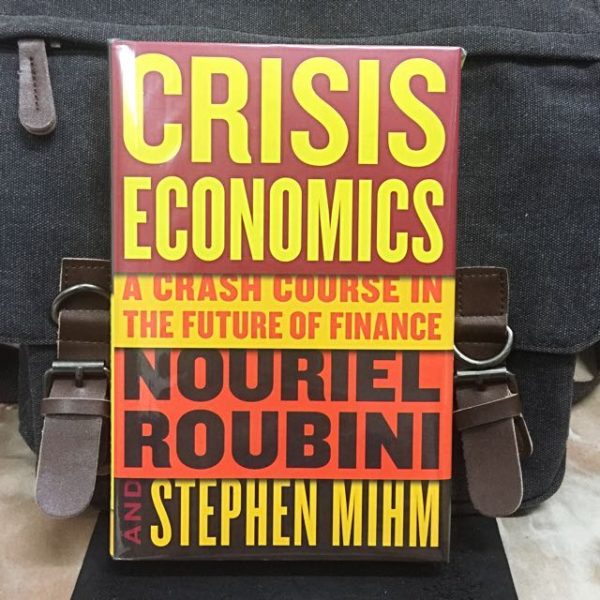 Crisis Economics : A Crash Course in the Future of Finance

THE GOSPEL OF HAPPINESS : Rediscover Your Faith through Spiritual Practice and Positive Psychology

How Not To Forecast A Crisis

This New York Times and Wall Street Journal bestseller in hardcover edition is a bran-new book and still wrapped with new-book plastic wrapper. The original new book is sold at usual price RM112.22 (Hardcover). Now here Only at RM20.

This myth shattering book reveals the methods Nouriel Roubini used to foretell the current crisis before other economists saw it coming and shows how those methods can help us make sense of the present and prepare for the future.

Renowned economist Nouriel Roubini electrified his profession and the larger financial community by predicting the current crisis well in advance of anyone else.

Unlike most in his profession who treat economic disasters as freakish once-in–a-lifetime events without clear cause, Roubini, after decades of careful research around the world, realized that they were both probable and predictable.

Armed with an unconventional blend of historical analysis and global economics, Roubini has forced politicians, policy makers, investors, and market watchers to face a long-neglected truth: financial systems are inherently fragile and prone to collapse.

Drawing on the parallels from many countries and centuries, Nouriel Roubini and Stephen Mihm, a professor of economic history and a “New York Times Magazine” writer, show that financial cataclysms are as old and as ubiquitous as capitalism itself.

The last two decades alone have witnessed comparable crises in countries as diverse as Mexico, Thailand, Brazil, Pakistan, and Argentina. All of these crises-not to mention the more sweeping cataclysms such as the Great Depression-have much in common with the current downturn.

Bringing lessons of earlier episodes to bear on our present predicament, Roubini and Mihm show how we can recognize and grapple with the inherent instability of the global financial system, understand its pressure points, learn from previous episodes of “irrational exuberance,” pinpoint the course of global contagion, and plan for our immediate future.

Perhaps most important, the authors-considering theories, statistics, and mathematical models with the skepticism that recent history warrants–explain how the world’s economy can get out of the mess we’re in, and stay out. In Roubini’s shadow, economists and investors are increasingly realizing that they can no longer afford to consider crises the black swans of financial history.

A vital and timeless book, “Crisis Economics” proves calamities to be not only predictable but also preventable and, with the right medicine, curable.

Few economists can make as strong a claim to having foretold the calamities of 2008-09 as Nouriel Roubini.

In 2006, as U.S. housing prices marched steadily toward their peak, the New York University professor told an audience at the International Monetary Fund that disaster loomed. Home prices would soon collapse, leading, domino-like, to a “systemic problem for the financial system” that would ripple around the world.

Others saw the housing crash coming and some even made billion-dollar bets on the homeowners they calculated would never be able to pay outsized mortgages on homes they had tapped like piggy banks during a decade of low rates.

But Roubini’s warnings, which he himself describes in his book as “prescient,” were among the darkest – earning him the nickname “Dr. DOOM Gloom” – and admittedly, also among the most prescient. For a brief moment in the dark winter of 2008-09, Dr. DOOM Gloom earned an unlikely celebrity as one of the economic prognosticators whose every word about the likelihood of a V-shaped vs. a U-shaped recovery made headlines, or at least, a noisy segment on CNBC.

That 15 minutes of crisis fame now places an added burden on Roubini as he analyzes the crisis he foretold and offers a “road map” for reforms aimed at ensuring such financial catastrophes are avoided in the future. It seems only fair to expect that an economist known for his bang-on prediction of the train crash should be able to explain how he saw the train coming – and be able to offer a unique and surprising set of prescriptions for reform.

Crisis Economics, penned with journalist and history professor Steven Mihm, offers a cogent and readable explanation of the events and forces that produced the greatest financial catastrophe since the Great Depression. And the authors’ prescriptions for future reform of the financial system, and its regulators, are also well-argued and explained.

Crisis economics, the authors state, “is the study of how and why markets fail.” They’re tackling this because so much of mainstream economic thinking focuses on how markets behave when they’re working the way they’re supposed to – and this approach presupposes that markets are essentially efficient, and that the invisible hand works well.

Instead, the authors argue, crises dating back to the Dutch tulip craze in the 17th century show that supply and demand aren’t always rational or efficient, and in fact can cause markets to run amok. Much of the book is devoted to a clear-eyed and readable look at how that happened in the recent crisis, from the easy money policies of the Federal Reserve System and the Wild West of Wall Street’s securitization frenzy, to the failure along the way of regulators to tackle such exotic derivative beasts as credit default swaps.

The methodical look at options for regulatory reform offers an intelligent rough guide to solving the financial world’s regulatory problems. In addition to explaining the kinds of complex changes in banks’ capital structures that will be discussed at the G20 summit in Toronto later this month, the authors circle back to some of the root causes of the debacle: The big banks were too interconnected, in addition to being too big, so simply reducing their size won’t solve the problem. Central banks, the U.S. Federal Reserve in particular, take the view that it is too risky to try to deflate asset bubbles – even when they choose to recognize them.

The process of securitization – parcelling off loans to many different investors – needs to change so that someone bears responsibility for monitoring lending risk. That means greater scrutiny of the way in which the loans are sold off to institutions, but also greater oversight of how they’re awarded to consumers, so that they aren’t getting in over their heads.

The authors use the metaphor of a sausage: “If you put rat meat and trichinosis-laced pig parts into your sausage, then combine it with lots of other kinds of sausage … you still have some pretty sickening sausage.”

The global economy is still struggling to digest the subprime sausage on which it gorged for so many years; the European debt crisis and market volatility around the world are clear reminders that it’s not over.

But what has really changed?

Financial regulation reform is making its way into law in the US, and there has been talk of a global bank tax ahead of the G20 . but few people believe that these measures come anywhere near the kind of wholesale overhaul of the sausage factory that Roubini and Mihm are prescribing.

This was supposed to the crisis that would change the face of capitalism, because, as the authors argue, it showed so clearly that markets, left to their own devices, can be anything but efficient. They can be over-inflated and euphoric and frankly, stuffed full of rat meat. But maybe this outcome should be the least surprising: We know that markets fail and catastrophe follows – it has happened again and again. What might be worth exploring is why.

Crises follow familiar trajectories and yield predictable results, and the authors set us straight on misunderstood concepts, including moral hazard, leverage, and deflation.

We learn about older crises from Holland’s tulip bubble in the 1630s through today and get to know economic thinkers in earlier generations. On the recent financial crisis, the authors describe its structural origin and its comparison to previous crises, along with its international dimensions, and they explore the aftershocks of all crises.

Finally, we learn about the role of policy makers and are provided with a blueprint for a new financial architecture and radical reforms for the future. While an academic book, it is written in an understandable manner and offers important information and perspective for investors as well as executives and students.

About the Author
Nouriel Roubini is a professor of economics at New York University’s Stern School of Business and the founder and chairman of Roubini Global Economics. He has served in the White House and the U.S. Treasury. He lives in New York City.

Stephen Mihm writes on economics and history for The New York Times Magazine, The Boston Globe, and other publications and is an associate professor of history at the University of Georgia. He lives in Decatur, Georgia.

Be the first to review “Crisis Economics : A Crash Course in the Future of Finance” Cancel reply