Shop - Connecting the Dots: Leadership Lessons in a Start-up World 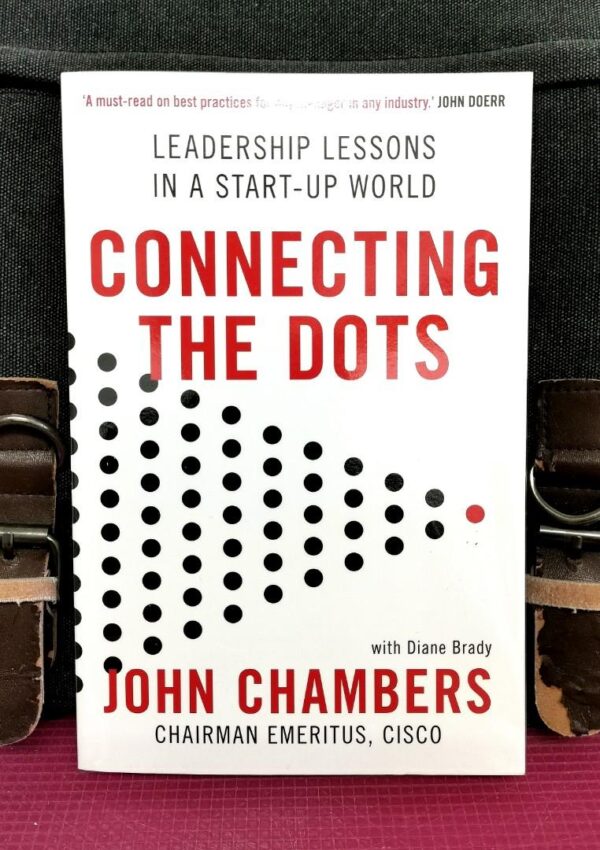 Connecting the Dots: Leadership Lessons in a Start-up World

#Preorder THINK LIKE A MONK : Train Your Mind for Peace And Purpose Every Day

CAREFUL! : The Surprising Science Behind Everyday Calamities – And How You Can Avoid Them
John Chambers
Brand-new, Paperback

☞ How are startups driving the wave of disruption, and what can companies and countries do to tap digital innovation at scale?

☞ What are the foundations of customer success in a connected world?

☞ How should one keep reinventing oneself in a world of change?

Answers to these questions are well captured in the new book, Connecting the Dots: Leadership Lessons in a Startup World, by John Chambers, Chairman Emeritus, Cisco.

“Great leaders are distinguished by the ability to move their society or company from where it is to where it has never been. They act on the basis of a set of core principles, both intangible and inspirational. John Chambers, an accomplished executive in his own right, distills those principles in Connecting the Dots with elegance and common sense.”
— Henry Kissinger, Former U.S. Secretary of State

Legendary Silicon Valley visionary and one of the world’s greatest business leaders, John Chambers shares the playbook and philosophy that transformed Cisco into a global tech titan and now inspire a new generation of leaders.

In this insightful book, John Chambers shares the lessons that transformed a dyslexic kid from West Virginia into one of the world’s best business leaders and turned a simple router company into a global tech titan.

When Chambers joined Cisco in 1991, it was a company with 400 employees, a single product, and about $70 million in revenue.

When he stepped down as CEO in 2015, he left a $47 billion tech giant that was the backbone of the internet and a leader in areas from cybersecurity to data center convergence.

Along the way, he had acquired 180 companies and turned more than 10,000 employees into millionaires.

Widely recognized as an innovator, an industry leader, and one of the world’s best CEOs, Chambers has outlasted and outmaneuvered practically every rival that ever tried to take Cisco on–Nortel, Lucent, Alcatel, IBM, Dell, and Hewlett-Packard, to name a few.

Now Chambers is sharing his unique strategies for winning in a digital world.

From his early lessons and struggles with dyslexia in West Virginia to his bold bets and battles with some of the biggest names in tech, Chambers gives readers a playbook on how to act before the market shifts, tap customers for strategy, partner for growth, build teams, and disrupt themselves.

① Disrupt or be disrupted – This is the key for any 21st century leader or organization. Be nimble and flexible in the midst of chaos and uncertainty. Having the ability to anticipate change is one of the keys.

② Keep learning – With the amount of change that is literally mind boggling leaders have an averse to learning. Keep reading, listening to podcasts, connect with experts in your field, read their blogs, books and document what you learn. Think weeks for Bill Gates was a famous example of learning at the highest level.

③ Take risks and move fast – It is always better to get first into the market than last. Release products early and don’t ever wait for perfection. Iteration is more important than perfection which doesn’t exist anyway.

⑤ Dream big dreams and be bold again – This is the crux of the book. All leaders who have won big were big dreamers. They had a great vision which propelled them to anticipate and get around all obstacles. Some people call this blue sky thinkers where they think of the clear blue sky where anything is possible.

⑦ The bigger the crisis the calmer you get – The only certainty in a leader’s life is crisis. What we need now more than anything else is leaders who are calm in the midst of uncertain times.

⑧ Vision and Strategy – The number one responsibility of a CEO is to set the vision and then the strategy for the vision.

As CEO of JC2 Ventures, he’s now investing in a new generation of game-changing startups by helping founders become great leaders and scale their companies.

Connecting the Dots is destined to become a business classic, providing hard-won insights and critical tools to thrive during the accelerating disruption of the digital age.

With numerous start-ups moving from zero to a billion to bankruptcy in a matter of years, it’s clear that sustaining a business in the digital age is no walk in the park.

Over 20 years, John Chambers transformed a company with 400 employees and one toaster-sized product (a router) into a tech giant that’s the backbone of the Internet.

Along the way, he’s outlasted and outmaneuvered practically every rival that ever tried to take Cisco on-Nortel, Lucent, Alcatel, IBM, Dell, and Hewlett-Packard, to name a few-and turned more than 10,000 employees into millionaires, more than any company in history.

When Chambers stepped down as executive chairman in December of 2017, he left a company that didn’t just shape the first Internet era but is leading the next wave of innovation in areas from cyber-security to self-driving cars.

Now, in collaboration with award-winning journalist Diane Brady, Chambers shares the stories and strategies that helped his company win again and again through multiple market shifts.

Posing a unique mode of thought proven to attain success, the message of this book is clear; it is not the biggest or the richest players who win, but the ones who are able to stay ahead of the trend by connecting the dots.

Both enlightening and practical, this is essential reading to inspire a new generation of leaders.

In the nutshell, Connecting the Dots distills Chambers’ philosophy for reinventing himself and his company into a book that will inspire leaders of any size enterprise, in any industry, for years to come.

Using stories from his childhood in West Virginia and insights from his career, Chambers will share his playbook for how to build a business that dominates.

Today Chambers, who has been listed among the “World’s Best CEOs” by Barron’s and named one of Time magazine’s “100 Most Influential People,” has adapted his lessons to help transform government, becoming a trusted advisor to global leaders like French President Emmanuel Macron and Indian Prime Minister Narendra Modi to create new models for growth.

He’s also coaching and investing in the leaders of a number of game-changing startups through JC2 Ventures, a purpose-driven venture firm committed to developing startup companies, startup nations, and a startup world.

In the digital era, companies can go from zero, to a billion, to bankruptcy in a matter of years.

THE WINNERS WON’T BE THE BIGGEST OR RICHEST PLAYERS, BUT THE ONES WHO CAN CONNECT THE DOTS—IN ANY SIZE ENTERPRISE AND IN ANY INDUSTRY.

About the Author
John Chambers, chairman emeritus at Cisco, served as the company’s CEO for more than two decades. He has worked closely with government leaders from around the world, serving on committees for two U.S. presidents and earning the first-ever Clinton Global Citizen Award as well as the Woodrow Wilson Award for Corporate Citizenship. He is also the founder and CEO of JC2 Ventures, where he helps disruptive startups to scale and lead market transitions.

Diane Brady is an award-winning journalist and consultant who has covered the global business landscape for Bloomberg Businessweek, The Wall Street Journal, and other media outlets. Her previous book, Fraternity, was named one of Amazon’s best books of 2012.

Be the first to review “Connecting the Dots: Leadership Lessons in a Start-up World” Cancel reply