Shop - Christ The Lord : Out Of Egypt 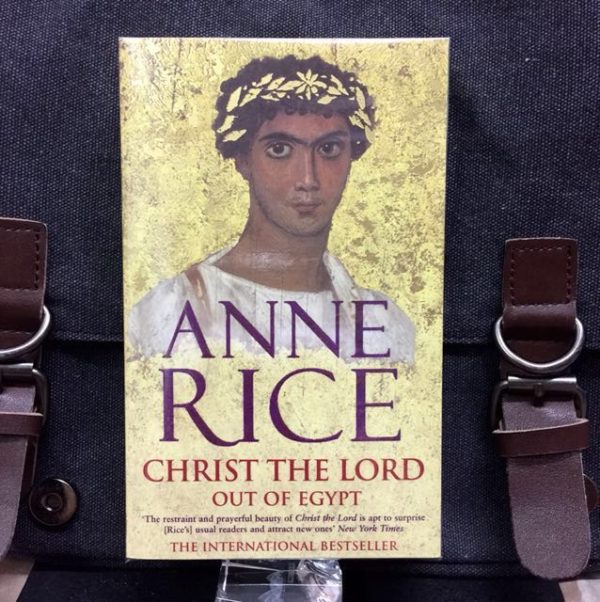 Christ The Lord : Out Of Egypt

Free : The Future of a Radical Price

This international bestselling fiction in paperback edition is a bran-new book and nicely wrapped with protective book-wrapper. The original new book is sold at usual price RM52.86. Now here Only at RM12.

Christ the Lord: Out of Egypt (2005) is a book by Anne Rice that depicts the life of Jesus Christ at the age of 7 to 8. Rice wrote the novel after returning to the Catholic Church in 1998.

In Israel, in the turbulent first century, a baby is born to a humble Jewish family – but to a great destiny. His is an uneasy childhood, as he begins to come to terms with his extraordinary powers, and the whispered mysteries surrounding his birth.

The tyrannical rule of King Herod has driven the family from the Holy Land to the relative safety of cosmopolitan Alexandria. But on Herod’s death, they decide to return home to Israel, to Galilee, a troubled land under Roman occupation, at a time of chaos and turmoil, insurrection and confusion…

The life of Christ comes to us largely from the Gospels, the historicity of which has been the subject of disagreement between scholars, theologians and historians from then to now.

The childhood of Jesus is virtually invisible in the historical record and mentioned only once, after the nativity, in the Gospels. The rest is speculation, folk stories collected into apocryphal books and, well, fiction. Rice uses a good deal of material from the apocryphal Infancy Gospel of Thomas.

Hardly the historical accuracy which she insists is so important, but what does it matter? Why not make up the life of Jesus aged seven? No reason at all. An exploration of the consciousness of a child who is believed by his parents to be divine is a great subject for a novel. But you do need something more than piety and access to history books to bring it off.

Anne Rice’s pre-teen Son of God is a pedestrian but sensitive lad, a bit of a goody-goody who occasionally surprises himself by getting what he wishes for (the death of a child who annoys him, snow).

He conveys the workings of his inner being by naming emotions: when he feels fear, he says “I was afraid”, when he’s happy about something, he explains, “I was happy.” The literary effect is similar to painting by numbers. The book is stretched beyond its physical length (like the plank Jesus elongates for his stepfather, though that’s one apocryphal miracle not mentioned in this novel) by single-sentence paragraphs:

“Her eyes settled on mine.

She stared intently at me.

She reached out and took me by the shoulders.

All that’s missing are muddy-coloured illustrations of darkish people with tea towels on their heads, and we’d be right back in the subtle and complex world of the Ladybird Books. Rice’s prose probably wishes itself to be stark simplicity, but it comes across as inept.

Her first-person Christ speaks in the past tense about being seven, in a clunky mix of faux-childish innocence and faux post-facto irony: “Now Big Joseph was my father, because he was married to my mother, but I’d never called him Father. I’d been taught to call him Joseph. I didn’t know why.” Occasionally the book slips into hard-boiled American. (“The crowds don’t want patience right now. They want action. They want vengeance. And they just might get it.”) Is the narrative voice coming from an adolescent Jesus, from just after he finishes the sermon on the mount, from before the crucifixion or from on high? You’d hope that the Son of God, or even a popular novelist, could manage language better than this.

It doesn’t really matter about accuracy – a novelist should be free to play with the facts to get nearer to the truth. What’s wrong is the lack of skill in imagining and then depicting a time, a place and a person.

In Christ the Lord, Anne Rice has conscientiously taken all the drama, elegance and urgency of the Gospels and the Apocrypha, and flattened them into a tedious and mediocre potboiler. Which is a pity, because it’s still a hell of a good idea for a novel.

About the Author
Anne Rice is the author of more than thirty internationally bestselling books including ‘The Mayfair Witches’ sequence, ‘The Songs of the Seraphim’ and ‘The Wolf Gift Chronicles’. The phenomenon that became ‘The Vampire Chronicles’ began with Interview with a Vampire in 1976, later made into a film starring Tom Cruise and Brad Pitt, and culminated with Blood Canticle in 2003. Prince Lestat, published in 2014, and Prince Lestat and the Realms of Atlantis, published in 2016, were the first new Vampire Chronicle novels for over a decade. Anne Rice lives in California.

Be the first to review “Christ The Lord : Out Of Egypt” Cancel reply