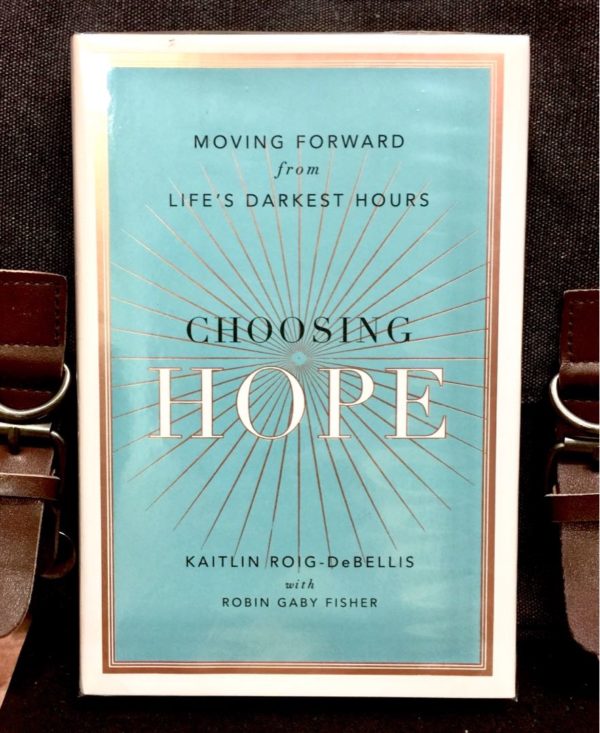 Real Story on The Power of “Freedom To Choose”

This inspiring New York Times bestseller in hardcover edition is a bran-new book and still wrapped with new-book plastic wrapper. The original new book is sold at usual price RM118.85 (Hardcover). Now here Only at RM23.

“Although now I have witnessed the worst of mankind, instead of feeling bitter or regretful I have chosen to embrace gratitude. I believe in the power of kindness, the influence of educators and mentors, faith and God, and most of all I believe in humanity. Bad things happen to all of us, things that test us and impact us and change us, but it is not those moments that define us. It is how we choose to react to them that does.”

This is an amazing read by a woman teacher who survived the Sandy Hook shooting in December 2012.

Kaitlin Roig-Debellis is the first-grade teacher at Sandy Hook Elementary School who saved her entire class of fifteen six- and-seven-year-olds from the tragic events that took place on December 14, 2012, by piling them into a single-occupancy bathroom within her classroom, mere feet from the brutal and indiscriminate massacre taking place outside the door. Since then, despite the unimaginably painful experiences she endured, she has chosen to share her experience with others, in the hope that they too can find light in dark moments.

When a gunman stormed Sandy Hook Elementary School in Newton, Conn., killing 26 people—including 20 children—in 2012, teacher Roig-Debellis swiftly herded her 15 first-graders into a cramped bathroom, where they sat in quiet terror for 45 minutes until rescue arrived. In this memoir, Roig-Debellis, writing with Fisher, recounts that tragic day.

The author shares details of her past as an adopted child raised in a loving middle-class family in a Connecticut town. Early on, she knew her career goal; inspired by her fifth-grade teacher, she vowed to become a “dedicated educator, a counselor, a mentor, and a life guide.”

Little did she know how literally that wish would manifest (readers are forewarned that they may wish to skip a portion of the “My Darkest Hour” section, though the retelling is handled with great care).

Following the tragedy, Roig-Debellis advocates for her students, insisting upon an extended delay in return to school. Eventually classes resume in a different location, but the author’s pleas for extra safety measures for her traumatized students are ultimately denied. Not to be deterred from her mission to help others, Roig-Debellis initiates Classes 4 Classes, an online nonprofit that enables kids to help other kids. The memoir not only dramatically conveys how swiftly an “ordinary” life can change, but also probes the depth of the struggle to rise from despair to hope.

Choosing Hope is a lot of things. A written witness to a tragedy that will never be forgotten. A gripping firsthand testament to the power of good over the power of destruction. An inspirational memoir by a brave young woman whose story is one of courage, heroism, faith, and resilience. And a celebration of all the people who make the choice to pass along their hope and positivity to young ones—parents, mentors, and especially teachers. There is no moving on, but there is always moving forward. And how we move forward is a choice.

Roig-DeBellis is the teacher who hid her students in the restroom attached to her classroom. She showed exceptional bravery and applaud her for that.

Roig-DeBellis’ truly demonstrates that you can survive a horrific event and still make positive change in the world. As you can see from the first paragraph, Roig-DeBellis opened a nonprofit to help teachers who need help purchasing items for their classrooms. This started as a result of the Sandy Hook shooting because her classroom received more donations than they needed. Roig-DeBellis conversed with her students and came up with the idea. It’s really great that something positive happened as a result of the Sandy Hook shooting.

There are a few things that disturb me about this book. First, once students returned to class they were sent to a different elementary school so they wouldn’t be returning to the scene of the shooting. Roig-DeBellis’ new classroom did not have an attached restroom and she was scared about where to hide in case there was another shooting. She addressed the issue with her Principal and Superintendent on numerous occasions. They disregarded her, stating that the elementary school was safer now with police protection.

Roig-DeBellis also tells a little bit about her personal life in the beginning, as well as the entire story of that fateful day in December 2012. This is a powerful story and I highly recommend everyone to read it.

“Teachers rescue children every day by teaching them the skills they need to succeed in life. But no teacher expects to have to rescue her students from a deadly attack. Kaitlin Roig’s quick thinking and swift action saved her students’ lives. In her book, Choosing Hope, Kaitlin honors the memory of the children and educators whose lives were lost on that sad day.”
–Mrs. Laura Bush, Former First Lady of the United States

About the Author
Kaitlin Roig-DeBellis is the founder of the nonprofit Classes 4 Classes, Inc and an inspirational speaker for teachers and organizations across the country. Previously, she was a first-grade teacher at Sandy Hook Elementary School. Roig-DeBellis contributes to a biweekly educational blog for The Huffington Post and has been honored as a Glamour magazine Woman of the Year and chosen as a “L’Oréal Paris Women of Worth.” In 2013, she received two honorary doctorate degrees and the Dedicated Teacher Award from The Chicago International Conference on Education.