Shop - Becoming Steve Jobs : The evolution of a reckless upstart into a visionary leader (Paperback) 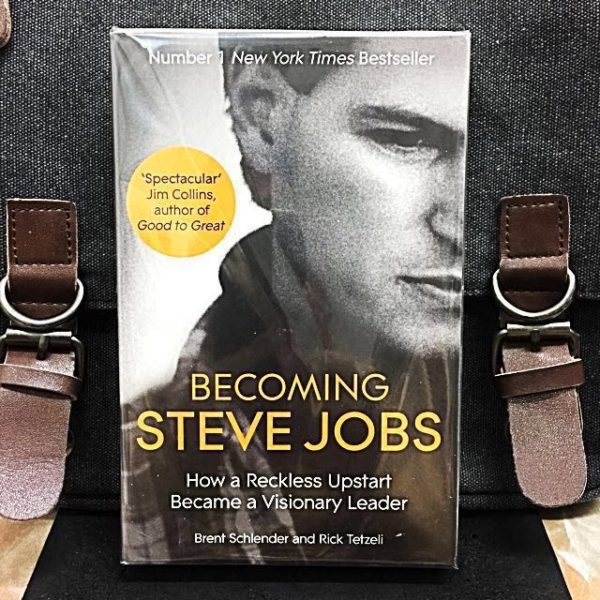 Becoming Steve Jobs : The evolution of a reckless upstart into a visionary leader (Paperback)

How We Got to Now : Six Innovations That Made the Modern World

Becoming Steve Jobs : The Evolution of a Reckless Upstart Into a Visionary Leader
Brent Schlender and Rick Tetzeli
Brand-new, Paperback

This #1 New York Times Bestseller of Steve Jobs biography in paperback bestseller is a bran-new book and still wrapped with new-book plastic wrapper. In addition, this new book is nicely wrapped with protective book-wrapper. This original new book is sold at usual price RM59.79.

Now in paperback, the #1 New York Times bestselling biography of how Steve Jobs became the most visionary CEO in history.

Yet the single most important question about him has never been answered.

The young, impulsive, egotistical genius was ousted in the mid-80s from the company he founded, exiled from his own kingdom and cast into the wilderness.

Yet he returned a decade later to transform the ailing Apple into the most successful company the world had ever seen.

How did this reckless upstart transform himself into a visionary business leader?

There have been many books—on a large and small scale—about Steve Jobs, one of the most famous CEOs in history. But this book is different from all the others.

The first comprehensive study of Jobs’ career following his dismissal from Apple, written with unparalleled access and insight, Becoming Steve Jobs offers a startling new portrait of the most important business figure in modern history. The most intimate biography yet of Jobs, written by the journalist who knew him better than any other, Becoming Steve Jobs draws on recently discovered interviews that have never before seen the light of day, and answers for the first time the most pressing questions about what made this legendary business leader such a success.

“Becoming Steve Jobs” takes on and breaks down the existing myth and stereotypes about Steve Jobs. The conventional, one-dimensional view of Jobs is that he was half-genius, half-jerk from youth, an irascible and selfish leader who slighted friends and family alike.

“Becoming Steve Jobs” answers the central question about the life and career of the Apple cofounder and CEO: How did a young man so reckless and arrogant that he was exiled from the company he founded become the most effective visionary business leader of our time, ultimately transforming the daily life of billions of people?

Drawing on incredible and sometimes exclusive access, Schlender and Tetzeli tell a different story of a real human being who wrestled with his failings and learned to maximize his strengths over time. Their rich, compelling narrative is filled with stories never told before from the people who knew Jobs best, and who decided to open up to the authors, including his family, former inner circle executives, and top people at Apple, Pixar and Disney, most notably Tim Cook, Jony Ive, Eddy Cue, Ed Catmull, John Lasseter, Robert Iger and many others.

In addition, Brent knew Jobs personally for 25 years and draws upon his many interviews with him, on and off the record, in writing the book. He and Rick humanize the man and explain, rather than simply describe, his behavior. Along the way, the book provides rich context about the technology revolution we all have lived through, and the ways in which Jobs changed our world.

Schlender and Tetzeli make clear that Jobs’s astounding success at Apple was far more complicated than simply picking the right products: he became more patient, he learned to trust his inner circle, and discovered the importance of growing the company incrementally rather than only shooting for dazzling game-changing products.

A rich and revealing account that will change the way we view Jobs, Becoming Steve Jobs shows us how one of the most colorful and compelling figures of our times was able to combine his unchanging, relentless passion with a more mature management style to create one of the most valuable and beloved companies on the planet.

‘Becoming Steve Jobs is fantastic. After working with Steve for over 25 years, I feel this book captures with great insight the growth and complexity of a truly extraordinary person. I hope that it will be recognized as the definitive history. Ed Catmull, President, Pixar and Disney Animation

Co-authored by Fortune journalist Brent Schlender and Fast Company Executive Editor Rick Tetzeli, and containing exclusive material, this revelatory book will cast an entirely new light on the man behind the most successful company of all time.

BRENT SCHLENDER is one of the premiere chroniclers of the personal computer revolution, writing about every major figure and company in the tech industry. He covered Steve Jobs for the Wall Street Journal and Fortune for nearly 25 years.

RICK TETZELI, executive editor of Fast Company, has covered technology for two decades. He is the former deputy editor of Fortune, and editor of Entertainment Weekly.

Be the first to review “Becoming Steve Jobs : The evolution of a reckless upstart into a visionary leader (Paperback)” Cancel reply