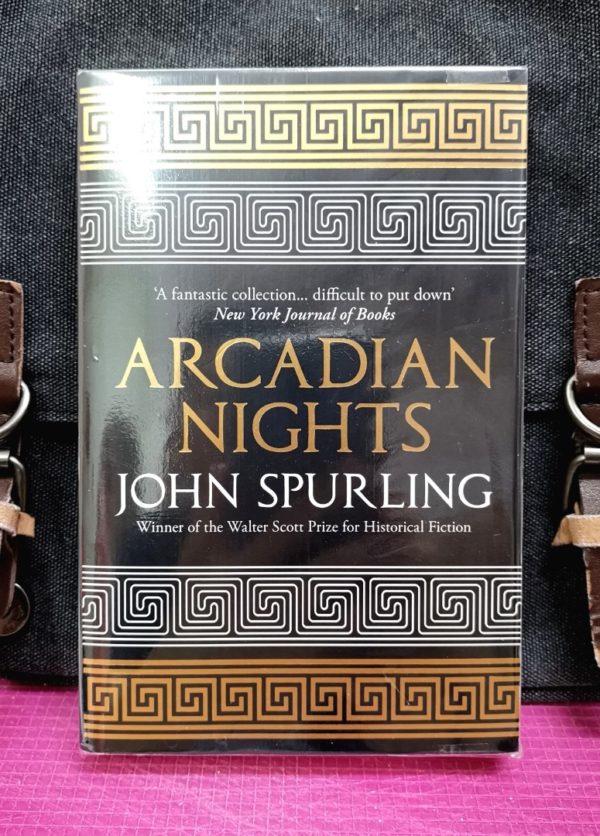 ★★ Winner Of The Walter Scott Prize For Historical Fiction ★★

Our logic and science, our philosophy, politics, literature, architecture, and art are all indebted to the ancient inhabitants of the small mountainous Mediterranean country.

And the powerful myths of the Greeks, refined by Homer, Hesiod, Herodotus, and the great Greek dramatists, still resonate at the core of our culture.

Taking as his starting point many of the famous tourist sites in the Peloponnese, where the stories are set, John Spurling, winner of the 2015 Walter Scott Prize for Historical Fiction, freshly imagines key narratives from the Greek canon, including:
● tales of the doomed house of Atreus (notably Agamemnon, leader of the Greeks at Troy, murdered by his wife in his palace bathroom);

● of the god Apollo; goddess Athene;

● Theseus, scourge of the Minotaur;

● the Twelve Labors of Heracles; and

In this vibrant, gripping and often grisly retelling of the Greek myths, stories of murder, power, revenge, love, and traumatic family relationships are made new again for our time with wit and relish by a gifted author.

Spurling has added scene, dialogue, and context, while always staying true to the spirit of the original myth.

This is wonderful modern rendering of the classical Greek myths with all the popular Greek characters.

Many of us heard about Greek myths (Zeus, Hercules, Perseus, etc). Even legendary Trojan war is part of Greek mythology.

It is simply astonishing how sophisticated and detailed are these Greek myths. In comparison to Greek myths “Game of Thrones” feels like a knockoff.

Whats new is the other tit bits of information like modern geography, history and cultural customs in relation to ancient Greece.

The language use is witty, funny and very easy to read. The individual chapters are small and the book can be read in small portions, one tale at a time.

There are five sections: Agamemnon, Apollo, Hercules, Perseus, and Theseus. Each has slightly different charms to offer.

The themes are so different than what we care about today: cannibalism, incest, and blood murder.

The ancient hero had to be strong, skilled, witty, and smart. Hercules was my favorite because his adventures seem quite free of logic, and cause and effect; I feel certain that his stories were drawn from ancient sources.

The best aspect of this book is Spurling’s narration. He fills in the story with likely details, and occasionally winks at the reader when he has to cover for some contradiction in the source material. He sneaks in literary criticism in the guise of an omniscient narrator.

In “Arcadian Nights” John Spurling revisits some of the famous myths and provides funny and down-to-earth interpretations of events described in those stories. Greek myths are great tragic, human stories.

You read this book without effort. It just flows. Mastery of language and writing style are so good that it feels as if you are reading children’s book.

By Gregory A. Staley

In the second century A.D., the Roman Aulus Gellius traveled to Athens and there, on long winter nights, compiled a “literary storehouse” which he titled “Attic Nights,” named for the region in Greece of which Athens is a part.

His work is a collection of miscellaneous observations about grammar, some favorite quotations from literature, and a few anecdotes about famous thinkers of the time.

Spurling, a playwright, author of novels, and regular reviewer himself, was inspired to “reimagine” Greek myths after he and his wife bought a house in southern Greece, in the area known as Arcadia.

Spurling had studied in Greece as a student, and his grandfather had, a century earlier, published a history of Greek culture titled The Glory That Was Greece.

In returning to Greece, Spurling was therefore making both a personal and a cultural journey back to his roots.

He acknowledges that his was the last generation to be educated in the Classics and that many today do not know the stories at the heart of so much in Western culture.

In a sense, he is trying to do for a new century what Edith Hamilton did when she published Mythology in 1942, and what others — from Ovid to Bulfinch and Robert Graves — have also done.

What potentially makes Spurling’s version unique is the fact that he rewrites these tales in the places where they were set.

The word “myth” has for a long time been associated with lies and falsehoods (Plato set the trend).

Yet, as Martin P. Nilsson showed in 1932, these myths are set in towns and regions that really existed at the time of their creation.

“Sitting on our terrace in Arcadia,” Spurling writes, “overlooking the gulf of Argos, I had thought of seeing Agamemnon’s great fleet leaving for Troy.”

His base in Greece shapes his retellings in two ways: in his selection of stories and in his occasional musings on their local settings.

Spurling chooses to concentrate on the family of Pelops, who gave his name to the “Peloponnesus” (Pelops’ Island), the southern section of Greece in which Arcadia is located, and whose famous descendants included Atreus, Thyestes, Agamemnon, and Orestes.

Spurling also includes Perseus, Theseus, and Heracles, the famous heroes whose connections with the region are more varied.

This is, therefore, not a complete “mythology,” nor a comprehensive look at classical myths, starting with the creation of the world and ending with the founding of Rome.

Spurling’s best moments come when he connects these ancient stories with their settings.

When discussing Apollo, for example, he describes his shrine overlooking the Myrtoan sea in a location where subsequently there was built a chapel of the prophet Elijah.

There are surprising connections between these two figures: Elijah in Greek is “Elias,” and both Apollo and Elijah drove fiery chariots.

The Mediterranean was the seedbed for many of the religions which are still dominant today; not surprisingly, archaeology discovers not just an historical stratigraphy but also a cultural one.

Myths have strata, too, but we are continually building them from above in addition to excavating them from below.

Greek myths have occupied such a dominant position in later cultures in part because they were not recorded in sacred books; it was not a sacrilege for them to be told differently by those who came later and who were not part of their original culture.

Spurling is, in short, in good company in reimagining these enduring tales. He is quite right to assert that his versions should be read for entertainment and not as a reference guide to the precise ways in which the stories were originally told in antiquity.

My problem with his approach is that his retellings are often not very entertaining.

Spurling does not start at the beginning with the creation of the gods and, therefore, his narrative regularly has to pause to fill in gaps, to provide background, and to sketch his cast of characters.

It helps to have a family tree to understand the family of Tantalus and Pelops, especially given the incest and adultery that characterize it, but we are not given one.

As a classicist, it would be easy for me to find narrative errors (his Demeter does not eat part of Pelops, and he confuses Deianira, Hercules’ wife, with another woman of that name who was an Amazon), but my greater concern is with the quality of Spurling’s storytelling.

His style and register often shift, seeming Disneyesque when he tells of Heracles’ hunt for the stag or vulgar when he describes the potent lovemaking of Heracles and the Amazon Hippolyte.

He periodically inserts historical, religious, and linguistic commentaries into his stories; he notes that the first part of Heracles’ name derives from “Hera,” but he does not proceed to point out that Hera’s name is a feminine form of the Greek word “hero,” nor that the last part of Heracles’ name means “glory.” Spurling’s narratives are often plodding and so dense with names that it is easy, quite literally, to lose the plot.

When I began to read, I thought that perhaps Spurling was writing a Greek version of Under the Tuscan Sun or A Year in Provence, with myth as the vehicle for talking about local color and landscape. When this book occasionally took on that tone, I enjoyed it very much. Too often, however, we find a more prosaic account of stories that were better told by Homer and Ovid.

About the Author
John Spurling is the author of many novels and plays, including The Ten Thousand Things, winner of the 2015 Walter Scott Prize for Historical Fiction. His plays have been performed on stage, television, and radio, including at the National Theatre. He lives in London and Arcadia, Greece, with his wife, biographer Hilary Spurling.

Be the first to review “Arcadian Nights” Cancel reply