Shop - All The Rage : Buddhist Wisdom On Anger And Acceptance 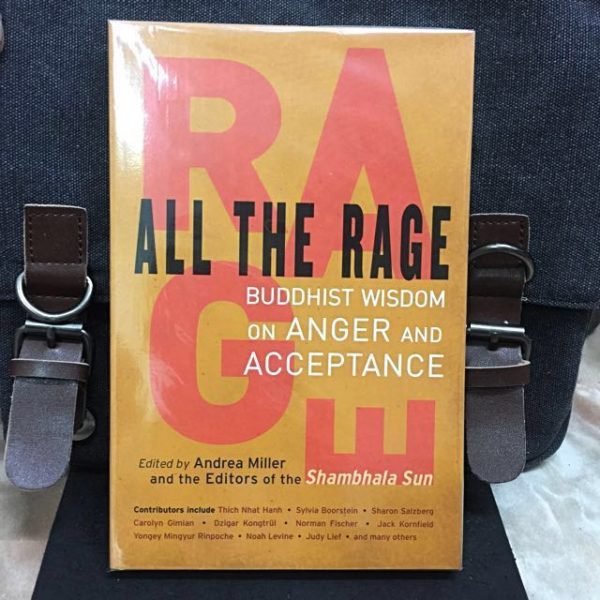 All The Rage : Buddhist Wisdom On Anger And Acceptance

The Mosaic Principle : the Six Dimensions Of A Remarkable Life And Career

Messy : How To Be Creative And Resilient In A Tidy-Minded World
Andrea Miller
BRAND NEW, PAPERBACK

How To Manage Anger And Turn It Into Compassion

This anger and inner-self management guide book in paperback edition is a bran-new book and nicely wrapped with protective book-wrapper. The original new book is sold at usual price RM80.10. Now here Only at RM22.

Highly Recommended for those who let anger become part of their lives and eventually “Anger” control them and dictate consciously or unconsciously in their lives.

Leading psychologists and meditation teachers explain how mindfulness can help us work with our anger–and ultimately transform it into compassion.

We normally operate under a common illusion that things that make us angry lie outside ourselves, that they are external to us.

Their fault…Something out there is in opposition to our need for safety and security; it threatens our comfort or position. We feel a need to defend our vulnerable selves.

But, seriously… Anger limits us , Anger ruins us…

But if we have the courage to look at our anger and its causes and to learn from it, we can develop an open heart – a heart of genuine compassion.

Anger. For all of us, it’s a familiar feeling—jaw clenching, face flushing, hands shaking. We feel it for rational and irrational reasons, on a personal and on a global level. If we know how to handle our anger skillfully, it is an effective tool for helping us recognize that a situation needs to change and for providing the energy to create that change. Yet more often anger is destructive—and in its grip we hurt ourselves and those around us.

In recent years scientists have discovered that mindfulness practice can reduce stress, improve mood, and enhance our sense of well-being. It also offers us a way of dealing with strong emotions, like anger.

This anthology offers a Buddhist perspective on how we can better work with anger and ultimately transform it into compassion, with insight and practices from a variety of contributors, including :
● Thich Nhat Hanh on how anger grows in us because we feed it through certain habits
● Sakyong Mipham Rinpoche on while there is always something to complain about, blaming others will never bring about peace or happiness
● Sylvia Boorstein on how there are no human enemies, only confused people needing help.
● Pema Chadran on how when something goes wrong and we want to blame someone or someone else, we could instead take responsibility for our own tendency to blame.
● Tara Bennett-Goleman on how the first step in dealing with our anger is to compassionately accept ourselves and how we’re feeling
● Pat Enkyo O’Hara on how there will always be a potential energy within us. How we use this energy is the key to how we affect our own life and the lives of others
● Jules Shuzen Harris on how meditation practice can help us find some space between what triggers our anger and our reaction
● Christina Feldman on how it is difficult to release our anger, yet it’s a much greater hardship to hold on to it
● Mark Epstein on moving beyond doer and done to
● Ezra Bayda on how there is no solid “self”–there is no “self” forgiving another “self.” Waking from this illusion, we step into the universal heart, the essential fact of our basic connectedness. We discover that forgiveness is our true nature.
● Judith Toy on her struggle to make sense of the murder of three family members and how she found Zen and forgiveness along the way
● Stan Goldberg on how life doesn’t last forever. If we’ve done something to hurt others or if others have hurt us, now is the time to ask for forgiveness.

A collection of essays above are dealing with anger, blame and forgiveness. There are a whole lot of different authors coming from a whole bunch of different angles.

Not all of them are saying the same thing, but the overall tendency is toward letting go, accepting the world and other people instead of trying to make them who we want them to be.

The book is structured in such:

The first section, “Understanding Anger,” looks at the origin of this emotion and how it impacts our relationships and sense of well-being. Thich Nhat Hanh begins by explaining that in our subconscious mind, we all have negative seeds such as anger, yet we also have positive seeds such as joy, understanding, and compassion. Whenever one of our seeds manifests in our conscious mind, that seed becomes stronger and more likely to manifest again. We cannot eradicate any particular seed, says Thich Nhat Hanh, but we can choose which seeds to water.

Part 2, “Practicing with Anger,” focuses on concrete methods. The teachings in this section include Sister Chan Khong’s “Beginning Anew,” which emphasizes communication. We can learn to listen openly to the grievances others have against us, she says, and likewise we can learn to express our hurt or angry feelings without lashing out. In this way we find solutions to problems rather than add fuel to the fire. “Practicing with Anger” also features lively first-person pieces that provide examples of Buddhist practitioners grappling with anger in daily life. In her interaction with her young son, Karen Connelly sees that she gets back whatever emotion she herself expresses. Through his misadventures with irksome members of his sangha, Shozan Jack Haubner discovers that the people in our life don’t get in the way of our spiritual practice; these people are our spiritual practice.

“Going Beyond Blame” is the third section. It focuses on letting go of blame at both the personal and societal levels. In “No Blame,” Sylvia Boorstein gets to the heart of the matter: The results of ignorance—greed, hatred, and delusion—are the real causes of conflict, not particular people, political parties, or countries. So while there may be people who we could name—and blame—as culprits, we would all be better served by recognizing ignorance as the true enemy. Grounded in this understanding we would then be inspired to right any wrong doing in a way that is at once firm and loving.

Part 4, “Finding Forgiveness,” deals with softening our anger to- ward those who have hurt us. Moreover, since many of us carry around guilt for past actions, this section also deals with forgiving ourselves. It’s important to remember that forgiveness isn’t about condoning harmful behavior but, rather, attending to our own hurt and thereby recognizing that the person who harmed us also hurts. Forgiveness, when approached in this way, is an important step in finding resolution, and Judith Toy illustrates this perfectly in her moving story. She lost three family members in a calculated murder, and it was only through forgiving the perpetrator that she was able to heal.

The anthology’s final section is about cultivating compassion, especially in the face of anger and aversion. The pieces in this section are full of love, though not the airy-fairy hearts-and-flowers kind. This love is one that can endure the real and often difficult world. The Buddhist teacher Noah Levine looks back on the dangerous years he spent high on drugs and frequently in jail, and he concludes that loving-kindness doesn’t protect us from being physically hurt. It does, however, protect us from hatred and all of the suffering that comes with such hatred and in that way loving-kindness does make the world a safer place.

About the Author
ANDREA MILLER is an editor and staff writer for Shambhala Sun magazine and the editor of Right Here With You.

Be the first to review “All The Rage : Buddhist Wisdom On Anger And Acceptance” Cancel reply