Shop - ALL THAT FOLLOWS : A Novel 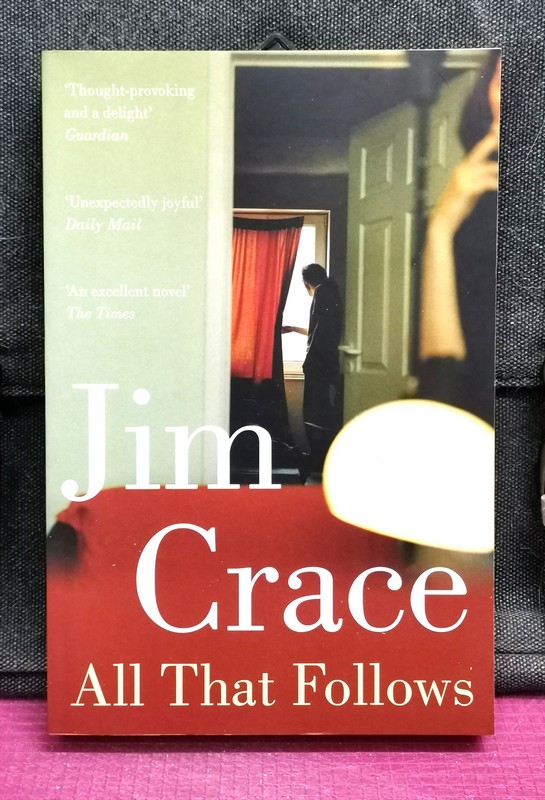 ALL THAT FOLLOWS : A Novel

POWERFUL : Building A Culture Of Freedom And Responsibility (Sean-02)

Critically acclaimed author Jim Crace returns with a masterful and tender new novel that explores the improvisational power of jazz and the complexities of love and violence.

British jazzman Leonard Lessing spent a memorable yet unsuccessful few days in Austin, Texas, trying to seduce a woman he fancied. During his stay, he became caught up in her messy life, which included a new lover, a charismatic but carelessly violent man named Maxie.

Eighteen years later, Maxie enters Leonard’s life again, but this time in England, where he is armed and holding hostages. Leonard must decide whether to sit silently by as the standoff unfolds or find the courage to go to the crime scene where he could potentially save lives.

The lives of two mothers and two daughters—all strikingly independent and spirited—hang in the balance. Leonard Lessing once cast a spell on stage, hypnotizing crowds with his improvised jazz, easy in his music, at home in the moment.

Now, home is somewhere he never leaves. His sax is silent, his marriage faltering, his stepdaughter vanished, and his life shrinking – until one afternoon the TV brings news he can’t ignore. A figure from his firebrand past has arrived in town, with hair-raising results. Can Leonard face the limelight one last time?

Leonard Lessing is a British jazz musician whose life has become largely predictable and stagnant. While watching the news one night he recognizes a man who is holding four hostages. The man is Maxie, a former acquaintance who he met eighteen years previously in Austin, Texas.

When he meets up with Maxie’s daughter Lucy, Lennie must decide whether to sit silently, as he has so many times, or find the courage to go to the crime scene and potentially save lives. Set in Texas and the suburbs of England, All That Follows is a novel in which tender, unheroic moments triumph over the more strident and aggressive facets of our age.

It also provides moving and surprising insights into the conflict between our private and public lives and redefines heroism in this new century. It is a masterful work from one of Britain’s brightest literary lights.

A moving and insightful novel, All That Follows proves once again that Jim Crace is one of our most talented and dynamic storytellers.

In this near-future novel, British author Crace (The Pesthouse, 2007, etc.) examines the meaning of courage for one jazz musician.

As a young tenor sax player, Leonard Lessing alternated among composing, gigging and political activism. In 2006, he followed fellow activist Nadia from England to Austin, Texas, believing they might have a future together.

Fat chance. Nadia had already hooked up with Russian-American Maxie Lermon, a violence-prone faux-leftist who corralled Leonard into a three-person anti-Bush demo to prove his manhood. Maxie was disabled, Nadia arrested; Leonard, highly principled but too well-mannered for the barricades, fled the scene.

Where Leonard could prove himself was onstage. Years later, in England, his quartet stranded by bad weather, he played a gig alone for a full house and a radio audience. His performance was a triumph. “Valiant,” said an unknown audience member, Francine, who would become his wife.

Crace begins his story in 2024; Leonard and Francine have been married nine years. Suddenly, Maxie re-enters Leonard’s life. He’s in the news for having taken some hostages in a nearby town to protest an upcoming summit.

Aside from that long Texas flashback, the novel focuses on Leonard’s bumbling attempts to defuse the crisis, with the help of Maxie’s 17-year-old daughter Lucy. For an author much respected for his groundbreaking work, this is a surprisingly conventional story, one that leaves us with a nagging feeling that Crace hasn’t fully engaged with his theme.

Leonard is a dreamer; his favorite fantasy is fighting fascism in the Spanish Civil War. Maxie is a brutal man of action; but in making him a loud-mouthed bore, hasn’t Crace stacked the deck? Lucy is vibrant (she has her own reckless adolescent courage), but the older women, Nadia especially, are sketchy.

The near-future setting is little more than an embellishment. Though Crace is never dull, nothing else catches fire like that wonderful description of Leonard’s solo gig.

Leonard Lessing, the British protagonist of Crace’s surprisingly bad 10th novel (after The Pesthouse), has Walter Mitty–like dreams of being a revolutionary that are invariably short-circuited by his fear of making a disturbance.

In 2006, Leonard, while in Austin, Tex., to reconnect with ex-flame Nadia, is bullied into assuming the role of activist by Maxie, the founder of Snipers Without Bullets, who is living with Nadia and who has gotten her pregnant.

Though Maxie appalls Leonard, he nevertheless halfheartedly takes part in an action against Laura Bush that leads to Nadia’s arrest and her daughter, Lucy, being born in prison.

Eighteen years later, Leonard sees a news story about Maxie, who has taken a British family hostage. While gawking at the proceedings, Leonard runs into Lucy and gets drawn, once again, into a cockeyed scheme that begins Leonard’s unlikely reunion with Nadia and a partial, ironic fulfillment of his dream of being an iconic radical.

Unfortunately, Crace’s novel is held hostage by the listlessness that emanates from chickenhearted Leonard and the embarrassing stereotypes that clutter many of the scenes, especially those set in Texas.

This is a feeble effort for a novelist of Crace’s stature.

Jim Crace is the author of nine previous novels, including most recently, The Pesthouse. Being Dead was shortlisted for the 1999 Whitbread Fiction Prize and won the U.S. National Book Critics Circle Award for Fiction in 2000. In 1997, Quarantine was named the Whitbread Novel of the Year and was shortlisted for the Booker Prize. Jim Crace has also received the E.M. Forster Award, and the Guardian Fiction Prize. He lives in Birmingham, England.