Shop - After Mandela : The Struggle for Freedom in Post-Apartheid South Africa 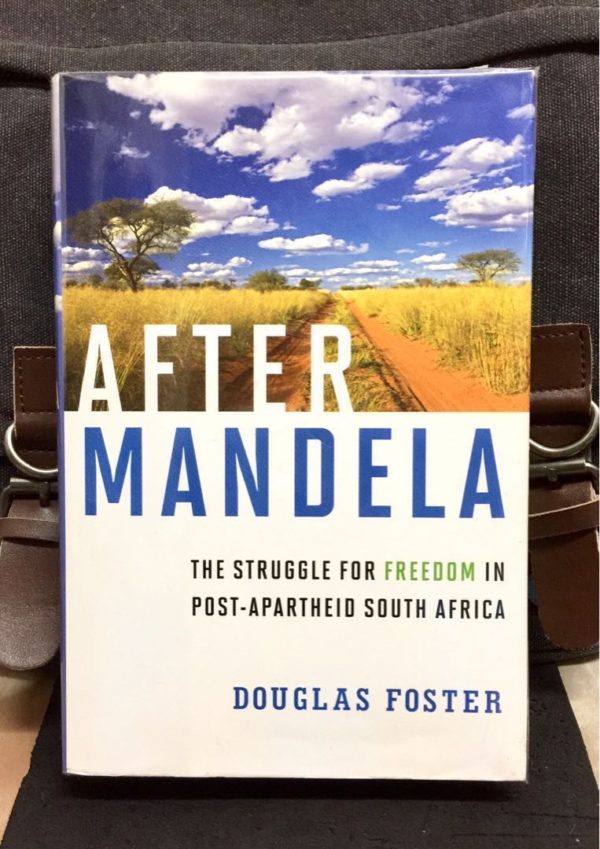 After Mandela : The Struggle for Freedom in Post-Apartheid South Africa

Resilience : Reflections on the Burdens and Gifts of Facing Life’s Adversities

Insightful & Honest Exposure on The Future Of “Rainbow Nation” After Mandela

This Washington Post bestseller in hardcover edition is a bran-new book and nicely wrapped with protective book-wrapper. The original new book is sold at usual price RM150.68. Now here Only at RM20.

This is a well-written work that strives to present the situation in post-apartheid South Africa in a brutally honest manner.

The most important historical and journalistic portrait to date of a nation whose destiny will determine the fate of a continent.

A brutally honest exposé, After Mandela provides a sobering portrait of a country caught between a democratic future and a political meltdown.

Recent works have focused primarily on Nelson Mandela’s transcendent story. But Douglas Foster, a leading South Africa authority with early, unprecedented access to President Zuma and to the next generation in the Mandela family, traces the nation’s entire post-apartheid arc, from its celebrated beginnings under “Madiba” to Thabo Mbeki’s tumultuous rule to the ferocious battle between Mbeki and Jacob Zuma.

Foster tells this story not only from the point of view of the emerging black elite but also, drawing on hundreds of rare interviews over a six-year period, from the perspectives of ordinary citizens, including an HIV-infected teenager living outside Johannesburg and a homeless orphan in Cape Town.

Foster does this from various levels, connecting with individuals and weaving their narratives into a tale that encompasses all levels of society in South Africa. From the poorest street kid to the privileged children of political leaders, Foster manages to ingratiate himself with the local populace and present the unique and varied perceptions of the state of South Africa. Coming to a conclusion that symbolizes the spirit of South Africa and progress, this book continuously forces you to stop and reassess your thoughts and opinions.

Douglas Foster did a remarkable job telling us the story of a vibrant nation, full of contrasts and contradictions of wealth and poverty, and the diversity. To tell this story, Foster provided documents and narratives of three different groups of people: disadvantaged youth (street kids); political leaders and their family; and civil-society activists. Foster also talked about the epidemic of AIDS/HIV, his views on politics, and the economy.

This is the long-awaited, revisionist account of a country whose recent history has been not just neglected but largely ignored by the West.

What Foster does that’s remarkable is two-fold:
● He gets access to Jacob Zuma in a way that to date no one else really has, and

● He reaches out to a younger generation of political families and gets ten on the record in a way that will certainly be fascinating to look back upon.

Arguably the third thing he does that’s remarkable is telling stories of ordinary South Africans in conjunction with these other two pieces, and there’s certainly an importance to that. The degree of enthusiasm with which renowned journalist and academic Prof. Douglas Foster grapples with the question from the grassroots level both enlivens the text and motivates the reader to probe the complexities of such a diverse and complex society.

Prof. Foster seeks to replace the international mood of general angst about South Africa with some hope that the strengths of its leadership and the resilience of its people will outpace potentially growing instability. He believes this will help ensure that it continues to thrive as both a major economic and political role player on the African continent in the 21st century.

In other words, the author, does a decent job of reporting the complex problems facing this emerging, post-apartheid, nation:
➽ HIV disease;
➽ political corruption;
➽ government vs private operation;
➽ how the media is run and who controls it;
➽ education and how/who gets to be educated and the level of education;
➽ the scarcity of healthcare for the poor;
➽ and bridging cultural differences between city-dwellers and the “tribal” mindset of rural Africa (polygamy, and women’s rights).

The book can be broken into two main sections:

● one on the political aspects of the new nation and how it has managed to continue the hopes and dreams of not only Mandela but the original founders of ANC; and, the infighting of ANC;

● and another, a story about the trials and tribulations of several young black Africans, some living with AIDS, as they navigate their places in this new world as free-borns, in a post-apartheid South Africa. Their stories were the most captivating, and even endearing and heart-rending at times.

Author’s viewpoint is extremely well balanced. A journalist with foreign roots and a solid reputation in his profession, he has a salient and insightful perspective relatively untarnished by the degree of propaganda permeating the country’s official media channels, which, in some cases, appear as warped and distorted in their reportage now as they ever were under the preceding apartheid regime.

The sense of immediacy of Prof. Foster’s work makes reading the fluent text riveting. His writing is so clear that even those who know little of the climate and layout of the country, topographically or politically, can quickly master the ebb and flow of this trouble laden yet promising country that has only within the last two decades started to emerge from its turbulent past.

His familiarity with the colloquial languages of South Africa allows him to use expressions in a lively and informative way. For example, his introduction to the book, rather musically referred to as the “Overture,” is titled “Baleka Uzohaqwa!” meaning “Escape Before You Are Injured!” He is clearly at ease and confident in his writing, a reflection of many years spent as both an academic and a journalist.

With After Mandela: The Struggle for Freedom in Post-Apartheid South Africa, Prof. Foster aims to offer fresh insights into both the staying power and the weaknesses that characterize the Jacob Zuma government—especially in light of other key leaders also directly responsible for the evolution of the country as a democratic state.

What a pleasant surprise to encounter a book that actually looks beyond the surface of South Africa’s by now well-known story. We’ve read so many accounts of the miraculous transformation of the hideous apartheid state into the rainbow democracy and, in the nearly two decades since that happened, of the flies in the ointment that have marred the fairy tale.

In his many visits to South Africa over the last eight years and the year he spent living there, California journalist Douglas Foster, former editor of Mother Jones, has gained a superb understanding of the complexities of South African society. Though never underestimating the burden laid upon present-day South Africa not just by 45 years of apartheid but by centuries of segregation, he has wisely chosen to concentrate on the chaotic present and immediate past as well as trying to see what a very uncertain future might hold.

Foster gives us a portrait of a vibrant nation, full of contrasts and contradictions, of wealth and poverty, of diversity and sophistication alongside ingrained attitudes and resistance. He doesn’t hesitate to point out clay feet in even such idols as Nelson Mandela, who failed to address the scourge of AIDS, which was ravaging South Africa during his presidency. The farcical policy of his successor, Thabo Mbeki, with its rejection of anti-retroviral drugs, defies logical explanation, here as elsewhere.

Foster shows us a country blessed with a wonderful constitution, ensuring freedoms of all kinds. But that noble document is beleaguered, its permissiveness under attack from religious zealots and other bigots: Even its treasured press freedom is threatened by the very leaders sworn to uphold it. A fine constitution is all very well, but even ours was of little help in the 1950s against Sen. Joseph McCarthy’s witch hunt and Mrs. Shipley’s passport bureau. As we read Foster’s account of confronting President Jacob Zuma on his efforts to curb freedom of expression by the press, it is all too clear that hard-won liberties are now endangered.

When he has one of his many talks with Zuma, he notes the rarefied environment of the governing elite:

“The vast government compound outside Pretoria is known as Bryntirion Estate. Top government officials, including the president and cabinet ministers, lived there in a bucolic, parklike setting with little traffic, no crime, clean air, and plenty of open space between the grand residences. No wonder they sometimes seemed cut off from the daily realities of the people they governed.”

Given his choice between magnificent colonial relic residences in Pretoria, Cape Town and Durban, it is not surprising that Zuma, in the words of his senior wife, had “set aside ‘the land of cobras and honey’ [his rural family home] for more rarified surroundings.”

Trying to avoid putting 1980s South Africa into one of her favored boxes of authoritarian versus totalitarian, the late Jeane Kirkpatrick correctly put her finger on the essential nature of apartheid South Africa by saying that it was an oligarchy. It is clear from the detailed picture in Foster’s book that it remains one, the only difference being that today there are some black as well as white oligarchs, the former holding most of the political reins while the latter largely still control the nation’s wealth.

Foster notes that the ANC has gone from game changer to representing the establishment, perhaps an inevitable trajectory in what is, despite the newfound robust democratic institutions, effectively a one-party state:

“By 2012, eighteen years after its leaders were vaulted into power in the first place, the African National Congress was no longer in transition.… You could tell plenty about the party’s deep-seated values from watching the leaders who had emerged from its ranks…. [Zuma’s] ambition now was to be seen as the heroic figure who managed to ease the country into its post-Mandela, post-Mbeki, and even post-Zuma reality…. Yet, on at least three essential counts — gender equality, media freedoms, and judicial independence — it was quite clear that the president could never be the nation’s reliable guide.”

To his credit, Foster pulls no punches on the failure of successive presidents to deliver a larger slice of the pie to the deprived majority. He is also fearless in putting his questions to the president, but given the nature of Zuma’s evasions and excuses, it is no wonder that, at its conclusion, the book looks beyond the democratically elected leaders to the demos, the people of South Africa, and its essential spirit:

“It would take someone from the next generation to see things from a fresh angle and in a different light.… The ideal of a nonracial, nonsexist, egalitarian society at the southern tip of Africa lived on. Young South Africans would determine if that big idea, and everything it implied, would vanish, or yet prevail.”

“After Mandela” makes it clear that this idea enduring is not only key to a peaceful developing South Africa but indeed to the whole continent. In fact, the stakes in that noble experiment’s success are high for all of us, wherever we happen to live.

About the Author
Douglas Foster, an associate professor at Northwestern University’s Medill School of Journalism, is a contributor to The Atlantic, New York Times Magazine, Los Angeles Times, and Smithsonian. He lives in Chicago, Illinois.

Be the first to review “After Mandela : The Struggle for Freedom in Post-Apartheid South Africa” Cancel reply